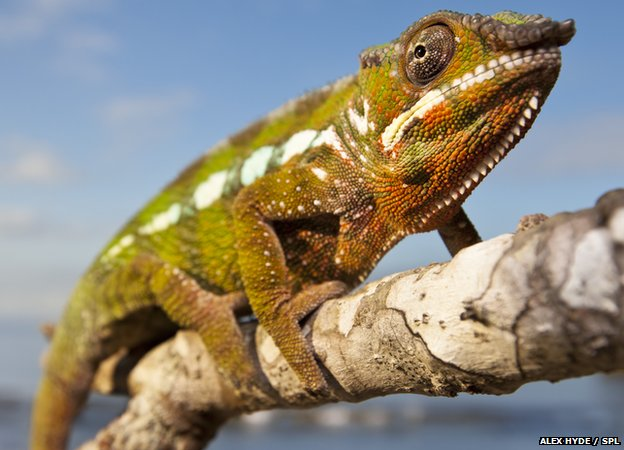 Scientists have discovered that chameleons rearrange crystals inside specialized skin cells to change colors. via BBC

Swiss researchers have discovered how chameleons accomplish their vivid colour changes: they rearrange the crystals inside specialised skin cells.
It was previously suggested that the reptiles’ famous ability came from gathering or dispersing coloured pigments inside different cells.
But the new results put it down to a “selective mirror” made of crystals.
They also reveal a second layer of the cells that reflect near-infrared light and might help the animals keep cool.
Reptiles make colours in two ways: they have cells full of pigment for warm or dark colours, but brighter blues and whites come from light bouncing off physical elements like these crystals: so-called “structural colours”.
These colours can also be mixed. A vibrant green might arise from a structural blue overlaid by yellow pigment.

Published in the journal Nature Communications, the study was a collaboration between quantum physicists and evolutionary biologists at the University of Geneva.
First of all, the team noticed there were no big, spidery cells containing yellow or red pigment that could explain the shifts in hue.
They hit upon the importance of the crystals when they looked inside a type of cell called an “iridophore” using an electron microscope. Whichever angle they looked at them from, the crystals formed an incredibly neat, regular pattern – just the sort of arrangement that creates structural colours.
“When you see this with the eye of a physicist, you know it will have an effect on light,” said senior author Prof Michel Milinkovitch.
So Prof Milinkovitch and his colleagues set out to establish whether these crystals might explain not just the chameleon’s bright colours, but its changes to those colours as well.

Looking closely at video footage of the colour changes, they saw a pattern (from blue, through green, into yellow and orange) that could not be explained by the pigments available in the chameleon’s skin. But when they modelled what changes might be produced by shifting the spacing of the crystals, they found a very close match.
And, crucially, when they compared a tiny piece of “relaxed” chameleon skin with a sample from the same animal when it was “excited” (showing off in front of another male), there was an obvious change in the crystal pattern.
“The net effect is that it will work as a selective mirror,” Prof Milinkovitch told the BBC.
“Light will go through except for very specific wavelengths. If the distance between the layers is small, it reflects small wavelengths, like blue; if the distance is large it reflects larger wavelengths – for example, red.”

Comments Off on Chameleons Change Colors With Crystals