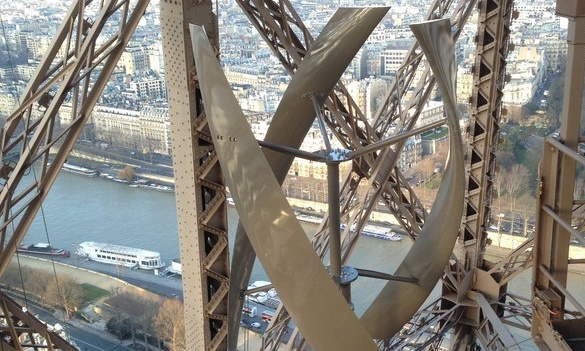 One of the world’s most iconic sites has become the latest high profile venue to embrace renewable energy, after the installation of two vertical axis wind turbines as part of the Eiffel tower’s high profile renovation project.

US-based onsite renewables specialist Urban Green Energy (UGE) announced on Tuesday that it has fitted two turbines at the site capable of delivering 10,000kWh of electricity annually, equivalent to the power used by the commercial areas on the Eiffel tower’s first floor.
The company said the two UGE VisionAIR5 turbines are “virtually silent” and have been painted to match the rest of the tower.

It added that the site for the turbines 400 feet above the ground had been strategically chosen to maximise energy production and allow the turbines to take advantage of relatively steady winds.

Vertical axis wind turbines tend to deliver lower outputs than conventional turbines, but they are designed to operate in urban areas where winds tend to be less predictable and can come from multiple directions.
Nick Blitterswyk, chief executive of UGE, said the project represented something of a publicity coup for the global renewables industry.

“The Eiffel tower is arguably the most renowned architectural icon in the world, and we are proud that our advanced technology was chosen as the Tower commits to a more sustainable future,” he said in a statement. “When visitors from around the world see the wind turbines, we get one step closer to a world powered by clean and reliable renewable energy.”

The wind turbines form part of a major green retrofit project for the Eiffel tower, which has seen it also install energy efficient LED lights and a 10 metre squared solar thermal array that will provide around half of the hot water needs of the site’s two pavilions. In addition, heat pumps have been installed to heat the facilities and a rainwater recovery system has installed.