NeoPixels at a Distance: Line Drivers and You

Heya folks, Crow here.  In the autumn of 2014 I constructed an outdoor under-eave NeoPixel display string using two 5-meter reels of WS2812B LEDs (150 pixels each) for a total of 300 RGB pixel elements.  These are powered at each end by a 5-volt 10-amp DC supply and are bridged at the middle where the two 5-meter lengths connect.  The overall resistance in each power conductor’s 10-meter total length is about 7.5 Ohms, or about 15 Ohms for both 5V and GND.  This inline impedance is sufficient to act as the ballast between two power supplies which ordinarily use “auctioneering” diodes or power resistors to deal with the slight imbalances that exist between the supplies as no two power supplies are precisely equal.  At the power ends of each LED strip are the suggested DC filter capacitors (I use 2200 uF/35V units as I had them on hand) but I also placed one at the bridging midpoint where the voltage drop would be the highest.  This way I managed to obtain a uniform LED brightness across the entire length. 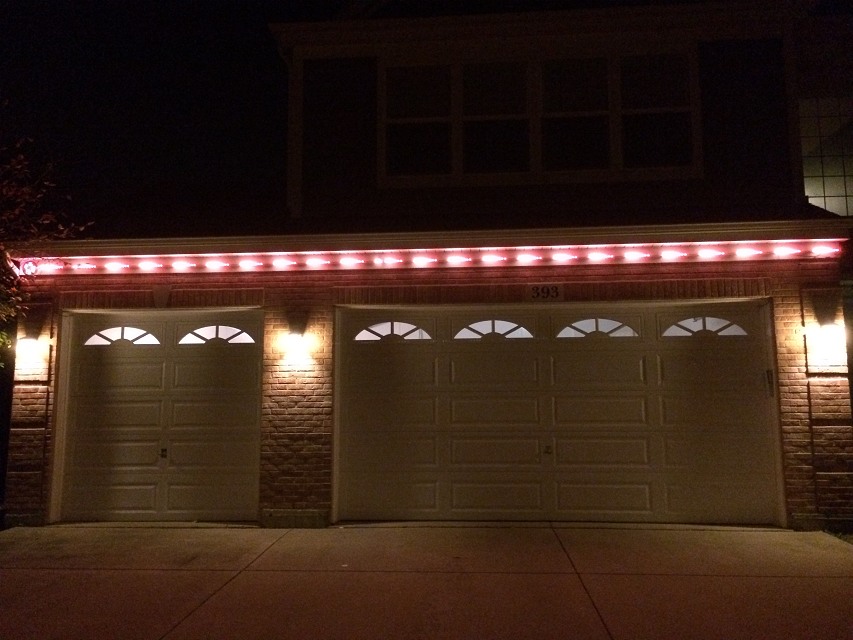 There was a second issue to deal with, however.  The microcontroller host device was located inside the garage, needing about 4 meters of signal driving cable from the host driver output to the first WS2812 LED.  Trying to drive this as straight TTL (5-volts) was somewhat unreliable as the line length was sufficient so as to get a bit of a SWR (“standing wave ratio,” a measure of reflected power) at 800KHz.  I was able to trim this sufficiently using Zobel networks, that is, a series R-C filter across the transmission line at the driving and receiving ends to attenuate the ringing reflections, but I wanted a more elegant solution that did not need custom impedance matching.  My WS2812 host driver board has a MAX232 chip on hand to talk to a serial-to-wifi gadget, but it had an unused second full duplex channel.  I connected the WS2812 frame buffer serial data output to the transmit side of the MAX232, which can drive an 800KHz signal reliably to about 10 meters.  At the remote/LED end I made a small PC board that housed power connectors. a coaxial signal jack, JST and barrier headers for the LEDs as well as a venerable yet still useful MC1489A RS-232 line receiver chip.  This way I am able to deploy WS2812 strings that require some length of data transmission cabling without having to tinker with reflected power issues.  The data cable is a common RCA coaxial audio cable.  When I have a better codebase for the controller I will toss all this up on github.  –Crow

Comments Off on NeoPixels at a Distance: Line Drivers and You