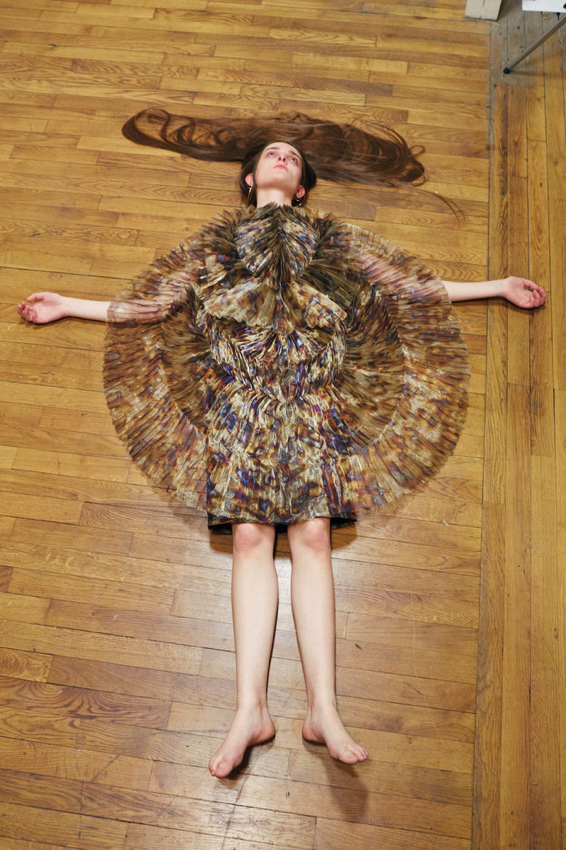 Iris van Herpen is one of our favorite designers – she combines technology, science, architecture and more in her unique and beautiful designs. T magazine recently did an excellent piece on the designer.

It began with a hollow whistling noise, the kind blockbuster directors and acoustic engineers have pretended outer space sounds like for decades. Out of the dark emerged a girl encased in a transparent peplum crinkle top and matching mist-colored skirt, the frayed hem of which resembled fog from a distance and ostrich feathers up close. Many of the outfits that followed were similarly tonal and textural: a crimson bodysuit with an origami-like neck; a black plastic dress with hundreds of fine spikes that gave it the appearance of having a fuzzy corona, like a cactus. As the show progressed, the creations became increasingly bizarre — transparent torso covers, face-obscuring headdresses, protrusions that can only be described as “pectoral fins.”

None of it was too surprising. Iris van Herpen, the woman responsible for this parade of beautiful extraterrestrials at her fall 2015 Paris runway show, is known for her disinterest in all things worldly. The 30-year-old’s designs, which look like everything from insect exoskeletons to dismembered accordions to 15th-century samurai armor (and which are beloved by precisely the eccentrics one would expect: Björk, Tilda Swinton, Lady Gaga, Daphne Guinness), utilize technology to an extent seldom seen outside of a laboratory. Van Herpen pays frequent visits to the European Organization for Nuclear Research, collaborates regularly with architects and sources materials from military-contracted manufacturing companies. She’s currently experimenting with synthetic silks that are so light a wearer can’t feel them, and has plans to work with a host of other futuristic materials as well: bio-fabricated leather grown from cow cells; shape-shifting textiles whose transformation is triggered by elements such as heat and water; light-refracting, mirror-embedded fabric that renders the wearer invisible.

When we meet in her Amsterdam studio one afternoon in late February, I ask van Herpen, whose mild accent and owlish eyes give her an ethereal affect, whether all those serious scientists and tech types ever roll their eyes at a fashion designer’s curiosity. “I think that if I would make very commercial clothes, I would get that feedback,” she replies. “The funny thing is that I often meet people who say, ‘I’m not interested in fashion normally, but it’s interesting what you do.’ I think that they realize how much work there is in fashion and that there can be an element of the art in it.”

For people who care about clothes (or anything other than email optimization and fitness tracking), the recent, dual-industry obsession with “wearable technology” can seem silly, if not downright sinister. So far the fetish seems to have been focused on accessories — Google Glass, the Apple Watch — that function more like slip-on life-hacking tools than genuinely useful, attractive items a person with even a rudimentary sense of aesthetics might be inclined to wear.

Van Herpen, meanwhile, rejects the notion that the cross-pollination of fashion and technology must yield utilitarian results. In 2010, for instance, she debuted a collection (the first ever) that made use of 3D printing. The clothes looked like alien prom dresses haloed by suspended splashes of fake water. “I have always had the fascination to work with materials that I cannot control, like water or air or energy,” she tells me in her lilting English, sounding like Glinda the Good Witch after two semesters of art school. “For me, technology is not an inspiration and it’s not a goal, it’s just a tool,” she continues. Van Herpen believes there is a lot of potential in wearable technology, but, she says, “It’s not fashion yet.” Rather than create futuristic multitasking garments (jackets that make phone calls! socks that can tell the time!), van Herpen has chosen to focus on developing innovative fabric. “I think the biggest potential is in materials. I really think materials can revolutionize fashion in the future,” she says. “Personally, I’m not interested in having a lot of technology on my body, so it will have to be embedded very cleverly.” 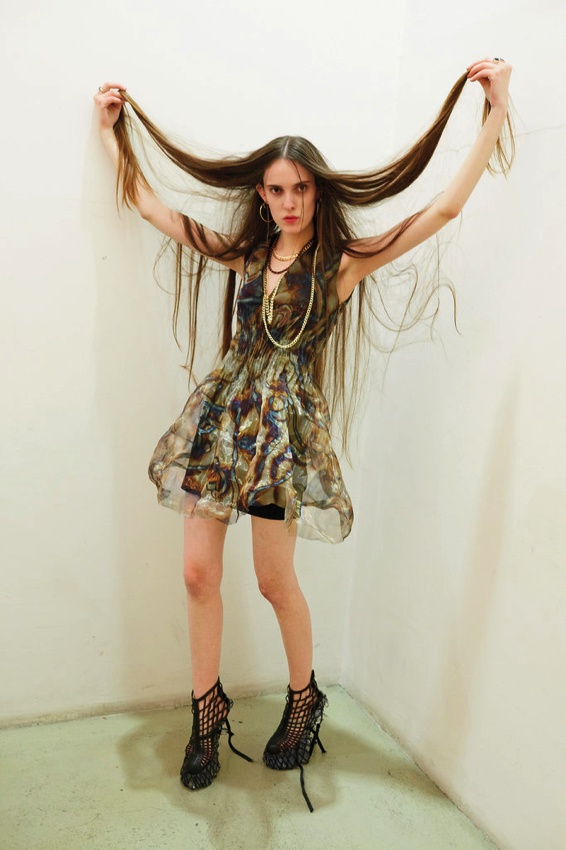