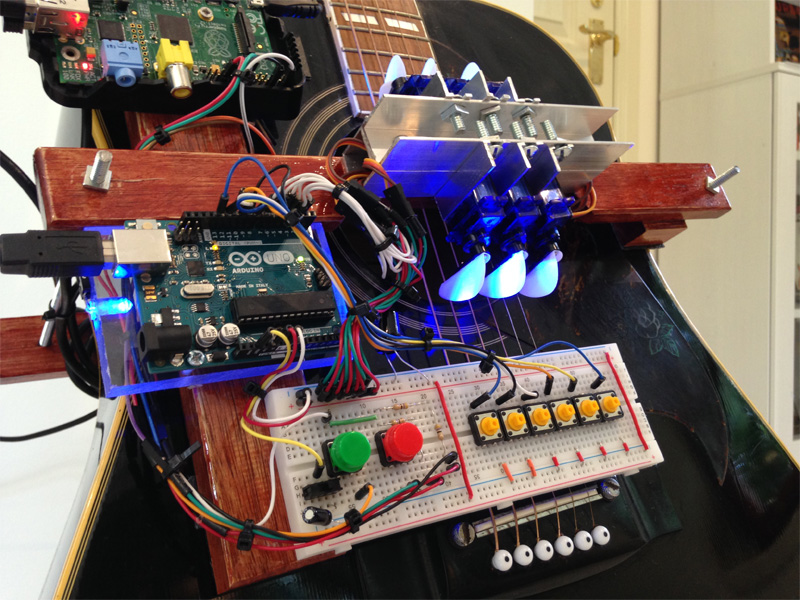 Why robot guitar? some back story
In one of those moments when something, some image or concept can completely capture one’s imagination, as I idly wandered through the Japanese pavilion at World Expo 1988 in my hometown of Brisbane Australia, I saw a robot playing a classical guitar. And I was awestruck. In fact I still am. I mean, how clever are humans to create a system that plays with such high fidelity, and be perfect in doing so every single time? How?

…Many years and much existential ponderings passed in this way, at the same time systems such as the Arduino and Raspberry Pi became prevalent, and electronics became more accessible than ever before. As a hobby, I began rediscovering my basic electronics knowledge, and as my confidence grew I realised that all this stuff was exactly what I needed to build that robot guitar I’d promised myself at Expo88. The elements were now coming together, as I’d always been more than a little hooked on the notion of bringing previously unseen and esoteric data sources into the real world in new and interesting ways. Then in 2014 I went to my first SIGGRAPH conference in Vancouver and was subsequently blown away by the creativity I found, I saw there that people were doing some very cool things and just…putting themselves out there. Just like that! I wish I’d found that conference years earlier.

Now, 27 years on from Expo88, all the ingredients are in place for the world’s first “Network Time Protocol accurate, Internet of Things connected, Big Ben chiming grandfather clock, firewall log playing, door chiming, guitar playing robot” thingy, all built by me!. Many were the busy nights and more than a few weekends spent working on this on-again off-again project, hacking together elements of music, computing, engineering, hardware, circuitry, art, lighting, cyber security, time, and working with all sorts of materials. I had to bring it all together.

For those who find all this as interesting as I do, I’ll briefly describe the journey, from an account of early prototypes such as the Firewall Tambourine – which was a pivotal stage towards bridging that gap between realtime data and realworld.

Robot guitar – Buttons and LEDs from benreardon on Vimeo.