One of the great things about the Raspberry Pi is how everyone starts with the same piece of gear. Since the audio hardware is identical on every unit, it is trivial to load the drivers and play mp3 files.

This guide describes how to connect input buttons and play audio files using a Raspberry Pi running Raspbian. We make use of Adafruit’s Pi Cobbler and the Python module RPi.GPIO.

If you have not already used the Raspberry Pi as a input device this guide will show you how to wire the pull-down resistors, GPIO pins, and buttons. 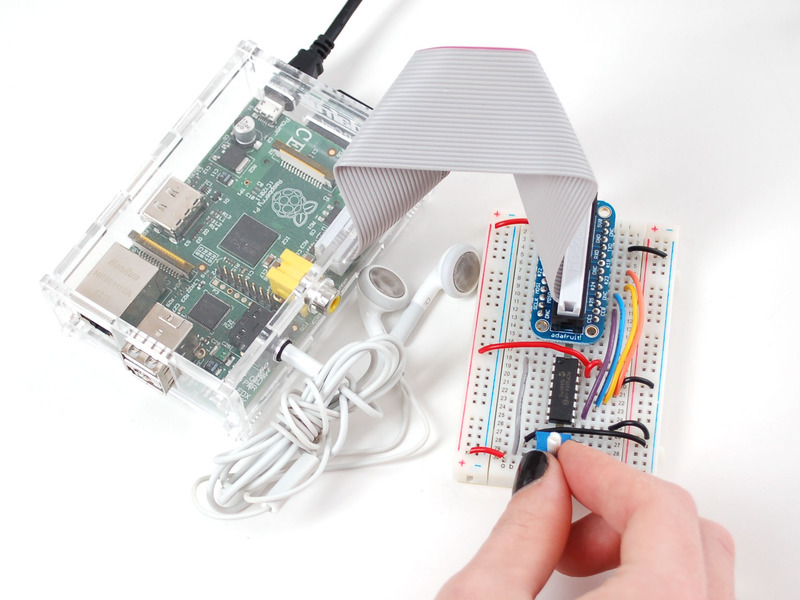 Teaching the Raspberry Pi how to read analog inputs is easier than you think! The Pi does not include a hardware analog-to-digital converter, but an external ADC (such as the MCP3008) can be used, along with some bit banged SPI code in Python to read external analog devices.

Here is a short list of some analog inputs that could be used with this setup:

This guide uses a potentiometer to control the volume of a mp3 file being played, but the code can be used as the basis for any kind of analog-input project.

Also added:  A few fixes to Drive a 16×2 LCD With the Raspberry Pi. (You might also want to check out Tony DiCola’s newer Character LCD With Raspberry Pi or BeagleBone Black guide on this one. It doesn’t cover setting up an init script, but the code is a bit more general purpose.)