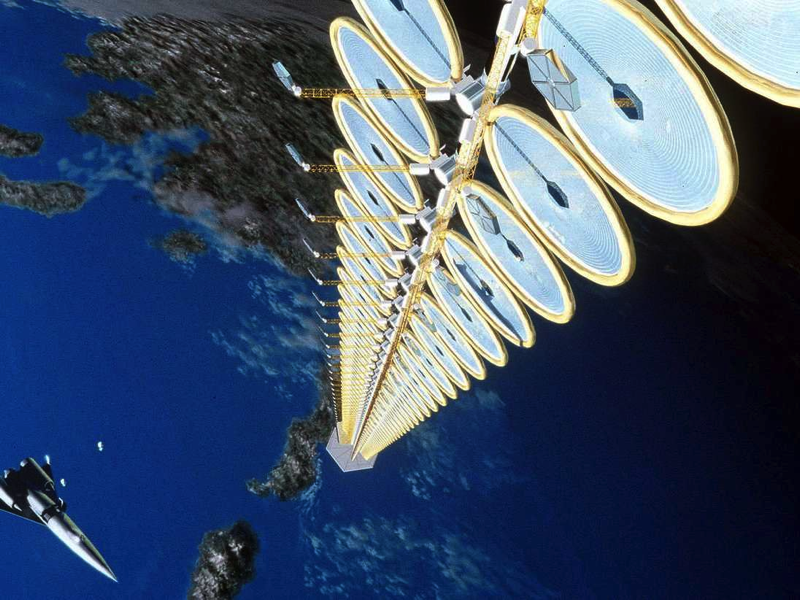 In an effort to use environmentally friendly solar power over coal based energy, China plans to install a solar power space station to collect the sun’s energy for earth. via business insider

In 1941, science fiction maven Isaac Asimov wrote a short story entitled “Reason.” The plot revolves around protagonists Powell and Donovan, who live on a space station that collects energy from the Sun and transmits it down to Earth using microwave beams. As with most Asimov tales, the story addresses ethics in a world shared between humans and sentient robots.

But one key aspect of Asimov’s tale may soon become a reality—the space solar power station, which supplies energy to the planet and becomes a key driver in the story when a solar storm seems to threaten the safety of Earth.

In an effort to mitigate pollution in its coal-based economy, China plans to install a solar power station 22,000 miles off the ground in orbit with other geostationary satellites. The plan calls for over six square kilometers of solar panels, nearly twice the size of Central Park and large enough to look like a star in the sky. If realized, the solar station will surpass the scale of the Apollo project and the International Space Station, assuming the title of largest-ever space project to date.

Though the project may seem random and farfetched, both the U.S. and Japan have also been working on similar energy collecting systems that could beam power back to Earth. The Japan Aerospace Exploration Agency (JAXA) has proposed its own solar collector, which they hope to launch within the next 25 years. China, however, is working on the fastest time scale, with Chinese scientists predicting that a collector could be launched as soon as 2020.

There are a number of advantages to the project. On a planet burdened by the negative health and environmental impacts of fossil fuels, clean energy is the way of the future. In China specifically, certain regions like Beijing suffer deeply from the adverse effects of air pollution caused by the proliferation of coal power plants. Furthermore, the space panels could avoid the terrestrial problem usually suffered by solar power plants, like energy access fluctuating between sunny days and dark nights or during periods of cloudy weather.
But there are a few major problems to overcome before the project can be realized. Such a massive construction would weigh over 10,000 tons, and the rockets that currently exist can only carry up to a 100-ton payload. Chinese scientists would either have to discover how to lighten the solar panels or make major breakthroughs in rocket technology. Likewise, maintaining and replacing broken panels would be incredibly expensive over time.
Despite its shortcomings, scientists are still optimistic about the prospects of an orbiting solar power station. And would not be the first time one of Asimov’s predictions has become a reality, so the project seems promising in that respect.