Your Next Belt May Control Your Display #WearableWednesday 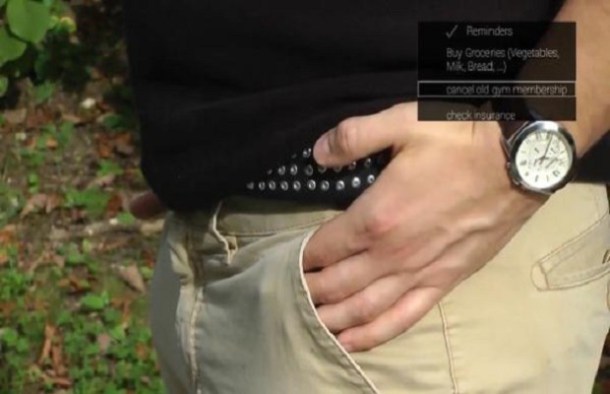 This belt may be the next device to control your head-worn display according to Bits & Pieces from the Embedded Design World. Researchers at Ulm University in Germany have created a touch sensitive belt that enables users to access shortcuts on their wearable. Fans of e-textiles can appreciate the use of metal studs on the belt for the touch magic, which are supported by popular prototyping parts including an Arduino Pro Mini, a Bluetooth Low Energy module and four capacitive touch sensor breakout boards.

Using certain gestures on different areas of the belt is an interesting idea, and seems to be part of a growing movement to develop interfaces that are more natural to everyday movements. It’s as if we are starting with the Greek language, and moving to signing. The researchers did some testing on the use of the belt and had some interesting results.

“In a qualitative user study with 14 participants, we found out that for short interactions (two-four seconds), most of the surface area is considered as appropriate input space, while for longer interactions (up to 10 seconds), the front areas above the trouser pockets are preferred.”

You might argue about whether you find Google Glass or other wearable displays convenient, but the idea of having an unobtrusive input is certainly a benefit. Think of the meetings you’ve attended where voice commands or large gestures would have been inappropriate. Devices like smartwatches are getting closer to solving the interface issue, but wouldn’t it be exciting to have a wearable that reflects your own natural movements. Are you a tapper? Do you like to make swooshes? Understanding your own body can lead to some interesting choices with wearables, and in the end, wouldn’t you prefer a customized product? If you want to learn more about the Belt, check out the group’s research paper. If you want to start learning how to make your own touch sensitive wearable, check out our tutorial on Capacitive Touch Sensitive Breakouts. These boards make it easier to get started and allow for custom sense pads made with conductive fabric and other fun sewing notions. What will you control?

Comments Off on Your Next Belt May Control Your Display #WearableWednesday