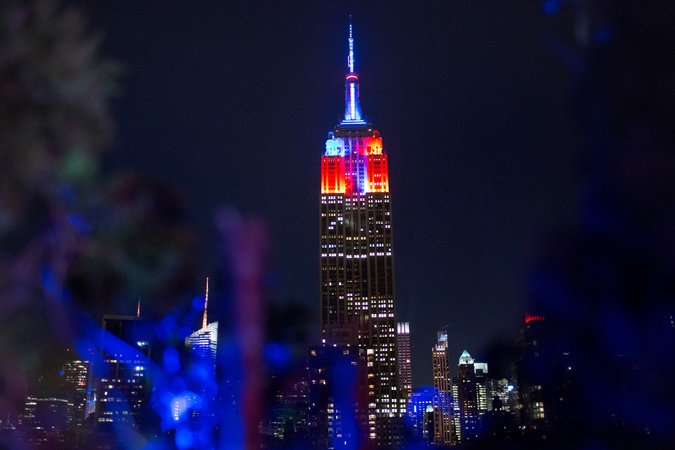 For all those in NYC tomorrow night – make sure to look for the Empire State Building! Via The New York Times.

“King Kong” was so 20th century. All that climbing and heavy breathing — so low-tech. This is the 21st century. Marc Brickman can have his way with the Empire State Building from wherever he happens to be, which, on Friday, will probably be his usual hangout, somewhere in a hotel with an unobstructed view.

Mr. Brickman, a lighting designer, has worked with Pink Floyd, Bruce Springsteen and the Blue Man Group, and has created light shows for the Summer Olympics in 1992 and the Winter Olympics in 1998. On Friday, to take note of the Whitney Museum of American Art’s move downtown, he will conjure representations of a dozen works of art onto the sides of the Empire State Building.

More about the idea behind those representations later.

The paintings are not Mr. Brickman’s, although he does paint as a hobby, he said. The paintings are from the Whitney collection. “We’re dealing with Andy Warhol and Elizabeth Murray and Rothko,” he said. “Giants.”

Of course, the Empire State Building is a giant in its own right, and Mr. Brickman’s representations will be displayed with its almost infinitely morphable light system, on the giant space starting at the 72nd floor and climbing 31 stories, as well as 200-plus feet on the antenna structure that gives the building its full 1,454-foot height. “It’s like the biggest gallery in the world,” said Donna De Salvo, the chief curator and deputy director for programs at the Whitney Museum.

Translating — or transforming — paintings like this is a first for the Empire State Building. It lights up in color nearly every night, recognizing everything from sports teams to charities to college commencements. Ms. De Salvo said the light show for the Whitney’s move “could have been the simplest of the red, white and blue.” That would have recognized the “American” in the Whitney’s full name, she said, stretching out the word “American” for emphasis.

But the planners at the Empire State Building “really got into it,” Ms. De Salvo said. “They started to think about works in our collection.”

They could consider such possibilities because in 2012 the Empire State Building installed an LED lighting system that could generate 16 million colors. It was a far cry from the outdoor lights — four beacons — that were installed by 1956, 25 years after the building opened. They were replaced by more powerful floodlights in 1964, just in time for the World’s Fair, and by colored lights in 1976, just in time for the nation’s bicentennial. For years, the colors were changed by maintenance workers who put colored plastic lenses on more than 200 bulbs.

The new system can be programmed to change colors by itself, no plastic lenses necessary. But conveying paintings on that scale? A painting is paint on canvas. This is light on limestone.

“This is not meant to be a reproduction; it’s meant to be representational,” said Anthony E. Malkin, the chairman and chief executive of Empire State Realty Trust, which owns and operates the building. “This is performance art.”

“It’s using the color palette” of the paintings, Mr. Malkin said. “It’s trying to convey the sense of what the artists presented.”