Into the Woods Prince Charming Costume 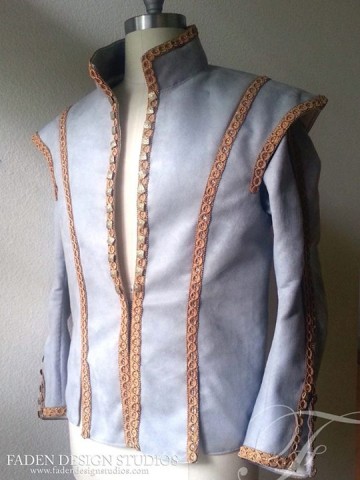 Disney brought Into the Woods from theater stages to the silver screen with a sweeping adaptation last year. Costume designer Colleen Atwood did tremendous work on the film; she gave each character a look distinct from what we’ve seen on stage, created costumes that complemented the dark and moody woods and added to the story. One of the most striking costumes belonged to Prince Charming (played by Chris Pine in the film). His light blue shirt and jacket stood out among the more earthy colors the other characters wore, and he stood out in contrast to the greens and browns of the woods. It suited his character.

Replica Props Forum (RPF) user joshspiderman23 start working on a replica of Prince Charming’s costume this spring. He’s made some parts and also teamed up with outside vendors to complete the costume. The doublet and shirt (pictured above and below) are from Faden Design Studios, and he purchased boots from Studio Boheme. Since the Prince’s shirt and jacket are a light blue, they look gray in places so Josh decided on a light gray suede that had blue tint.

He made the belt himself:

Now the belt I pulled some screen shots from the movie but I haven’t been able to discern what the actual pattern is, my best guess is some some sort of filigree/vine pattern tooled into the belt.

I’ve done a few belts in the past my most current work was on OUAT [Once Upon a Time] Hook’s belt but that had no tooling at all and I’ve never done it before so it was off to Tandy to load up on supplies and take a crack at it. I looked up some filigree patterns online that I could trace out but quickly realized that I did not possess the skills to do it. I decided to do my own vine-like design pattern keeping in mind to allocate space for the square dot trim along the edges. My first try at my own pattern yielded meh like results so I cut it off the 2.5 inch belt and decided to mock it up, dyeing and painting it to get at least an idea of how it would pan out.

I went back to Tandy and picked up some more tools and proceeded to recreate my v2 pattern 14 times on the belt. 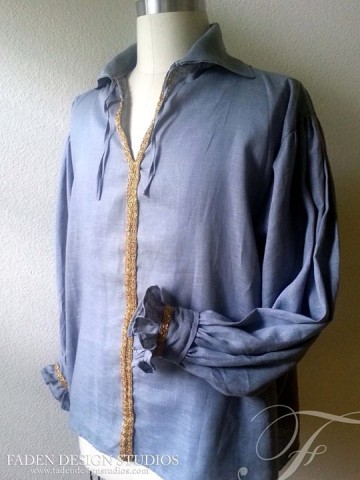 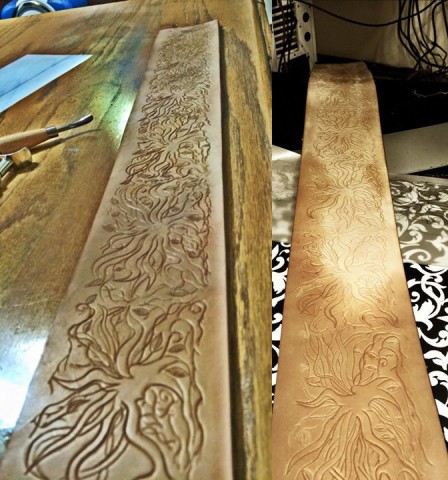 More on the Prince Charming costume at The RPF.

Filed under: cosplay, costuming —
Tags: into the woods, prince charming — by Amy Ratcliffe

Comments Off on Into the Woods Prince Charming Costume