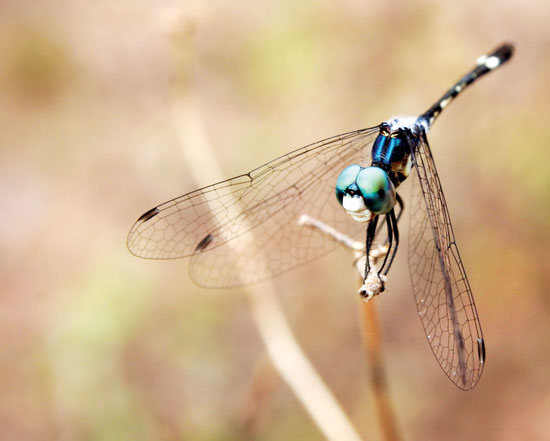 Researchers have developed a bacteria-resistant silicone coating inspired by dragonfly wings. via utne.com

Proving once again that some of the best technologies are those derived from nature, researchers have developed a bacteria-fighting silicone surface inspired by the wings of the dragonfly. As Beth Mole reports in Science News (Dec. 28, 2013), the research, which was first published in Nature Communications, says that the bacteria-resistant surface can be incorporated into the coatings of medical instruments and food-processing equipment, greatly reducing the risks of infection.

Using a scanning electron microscope, researchers found that the spiky surface of dragonfly wings can literally pop bacteria cells on contact. Researchers then used inexpensive and easy-to-manipulate black silicone to create microscopic spikes just 500 nanometers tall and 20-30 nanometers thick that are as effective as the spikes on dragonfly wings at killing bacteria. Remarkably, the process of creating the bacteria-thwarting silicone surface takes only five minutes. “(It) seems pretty straightforward and versatile,” said nanochemist Thomas Webster of Northeastern University in Boston. “There’s a lot of promise for nanoscale features to reduce bacterial growth without antibiotics.

Comments Off on Fighting Bacteria With #Biomimicry