Sessilanoid: A Sum of all Parts – Interactive Sculpture from James Peterson on Vimeo.

The Sessilanoid doesn’t, at first, seem to have a lot in common with an undersea life form that hangs on to boat bottoms and is widely considered a pest. But barnacles are, in fact, the inspiration for this wall-sized piece of interactive art.

James Peterson, a Los Angeles-based artist is interested in the relationship between man-made and natural materials. He built the Sessilanoid like a seed, he says, that grows and propagates radially, eventually giving off light. It’s commentary on the effect of the plastic from which it’s made. “As the plastic works its way through the ecosystem, and affects other life forms, sometimes completely decimating them, what might it look like if that plastic started to take on the form or representation of the life that it’s killing off?” he says.

Powering the piece is a Nicolaudie lighting controller, which uses MIDI pins switches to rotate between subroutines for the RGB LED strip. Peterson used CNC milling to shape the high-density foam pieces, and made molds and vacuum formed polystyrene. The design was done in Rhino.

Viewers of the Sessilanoid can change the color and pattern of its lights via touch. It is built in pieces, so the size of the work varies, but at its largest, it extends 40 feet wide by 15 feet tall. 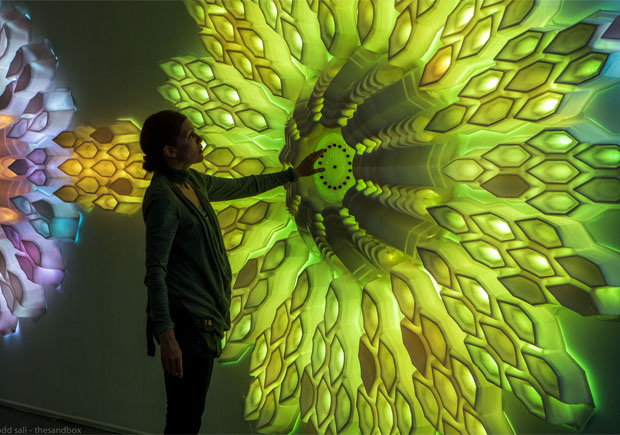