The Road to Authoring a Crowd-Funded Project 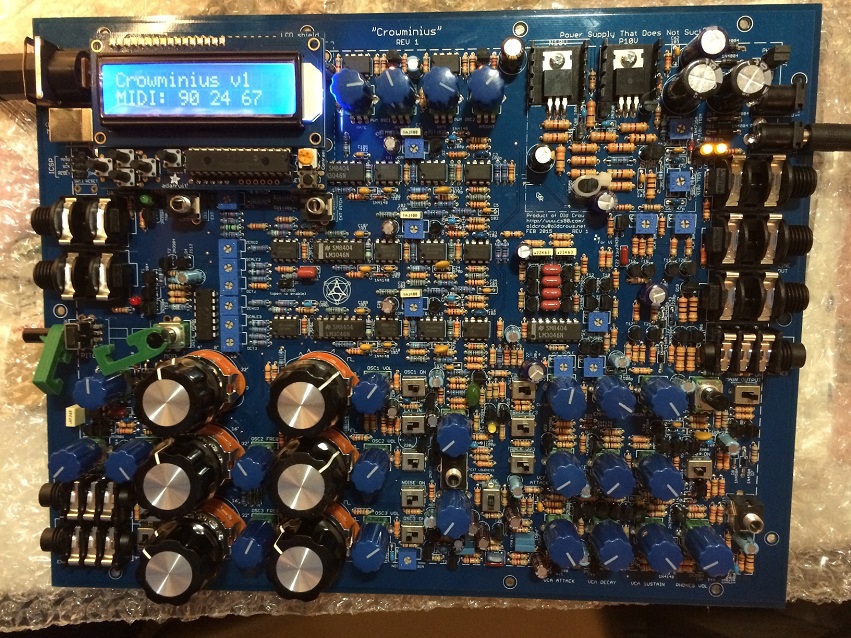 Hey folks, Crow here.  I am preparing materials to embark on my first-ever Kickstarter as an author for my Crowminius project.  I’ve dealt with the crowd-funding site in the past as a backer (everything got delivered), but as a hardware manufacturer I tend to note trouble signs from a number of projects.  I am no authority on the difficulties of managing a crowd-funded project–not yet, anyway–but a few years ago I wrote about some of the emerging problems I noticed.  I am going to try and avoid the majority of those with proper preparation, but I will relate what I observed then.  Feel free to debate any of my points:

So you have a product idea you want to fund through the popular crowd-sourced funding site http://www.kickstarter.com/ ?

Well, a few notes of caution are in order:

If you are a studio artist trying to create an artistic statement, be it in music, sculpture, painting, etc., your path is the easier one among the project hopefuls. Once the art is made, you can oversee its copying/distribution, or in the case of a single work, it’s gallery unveiling with relatively little overhead.  however, look into using a curator or music service beforehand, not on the presentation date.

If you are a band trying to fund a tour, make sure the money is spent toward hiring a good tour management service. One that can rent transportation, schedule venues, and so on. The logistics proficiency of a touring group will make or break you. The music is easy part.

If you are a software author writing an app or game, hire a good PR firm.

And now, the one I can solidly speak about, since it involves something I know a great deal about: piecewise hardware manufacturing and delivery. This refers to any project that has a tangible product as its goal. Anything like shoes, a fish tank, an iPad stand, an e-paper wristwatch…anything that requires a real factory to effectively produce.

Do not simply present an idea for manufacture.  Have fully-functioning prototypes ready ahead of time.  Have at least an agreement in place for sourcing production, whether it be a local factory, a garage factory, or overseas manufacturing.  Have a shipping system in place: set up a UPS/Fedex account and use their logistics services.

Be ready to have trouble with the product every step of the way.  Lead-times on parts, design flaws that should have been ironed out in the prototypes you were supposed to make.  Connector reliability issues.  Factory equipment failures or certification issues.  OSHA coming after you for unsafe industrial practices.

Spend your funding judiciously.  If you end up overfunded, it is easy to think of the money as disposable income.  You will end up needing all of it for the project.  Cost overruns, having to obtain parts through brokers, license fees, taxes, attorney fees and so on.

Eventually the novelty will wear off.  Be prepared for that.  I am sure it is fun handcrafting item no. 1.  Item no. 100?  Not so fun.  Nothing kills enthusiasm for a project faster than realizing it is really work and not play. Since it is work, and you factored the costs of outsourcing into the project (right…right?) take it to a turnkey factory facility.  There are some good ones in the US.  There are some cheaper ones (not necessarily good) overseas.

This recent overfunding craze is a problem.  There is a chance it will become a staple of kickstarter’s identity, and once it does, they won’t readily want to give it up.  I refer to projects that end up overfunded by something like 7000%.  Kickstarter has no tracking of funding from the backer to the project.  What if problems arise and the project is never completed?  I found this tidbit (from the wikipedia entry on kickstarter) rather telling.  “As of April 2012, Kickstarter had more than $175 million dollars pledged and more than 20,000 successfully funded projects. The project success rate was 44%.”    Forty-four percent.

I cannot speak to the fitness of these people to make their products, but one thing is clear to me: they all created a monster and they don’t know how to make it go away.  This is only going to get worse before it gets better.

This is why the first question I ask people who come to me for manufacturing advice is this: “Are you sure you want to make this?  Because manufacturing is actually pretty hard.”

In a later article I then added:

It occurs to me that the online shopping mentality of the consumer is what is creeping into the way folks back Kickstarter projects. The issue, though, is that a majority of the backers don’t really see themselves as investors, or even donors. They see themselves as consumers pre-ordering trendy products. Kickstarter is being approached as a kind of Amazon showroom for new products that one can feel smug about obtaining before the other guy. And that is the problem.  It is not a retail pre-ordering site.  It is a funding portal for drumming up money for projects that may or may not actually make it to market.

This is all going to come to a very ugly head eventually, when more and more  backer-consumers feel jilted because their “pre-ordered” merchandise fails to materialize, and that their already forked-over money is never going to be seen again.  Already I see infighting between backers, who, since they cannot actually get in touch with the project people, argue among themselves: it is like arguing over who gets to hold the empty bag.  Which is silly.

Anyway, back to the present. For my own part, being an actual hardware manufacturer, I intend to take certain steps as a matter of course:

The Crowminius project is going to be very conservatively estimated.  Using my “3x parts cost” rationale I obtain a $600.00 price per unit.  If the product was already ramped-up into production, this price point would be fine. The issue here is, this is the initial production batch.  The initial batch of a given product is nearly always 1) 50% more expensive to make and 2) fraught with problems every step of the way.  The best way to prepare for start-up costs is to take the “steady-state” price, in this case $600, and add 50%.  This results in $900 which I am raising to $1000 to retain even more headroom.  Thus I have a goal to produce 100 initial units at a cost basis of $1000.00 each for an initial Kickstarter project funding goal of $100,000.  The backer incentives might include a $1000 option, but realistically I want to sell them at the $600 target.  So while I plan to offer a $600 pledge tier in addition to a $1000 pledge tier, plus some lower tiers for things like logo stickers, etc. the general idea is to be able to sell through the backing of a minimum of 100 units with sufficient overhead funding.

If my project ends up overfunded (provided it succeeds in funding at all!) then the focus is still on the initial batch and timeline, with extra runs of product to receive their own manufacturing schedules as a later date.  This is one pitfall a number of project managers tend to fall into–not understanding the concept of a lead time/manufacturing window.  You can’t reasonably expect to “just make” more units in the same timeframe.  I would get calls all the time from one customer who expected “just-in-time” services, that is, short-scheduled manufacturing that is still planned months in advance as as to be able to deliver product shortly after manufacture. They utterly could not understand that it takes the same amount of time to make 1,000pcs of product as it does 10,000pcs.  The details are in the lead-times.  If I cannot get 10,000 parts I cannot get 1,000 parts either.

My introductory video is about halfway done.  When it is ready it will be 70% about manufacturing capability and 30% about the actual Crowminius project.  I feel it important to stress the capability to produce something over the actual project because demonstrating my fitness to manufacture is more important to me than any specific thing I make.  I’ve studied a number of intro videos, and have concluded that the best ones cover their material at a pace so as to not bore the viewer and lose their interest (or backing) and leave you with a sense of confidence in their ability to get the job done.  In any case, it is going to be an interesting ride.