New Guide: Building and Running MicroPython on the ESP8266! 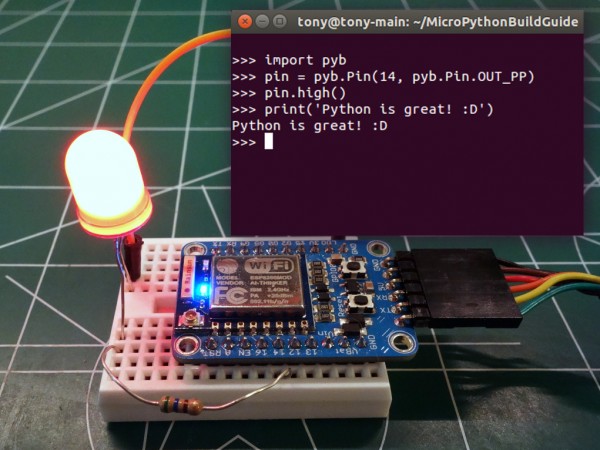 Building and Running MicroPython on the ESP8266 is a new guide on the learning system.  Check it out:

MicroPython is an awesome little Python interpretor that can run on embedded platforms.  Using the familiar Python programming language you can talk to hardware and control it, much like controlling hardware with an Arduino or other embedded board.  The MicroPython board makes it easy to get started using MicroPython, but did you know you can use MicroPython on other platforms like the nifty ESP8266 WiFi module?  Thanks to recent contributions to MicroPython you can turn an ESP8266 into a MicroPython device, and this guide will show you how to get started by compiling and installing MicroPython firmware for the ESP8266!

Before you get started one thing to note is that MicroPython’s support for the ESP8266 is still in very early stages of developmentand not all MicroPython board functionality is available.  Currently you can access GPIO pins, connect to a WiFi network, and talk to the internet using a low-level socket-like interface with MicroPython on the ESP8266.  Access to I2C, SPI, or other parts of hardware are not yet supported–consider MicroPython on the ESP8266 just for advanced users right now!

However if you’re interested in hacking on and even contributing to MicroPython for the ESP8266 this guide will show you how to setup a toolchain for building the MicroPython ESP8266 firmware.  You can even use the toolchain built from this guide to create other ESP8266 projects!

Building and Running MicroPython on the ESP8266

Comments Off on New Guide: Building and Running MicroPython on the ESP8266!