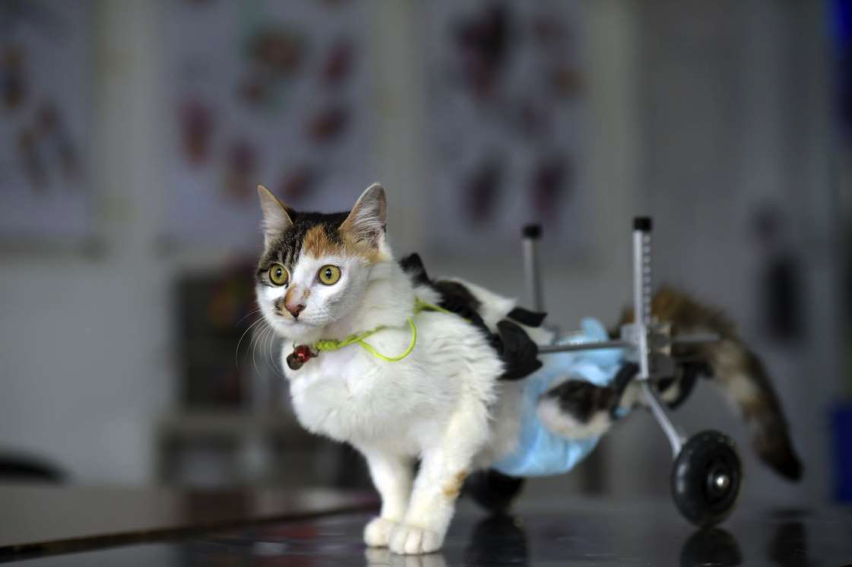 These animals were given another chance at life with the help of technology. via msn

Eight-month-old Hei Hudie fell from the ninth floor of a building; the cat survived, but her hind legs were crippled. Four surgeries in five months at a pet hospital in China’s southwest Chongqing municipality and being fitted with a special walking aid later, Hei Hudie is on the prowl once more using a wheeled brace—thanks to some Good Samaritans. Click through to read about other animals who have got a second chance at life after being fitted with prosthetic devices. 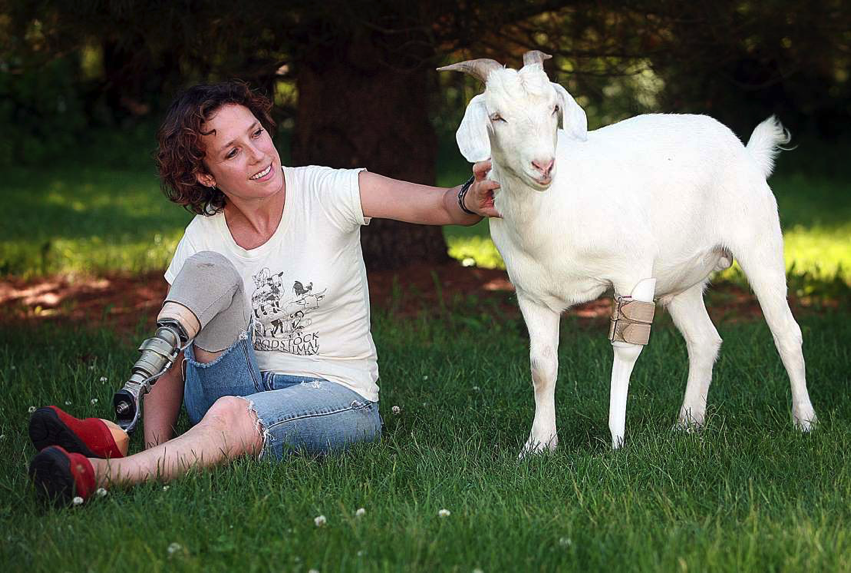 Albie, a goat, was brought to Jenny Brown, founder of the Woodstock Farm Animal Sanctuary in New York City, after he had escaped an abattoir with a badly infected leg. The leg had to be amputated when several efforts to heal it failed. Brown, who has worn a prosthetic leg ever since she was 10 years old, had Albie fitted with a prosthetic leg by the same doctor who made hers. 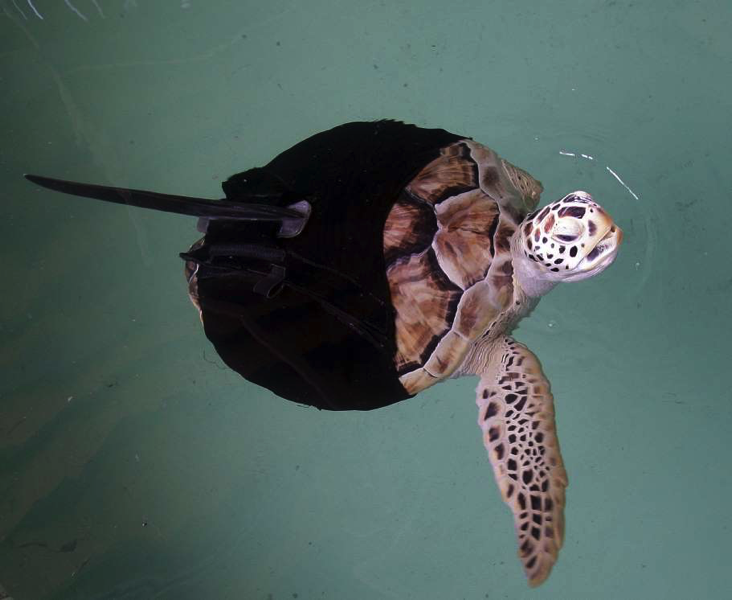 When Allison, a green sea turtle, was rescued, she had only one flipper, so could only swim in circles. A specially-designed neoprene suit with a carbon-fiber attachment allowed Allison to join other turtles at the Sea Turtle, Inc. in South Padre Island, Texas, United States, in gliding through the rescue facility water reservoirs. 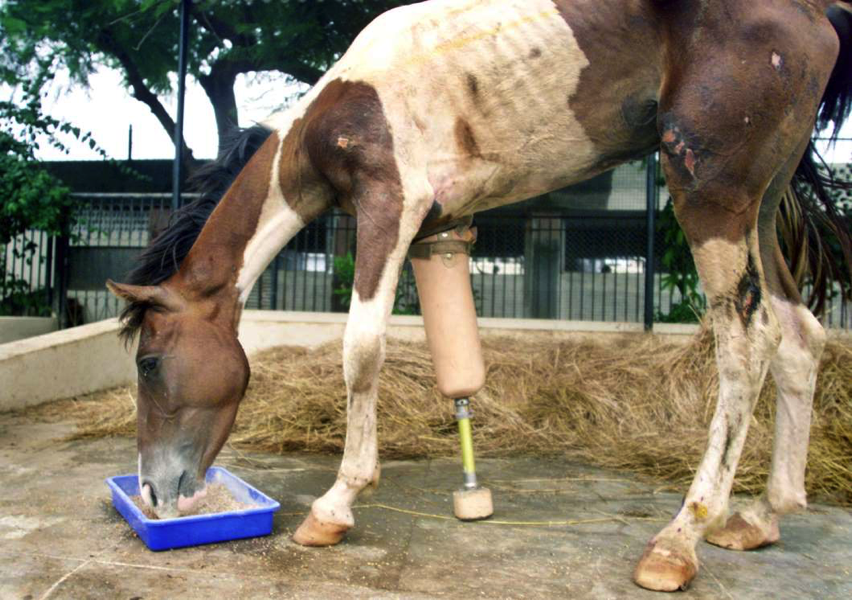 A horse nicknamed Macho, fitted with an artificial leg, enjoys a meal in Mumbai, Maharashtra, India. Vets amputated the horse’s front leg and gave him a plaster of Paris prosthetic after an animal welfare group found him on a highway, bleeding from a leg wound. 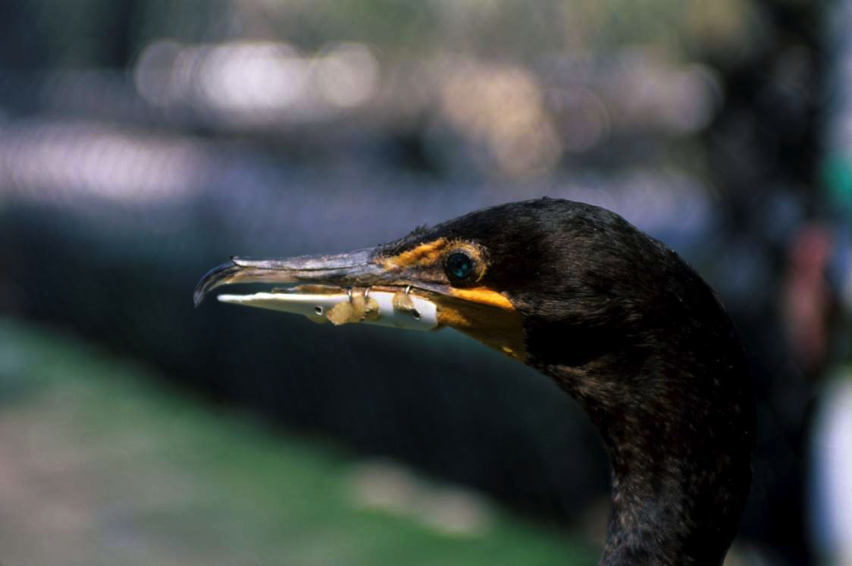 A cormorant is seen with a prosthetic beak at the Florida Keys Wild Bird Rehabilitation Center at Tavernier in Florida, United States. 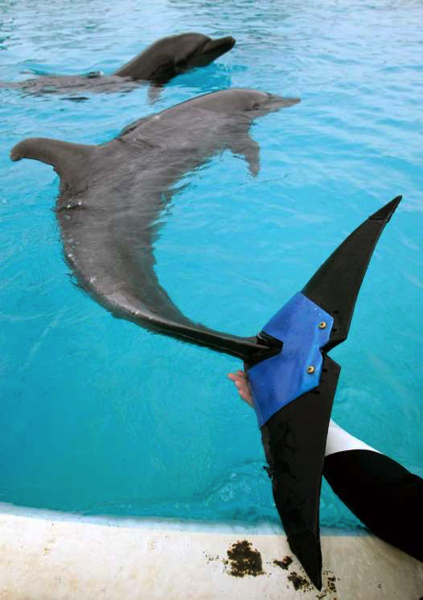 Fuji, a bottlenose dolphin, lost 75 percent of her tail fin due to an unknown disease. The dolphin was fitted with a prosthetic fin developed by veterinarians and the Bridgestone tire company. Fuji, a resident of Okinawa Churaumi Aquarium in Motobu, a town on the southern Japanese island of Okinawa, can now swim and jump using the artificial tail fin, which is believed to be the world’s first artificial fin for a dolphin. 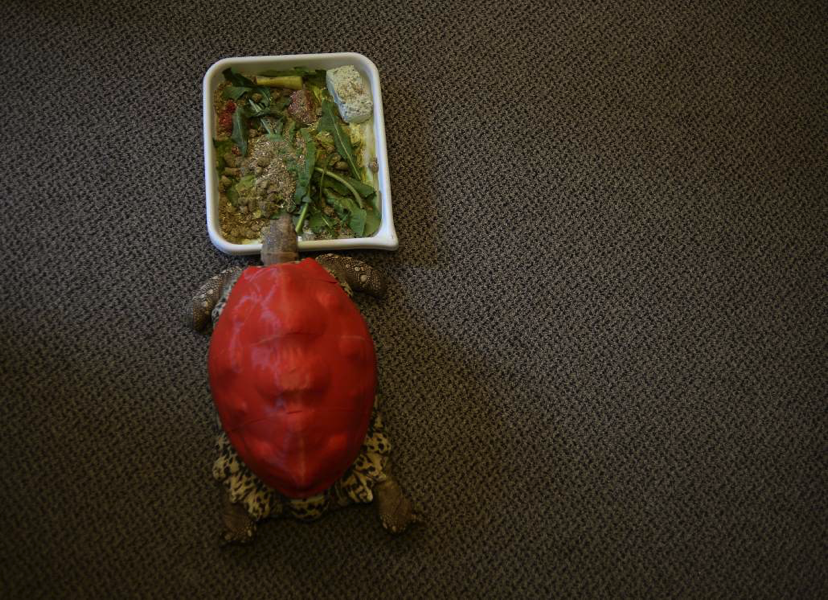 Cleopatra, a leopard tortoise, whose shell is deformed because of malnutrition, wears a new prototype 3D-printed prosthetic shell. Cleopatra, who now lives at Canyon Critters Reptile Rescue in Golden, Colorado, United States, got the prosthetic shell after a student of the Colorado Technical University worked to design it for her.

Comments Off on Bionic Pets: Animals Saved By Technology