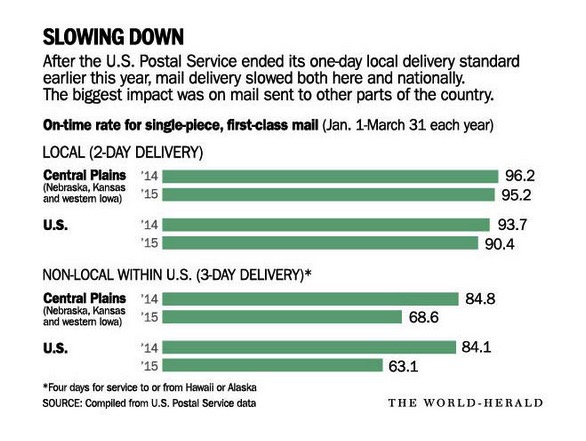 U.S. Postal Service delivery times lag more than expected – Omaha.com: OMAHA METRO. We’ve been covering this trend for awhile, the postal service is slowing down, things are getting later, this means the low-cost services from FedEx and UPS that use postal (SurePost and SmartPost are also very very slow). This is why one of the many reasons we’re continuing to use reliable and trackable UPS shipping for most/all orders.

…only 63 percent of such non-local mail arrives on time. For letters sent from or to some of the nation’s largest cities, including New York and Los Angeles, fewer than half meet the three-day standard.

The biggest delays have been with single-piece first-class letters, cards and small parcels that are bound for non-local destinations within the continental United States. A year ago, more than four out of five such mail pieces were meeting the Postal Service’s three-day delivery standard. Today, it’s closer to three out of five.

..officials with the postal union put the blame squarely on the recent cost-cutting moves.

“That’s not the carrier; it’s the postal system,” said Phil Thomas, president of the postal workers union in Omaha. “We need the public to join us to protect their service. The fact is, they are now getting less for more.”

Non-local letters sent from the heart of New York City, for example, reached their destination within three days only 44 percent of the time. That’s an eye-popping 37 percentage points worse than last year.

It’s not just big cities that have slow mail service. The region that includes Colorado and Wyoming, for example, has 56 percent on-time performance for those three-day letters.

Read more and chart below. 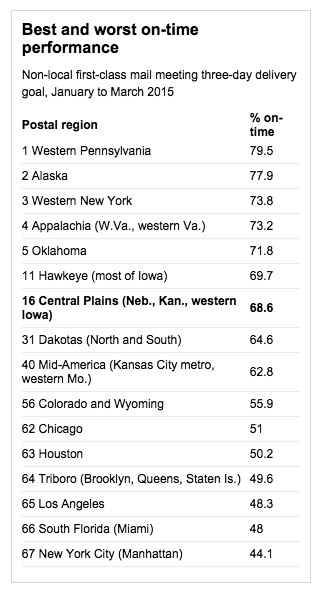