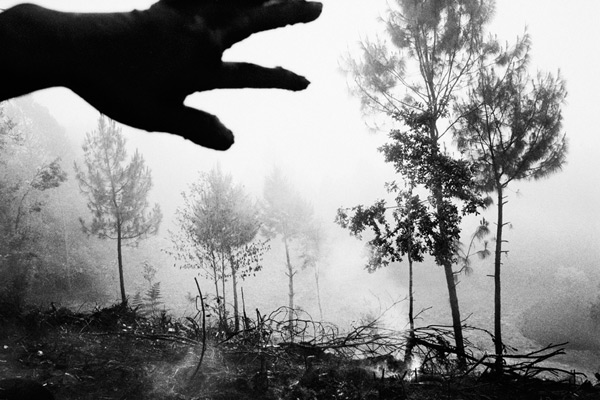 Jacob is a member of Magnum Photos. Yossi Milo Gallery in New York, Rita Castelotte Gallery in Madrid and RTR Gallery in Paris also represent him.

Jacob was born in Denmark, in 1976 and grew up in Brndby Strand in the suburbs south of Copenhagen. He lived as an exchange student in Strathroy, Canada from 1994-95 and as a hunter and fisherman in Tiniteqilaaq, Greenland from 2000-2002. In Spring 2006 he moved to Tokyo, staying there 18 months before returning to Denmark in August 2008. He now lives and works in Copenhagen.

After studying at the European Film College, Jacob was admitted to Fatamorgana, the Danish School of Documentary and Art Photography in 1998. There he developed a unique, expressive style of black-and-white photography, which he has since refined and further developed.

In the autumn of 1999 he went to live in the settlement Tiniteqilaaq on the East Coast of Greenland. Over the next three years he lived mainly in this township with his Greenlandic girlfriend Sabine and her family, living the life of a fisherman and hunter but also photographing. The resultant book Sabine was published in 2004 and the work was nominated for the 2005 Deutsche Brse Photography Prize.

In the summer of 2005 Jacob traveled with a film crew to Guatemala to make a documentary about a young Mayan girls first journey to the ocean. The following year he returned by himself to the mountains of Guatemala where he met the indigenous family Gomez-Brito. He stayed with them for a month to tell the story of their everyday life. The series won the First Prize Award, Daily Life Stories, World Press Photo 2006.

In 2006 he moved to Tokyo and during the next two years he created the images from his resent book I, Tokyo. The book was awarded the Leica European Publishers Award 2008 and published by Actes Sud (France), Apeiron (Greece), Dewi Lewis Publishing (Great Britain), Edition Braus (Germany), Lunwerg Editores (Spain), Peliti Associati (Italy) and Mets & Schilt (The Netherlands)

In 2008 Jacob started working in Bangkok and in 2009 in Copenhagen. Both projects will be published as books in 2013. Jacob is currently working on the project Arrivals and Departures – a journey from Moscow to Beijing – in co-operation with Leica Camera.

The Gomez Brito family lives in a remote area of the mountains in Guatemala near the village of Nebaj. Nebaj is part of the Ixil-triangle an area of three towns that maintains one of the strongest indigenous cultures in Guatemala. Even though the number of natives makes out the majority of the population in the country, they are still discriminated in many ways. Most of them live in poverty and many work on farms earning a wage of 2-3 dollars a day.

In the late 1970s and 1980s, the Ixil-region was engulfed in a civil war, killing and displacing thousands of Ixil Mayans. During the war the portrayed family lost their youngest child, who died of hunger and disease when hiding in the surrounding mountains. Today, in the very same mountains, the mother Juanita and the father Andrs live with their nine children. Unlike many other families from this area, they have succeeded in keeping the family together by working hard on their own pieces of land. From early morning to sunset the daily routine is to collect fruits and berries, cultivate the land – which mainly consist of corn and beans – and breed the animals.

Even though the chance of a change in their life is most unlikely, all the children have different dreams for the future. Maria, 7, wants to continue school and get an education, Faustino, 18, is eager to find a way to enter the USA, while David, 6, claims that his wish is to take over the familys land, when his father retires.