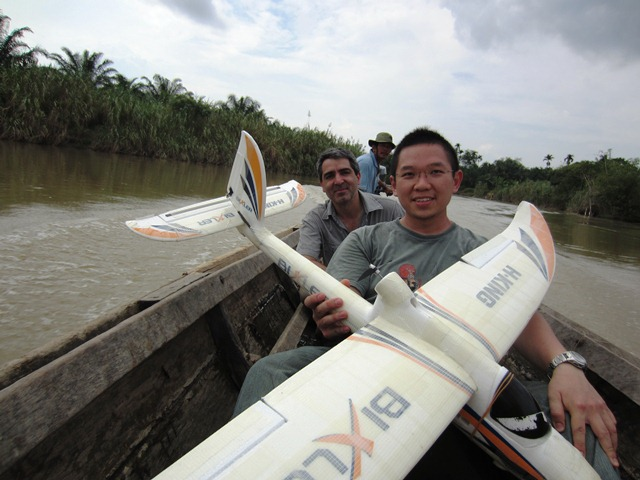 In January 2011, Lian Pin Koh and Serge Wich first met in Zurich to discuss the challenges of wildlife conservation in Southeast Asia. Lian Pin is a conservation ecologist, and Serge is a primate biologist. It was then when they conceived the idea of using unmanned aerial vehicles (UAV) for conservation-related applications.

Following further discussions and research, it became apparent that most commercially-available UAVs are too expensive for conservation groups in developing countries that need them the most. That motivated Lian Pin and Serge to try building their own low-cost UAVs.

Their prototype UAV cost less than $2,000. In February 2012, they brought that prototype to North Sumatra, Indonesia, for its first field test. During four days in the field, the UAV flew over 30 missions, and collected thousands of high quality aerial images and video footages of forests and wildlife. That probably was the first time that amateur UAVs were ever used for conservation research in tropical rainforests.

After Lian Pin and Serge returned to Europe, they posted a few of these video footages on Youtube. Mongabay.com ran a story about their trip, in which the term ‘conservation drones‘ was coined. They soon became overwhelmed with emails from colleagues and the press.

In April 2012, Lian Pin and Serge co-founded ConservationDrones.org to share their experiences of UAV building and applications with the public.

Since then, ConservationDrones.org has expanded to a worldwide initiative that seeks to build capacity in the developing tropics to use UAVs for conservation, and to raise public awareness of conservation challenges in those regions. It still upholds its original and overarching goal of inspiring others to adapt emerging technologies for conservation.

In August 2013, ConservationDrones.org formally became a nonprofit under the fiscal sponsorship of Mongabay Org Corp, a U.S.-based 501(c) established in 2011. Over time, we have expanded our team to include several new core members, including Simon Wunderlin, Brenden Duffy and Keeyen Pang.