Stand out amongst the other students with an LED graduation hat. via instructables

For all of those graduates or almost graduates who have either had or will have graduation soon, Congratulations!

My roommate just graduated from the Washington State University College of Apparel Merchandising Design and Textiles, with a degree in fashion merchandising. As most families of graduates find out, one of the struggles of graduation is finding their graduate in the huge crowd of graduates. This can also be part of the fun of graduation as you are allowed to decorate your hat.

Since I have access to lots of electronics I offered to put LEDs on her hat to make it extra flashy. I used WS2812 LED strips to create the LED high heel on her hat, and the LED Digilent logo on the hat I will use as an example in this Instructable.

As you can hopefully see in the super blurry phone picture I took, the LED hat definitely stood out.

In this instructable I will go through creating an led shape, camouflaging the strips and wires, programming the microcontroller to run the strips, and additional hardware needed for powering the board. 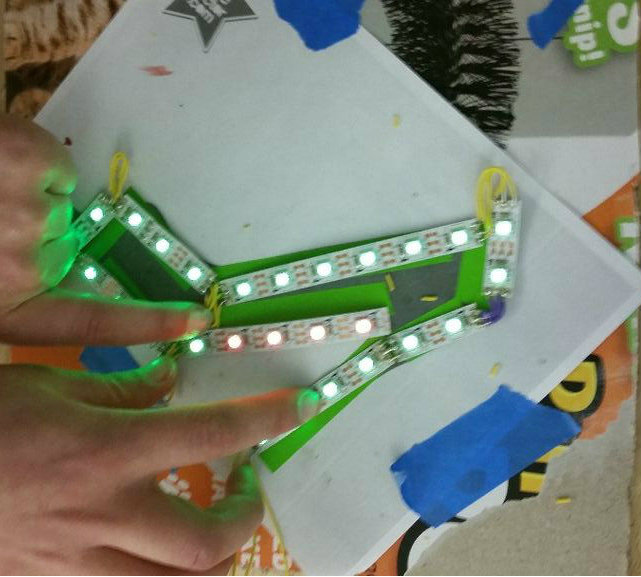 In this tutorial I will go through making the LED hat with WS2812 LED strips, and a chipKIT UC32 microcontroller.

Generally you can buy the strips in rolls, you shouldn’t need more than one roll but the amount that you need depends on the shape you choose to make.

The strips that are closest to what I used can be purchased here. The strips I used had the leds more spaced out, but if you want more space between the LEDs you can cut the strips and solder wires in between. The color doesn’t particularly matter as you will end up painting them.

You can purchase weatherproof strips from Digilentinc, but you won’t be able to have ideal curves.

– A microcontroller that can run the strips

I used the UC32 from Digilent in this tutorial. The main requirement for the microcontroller is that it has a fast enough clock speed.

I choose a 3.7 V 2500mAh Lipo flat battery. I chose this so it would be a long lasting battery and to minimize the weight since it will end up on a hat. The battery I bought can be purchased here, and lasted for almost 3, 8 hour days, which was a bit excessive.

I choose to put a small switch in my hat so that the wearer could easily turn the hat on or off. The switch that I found can be purchased here.

To connect components and create curves in the LED strips.

To solder the various components to wires.

And of course you need various crafting supplies to decorate the hat after the LEDs are affixed.

Comments Off on Make An LED Graduation Hat