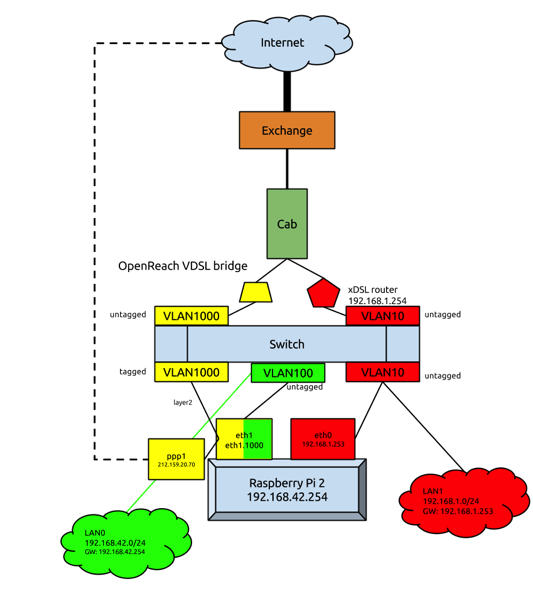 Multipath routing for Raspberry Pi2. Above is the physical layout. via whizzy

Two lines coming from the cabinet to my house, one with Plusnet and one with TalkTalk

The Plusnet line:
It came with an OpenReach vDSL bridge and a crappy locked down router, so I chucked the router away and used PPPoE tools to bring up the PPP connection
The vDSL bridge talks to the Raspberry Pi over a VLAN to keep it separated from the other noise on the switch
Interface eth1.1000 is an unnumbered interface and ppoeconf uses a layer 2 discovery protocol to find the bridge
Once the PPP connection is established ppp1 can be used to route traffic to the internet

The main LAN:
Interface eth1 is used to connect to the main LAN
Clients on the LAN use the Raspberry Pi as their default gateway

With me so far? Essentially we have the normal eth0 interface of the Pi connected to one LAN with its own router and eth1 (a USB gigabit ethernet adapter) has a tagged VLAN for connection to the OpenReach bridge (eth1.1000) and an untagged default network for connecting the the main LAN. Once the layer 2 connection with the bridge is established a PPP connection becomes the second route to the internet.

The death of route caching

Around version 3.6 of the Linux kernel “route caching” was removed. With route caching in place you could set up a default route with multiple hops, something along the lines of:

When a packet needed routing to the internet the kernel would do a round-robin selection of which route to use and then remember that route for a period of time. The upshot of this was, for example, that if you connected to www.bbc.co.uk and got routed first via 192.168.1.254 and so SNATed to 212.159.20.70 then all subsequent traffic for that destination also got routed via the same route and had the same source IP address. Without route caching the next packet to that same destination would (probably) use the other route, and in the case of my home user scenario would arrive from a different source IP address – my two internet connections having different IP addresses. Although HTTP is a connectionless protocol this change of IP address did seem to freak some services out. For protocols with connections the story is worse, e.g. packets of an SSH connection would arrive at the far from from two different IP addresses and probably get dropped. Route caching was a simple fix for this issue and worked well, as far as I was concerned anyway.

Im sure the reasons to remove it are valid, but for my simple use case it worked very well and the alternative, and now only option is to use connection marking to simulate the route caching. When I first looked at it I was baffled and thought I would just go back to a pre 3.6 kernel and use route caching again. But, in the standard Raspbian distro there isn’t a kernel old enough for the Raspberry Pi 2 to make use of it.

So I was stuck… I had to use a Raspberry Pi 2 to get enough packet throughput to max out my internet connections, and I couldn’t use route caching because there wasn’t a kernel old enough. This meant I was going to have to either compile my own kernel or learn to use connection marking. Joy.

The documentation for Netfilter is extensive but I found a lot of it to be out of date and very hard to grok. I found a few projects who had already implemented connection tracking/marking namely FWGuardian and Fault Tolerant Router.

FWGuardian is, as far as I can tell, designed for something orthogonal to my set up. Where you might have lots of connections coming in to a server, or a number of offices which need to connect to other offices via pre-defined routes. I played around with it for a while, and Humberto very kindly offered me support over email, but ultimately it was too involved and complex for my needs. You should check out the project though if you have advanced requirements. It’s got some brilliant features for a more enterprise oriented setup.

Fault Tolerant Router is a much simpler setup and matched my requirements very closely. At it’s core it’s a Ruby script which can write your iptables rules and routing tables and constantly monitor the links. If one goes down it can dynamically rewrite your rules and direct all traffic down the working connection. However, it’s not expecting to use a PPP connection where gateways can change and it’s not really been tested with VLANs, although in practice it handled VLANs just fine.

But, at the end of the day, I wanted to learn how to do this myself and so I used the rules generated by Fault Tolerant Router to understand how connection marking was supposed to work and then started to implement my own home-grown solution for teh lolz.

As I understand it, the idea with connection marking, or connection tracking – I’m not sure what the difference is, is that when a new conversation starts the packets are marked with an identifier. You can then set ip rules to dictate which route packets with a particular mark take. In essence once a new connection is established and a route selected, all other packets in that conversation take on the same mark and so the same route. This emulates the route caching of the past. I don’t really get how, in the case of an HTTP conversation (or flow) which is connectionless, all the packets in the conversation get marked the same. This page has some more details, but I haven’t read it properly yet. Anyway, we don’t know HOW it works, but it does. Good enough.