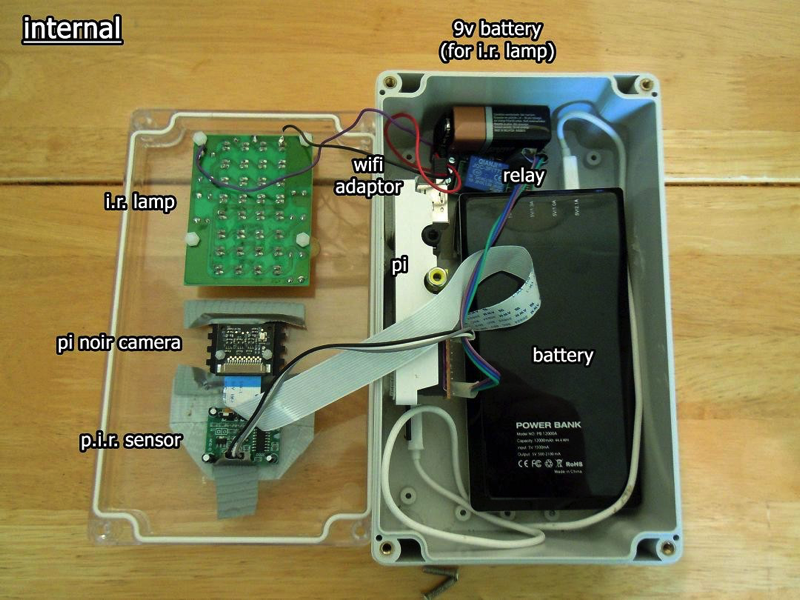 I’ve finally got around to constructing version 2 of the animalcam, following a cd card corruption in the spring.

It is broadly the same as version 1 but in a sturdier, more waterproof box. The clearer lid does help with the quality of the video however the PIR sensor was struggling to “see” through the plastic so I’ve drilled a hole in the lid and fitted the diffuser outside.

I’ve built a much smaller breakout board from the pi – simply a bit of veroboard with a 26 way plug on the bottom and a couple of connectors on the top for attaching the PIR & relay etc. The relay has been switched out from a latching to a standard type. Partly due to the latching one breaking and partly to simplify the connections. There has been no noticeable reduction in battery life.

The software has been updated to include a new raspbian and the new version of RPI web cam interface. The python script controlling it all remains as before – basically a botched together version of this one from raspberry pi spy, modified here, with the pipe calling discussion described in the thread here.

It now doesn’t start automatically so I need to plug in the wifi adaptor, access it via putty and get it running using nohup (otherwise it dies when the connection is terminated) To simplify this I’ve put it in a simple bash script:

Once running, I unplug the wifi as it is very thirsty on the battery.

Overall I’m pleased with the change. On the plus size it is now much sturdier, less likely to fall over and with a much clearer picture.