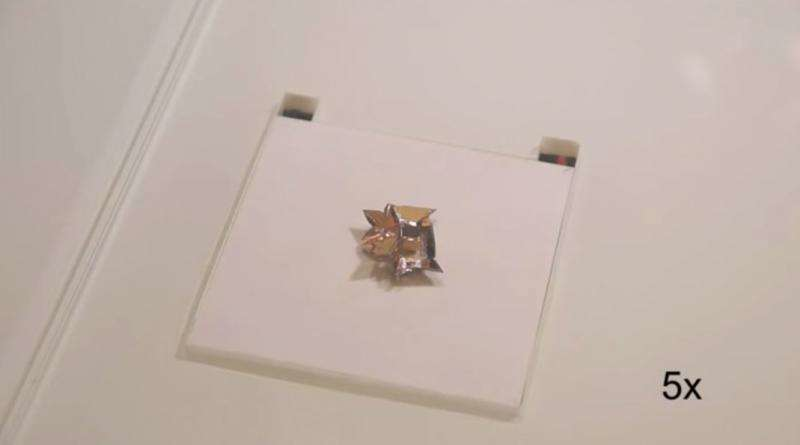 A demo sparking interest at the ICRA 2015 conference in Seattle was all about an origami robot that was worked on by researchers. More specifically, the team members are from the computer science and artificial intelligence lab at MIT and the department of informatics, Technische Universitat in Germany. “An untethered miniature origami robot that self-folds, walks, swims, and degrades” was the name of the paper, co-authored by Shuhei Miyashita, Steven Guitron, Marvin Ludersdorfer, Cynthia R. Sung and Daniela Rus. They focused on an origami robot that does just what the paper’s title suggests. A video showing the robot in action showcases each move.

One can watch the robot walking on a trajectory, walking on human skin, delivering a block; swimming (the robot has a boat-shaped body so that it can float on water with roll and pitch stability); carrying a load (0.3 g robot); climbing a slope; and digging through a stack. It also shows how a polystyrene model robot dissolves in acetone.

Even Ackerman in IEEE Spectrum reported on the Seattle demo. Unfolded, the robot has a magnet and PVC sandwiched between laser-cut structural layers (polystyrene or paper). How it folds: when placed on a heating element, the PVC contracts, and where the structural layers have been cut, it creates folds, said Ackerman. The self-folding exercise takes place on a flat sheet; the robot folded itself in a few seconds. Kelsey Atherton in Popular Science, said, “Underneath it all, hidden like the Wizard of Oz behind his curtain, sit four electromagnetic coils, which turn on and off and makes the robot move forward in a direction set by its shape.”

When placed in the tank of acetone, the robot dissolves, except for the magnet. The authors noted “minimal body materials” in their design enabled the robot to completely dissolve in a liquid environment, “a difficult challenge to accomplish if the robot had a more complex architecture.”

Read more and see a video of the robot in action here.