I can’t begin to capture the myriad ways that King City, a graphic novel of collected volumes written and illustrated by Brandon Graham, is the perfect comic for Makers. Between the detailed and schizophrenic drawings, the in-plot puzzles & traps, and altogether Rube-Goldbergian world aesthetic, there’s so much here for an aficionado of D.I.Y. to love. And at the heart of it are two protagonists subsiding solely on flavored cola and their own constant, usually mechanical, cleverness. 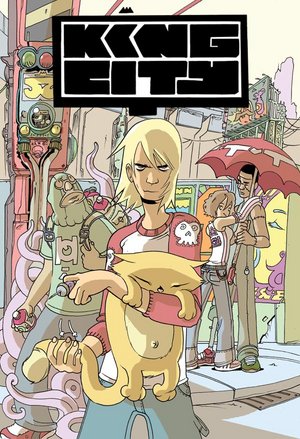 King City’s original title was Cat Master – named for the central protagonist, a slacker and former ne’er-do-well named Joe who joins an elite group of martial artists who can use various imbued animals – most often cats – to do basically anything with the right injection (act as telescopes, personal helicopters, cloning devices… etc.). Trainees in this group need to prove both their innate ability to wield this power, and an apathy which prevents them from ever using their talents to gain anything.

We join Joe, returning from his training with a cat named Earthling to King City: a sprawling, Harajuku-meets-Skate-Culture metropolis where anything and anyone can be bought, sold, ridden, or eaten. 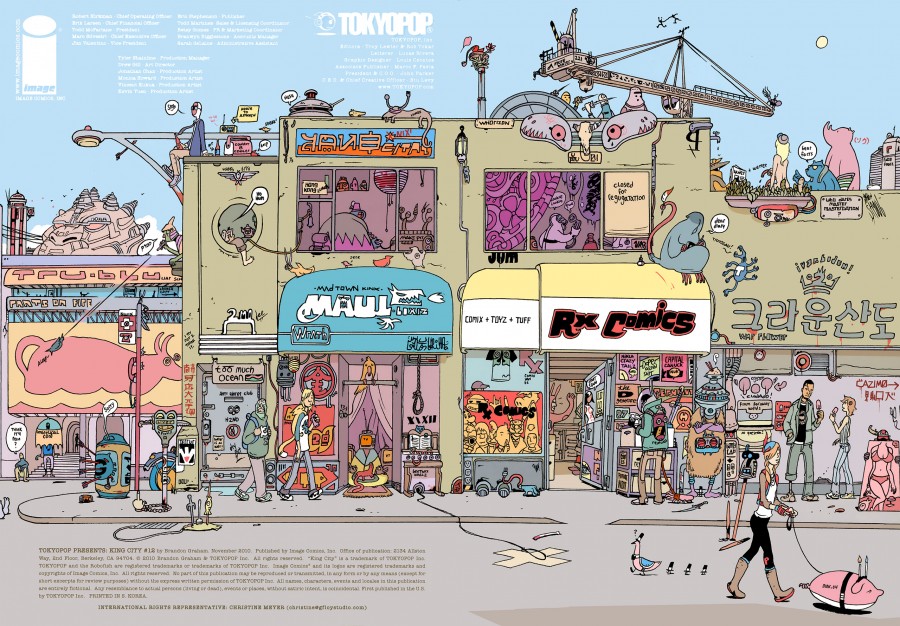 The main joy of this comic is in its world building. All credit goes to Graham’s sprawling and intricate art style. In scenes small and huge, Graham’s style is both haphazard and juicy; there are as many visual easter eggs on every page as a Where’s Waldo puzzle book.

Some panoramic pages look as if a mandala and a city planner had a baby. Cover to cover, opportunities are never wasted. This includes some rich discoveries on the inside flaps of either cover, not to mention the frenetic business in every wide shot. Graham doesn’t phone it in for a second, and as a result the comic can sometimes feel like someone’s found doodle-book from school with a through-line written in. 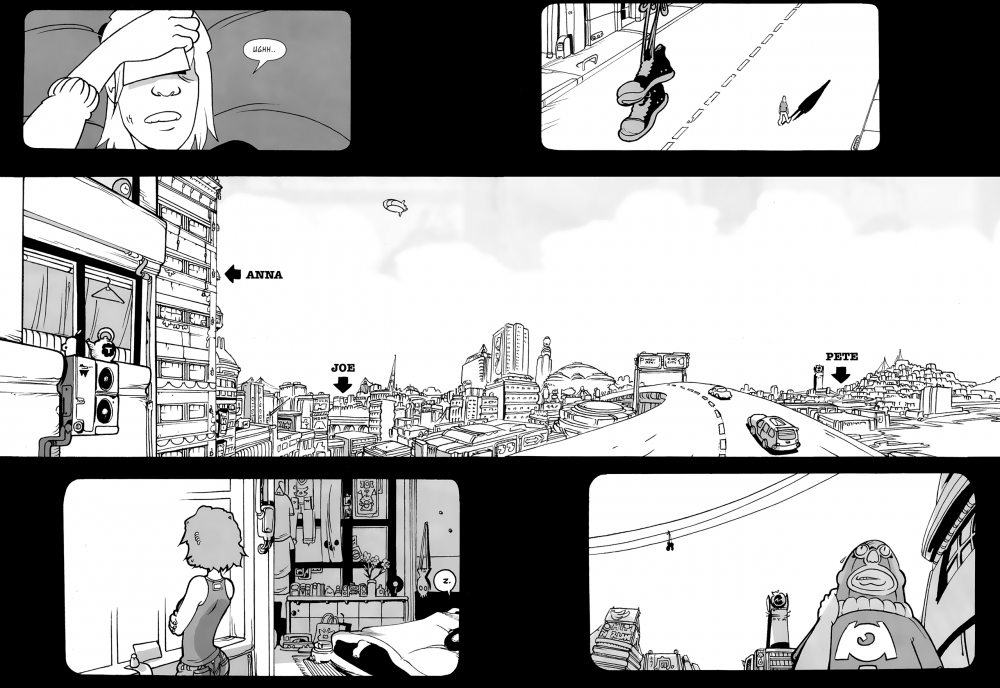 That through-line does occasionally feel secondary to the joy of romping through the city — but eminently likable main characters and the gradual unearthing of forces as big as the city itself keep the reader attached to the story. Joe, returning from training, reconnects with best friend Pete and ex-girl Anna and follows a trail of breadcrumbs into the seedy underworld of gang warfare — King City’s worst-kept secret.

Simultaneously, the book follows Pete’s moral crisis as a hired hand to a squad of goons, as well as Anna and new boyfriend Max’s wrangling with his PTSD and drug addiction from the Zombie Wars in Korea. It borrows tropes familiar to any parallel-realism nerd, from sources like Phillip K. Dick, H.P. Lovecraft, and World War Z – to name just the ones I’m familiar with. Doubtless there are others I’m not even appreciating. 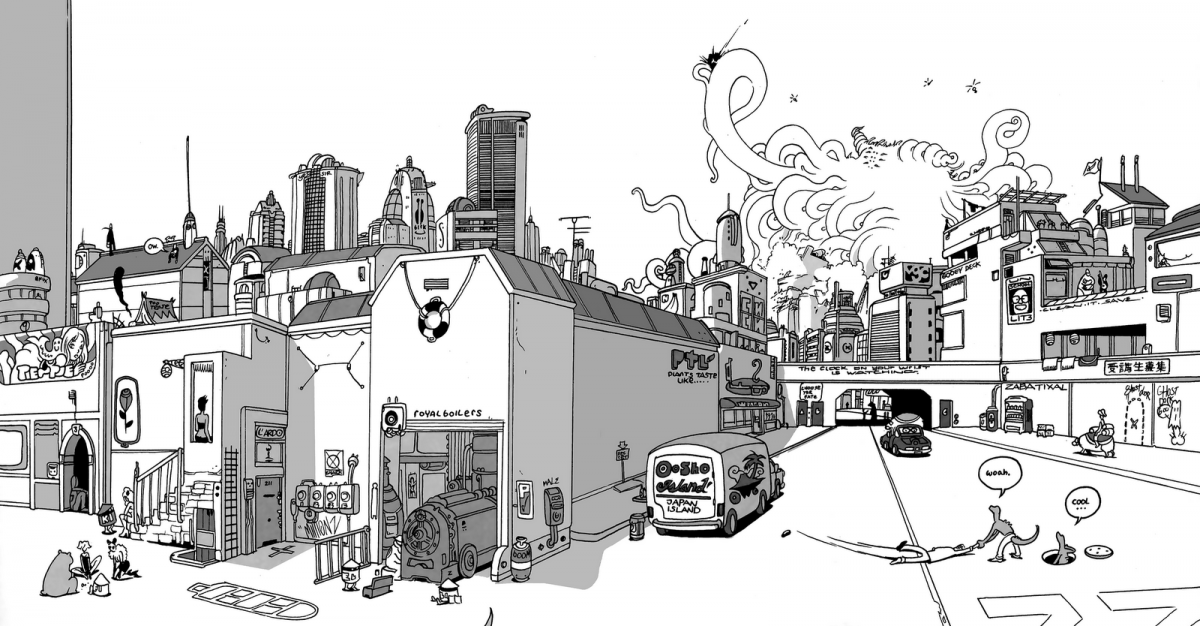 If the plot sounds dark and gritty, I will reassure you this is pretty far from Frank Miller – even when things get serious, the writing never lets them get too serious. “My name is Joe,” he introduces, standing dramatically in a doorway, be-smirked. “I pick locks. I pick my nose.” The gangs usually resemble The Warriors-style cyberpunks, weirdos, and supervillians. And of course, more often Graham is bouncing from pun to pun. A coin operated newspaper dispenser requests “a pound of flesh” in its coin slot.

His characters are also flexible and high-flying in their verbal acrobatics. “I’m sorry I was short with you, Joe” Anna whispers after a fight. “I’m only five foot two.” No matter where you go, the comic seems to say, you’d better be having fun. 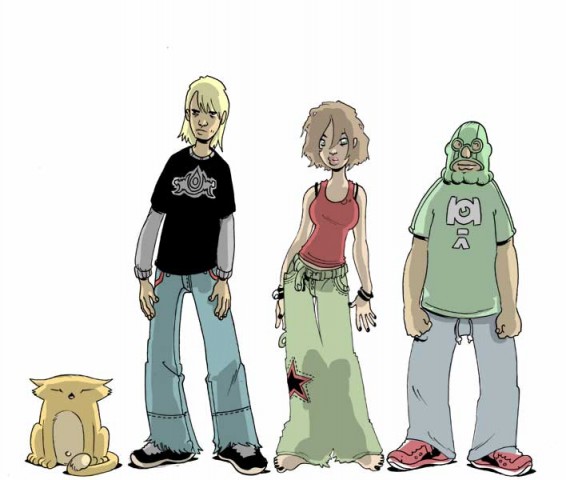 ​I promised you this comic was for makers, so I want to highlight one of several moments that reminded me of Adafruit:

“Outside his place, Pete’s built a water lock. You open the door by moving the statue onto the right pads in the right order, which is dependent on the time of day. If you get it wrong, you get a fire hose blast to the chest when you try to open the door.”

King City is thick but it reads at a mile a minute, and the reread value is off the charts. Like some video games, this is the kind of comic you read over and over for 100% completion. It’s also not for young kids – nothing explicit, but a healthy dose of cartoonish violence and a couple run-ins with adult themes. That said, it’s one of my very favorites and leaves me with a smile every time I put it down. Don’t miss it.

Check out our previous posts Bee and the Puppycat, Spacetrawler, Grrl Power, Krazy Kat, and She-Hulk!