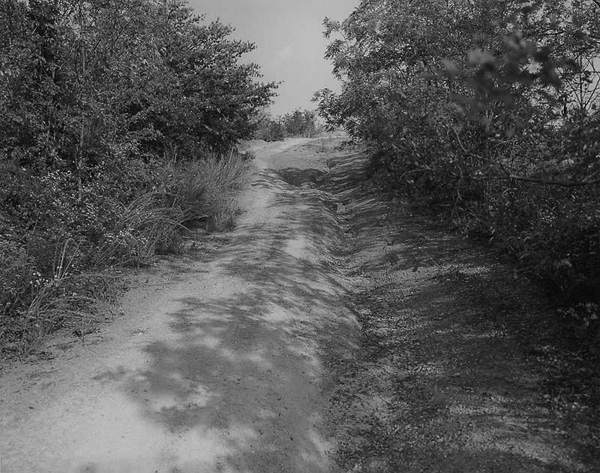 It was only recently that I decided on a name for this series: Off Route 80. Before that the work done in Grapevine Hollow, West Virginia, since 2006 was provisionally called New Landscapes. My reticence in giving the series a title stemmed from a desire to resist naming a specific place or region, in this case Appalachia with its negative connotations dating back from before the Civil War. To do so would be declaring the work a documentary record –which of course it is, albeit a highly subjective one, belonging to a tradition where the artist admits to being part of the situation portrayed.

My 1994 monograph Grapevine is a visual diary of the first five years I spent in the community. As such Grapevine is a place I have revisited now for over twenty years, much like Atget’s parks. Central to the meaning here and in most of the work is that these photographs and videos share the vantage point of a liberal female artist from New York City.

Off Route 80 also draws on our collective visual memory, images we carry within us, similar to the Farm Security Administration’s photography archives. As for the title, America is full of Route 80s, that are certainly more famous than West Virginia’s. Yet I suppose if you wanted to take the time and look for a tiny route 80 in West Virginia, you would find a miniscule reference to a Grapevine Branch on the map. Otherwise it might be one of many places in West Virginia also called Grapevine of which there are at least four. Perhaps Grapevine represents any American community outside the reach of urban life: a place in the imagination, an Eden, off-the-map, off-route as opposed to the notion of “getting one’s kicks on Route 66.”

The natural versus the urban world is the arching theme here. This series also draws upon the Romantic traditions of literature and painting which highlight our place in nature. Mundane rituals of daily life are not relevant. In this seemingly bucolic setting, the intimate, formal landscapes provide a sense of place but also hint at no return. Most were taken while 4-wheeling in the mountains. There in the woods one can never be too sure of one’s bearings. In the large expanses seen from the mountaintops, there are shortcuts to everywhere and nowhere. While remaining in the here and now, possibly as a prisoner, one sees the lush, enveloping landscape in a new way.

For the video portraits, local inhabitants gaze back at the viewer. We are caught in the intensified subjects’ gaze. One cannot escape a relationship to others particularly in Eden. How long the viewer subjects him or herself to this condition is their own decision. Relationships are uncomfortably overturned or briefly endured. As in Yeats’ “Stolen Child”, the would-be hypnotic natural sounds and sights seduce and take us away from this (another) imaginary world.

See the full series here and check out more or Susan Lipper’s work on her site: www.SusanLipper.com

Comments Off on Susan Lipper’s Off Route 80 #celebratephotography