Adafruit celebrates the National Week of Making with a trip to the White House! @whitehouseostp #NationofMakers #WeekofMaking

Last week, President Obama issued a proclamation declaring June 12 through June 18 National Week of Making. To celebrate, the White House hosted an event to kick-off the week and Adafruit was invited! I went on behalf of the company and was thrilled to be able to spend some time in Washinton DC and to see some of the inside of the White House. The event was live-streamed, you can watch video of the full thing above!

When we first arrived they showed us this video explaining what a ‘maker’ is.

Here’s the White House statement about the week and the event we attended:

This morning, from 8:30-11:30am, we kicked-off the National Week of Making, which lasts from June 12 to June 18. The White House event included announcements and progress updates on the President’s call to action to create a “Nation of Makers.” We heard from Makers from across the country, organizations helping to support them, as well as senior Obama Administration officials.

The Week will coincide with the National Maker Faire here in D.C., featuring makers from across the country and will include participation by federal agencies including: the Department of Education, National Science Foundation, U.S. Agency for International Development, U.S. Small Business Administration, Institute of Museum and Library Services, National Institute of Standards and Technology, NASA, Corporation for National and Community Service, Department of Homeland Security and the Smithsonian.

Last year, on June 18, President Obama hosted the first-ever White House Maker Faire and issued a call to action that “every company, every college, every community, every citizen joins us as we lift up makers and builders and doers across the country.” At last year’s Faire, President Obama welcomed people of all ages who are funneling their ingenuity into amazing projects, developing creative solutions to important problems and bringing their innovations to market.

If you or your organization has plans to support students, inventors, designers, builders and other makers in your community, let us know by completing the form below. We look forward to announcing progress on the President’s call to action during the Week of Making. 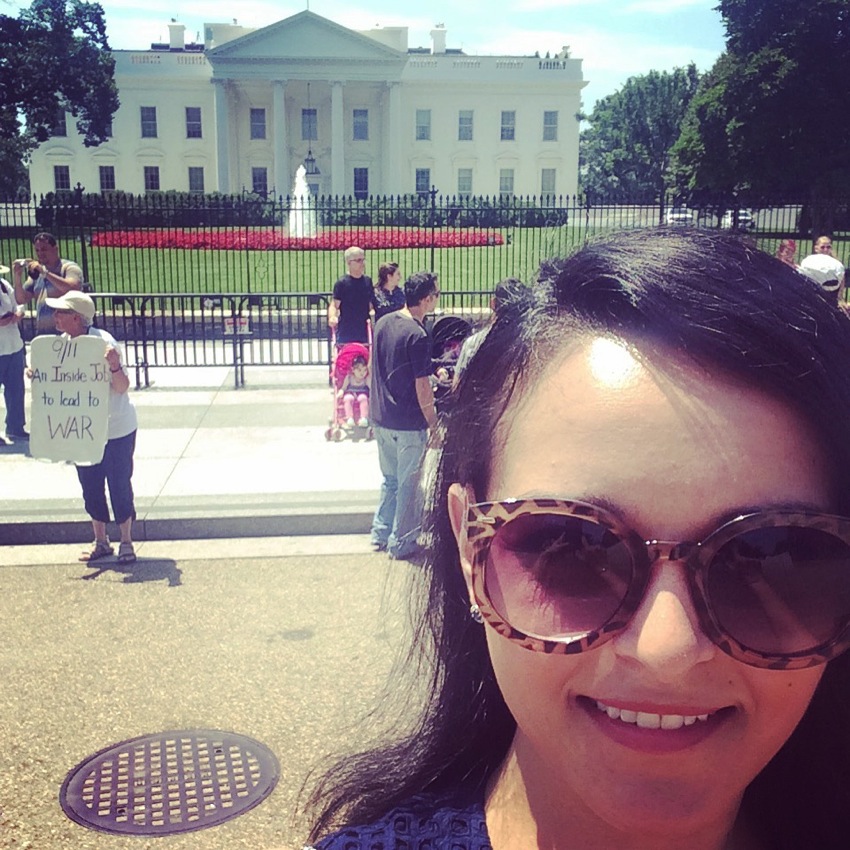 I also got to have an “official” White House name tag which I will cherish forever! 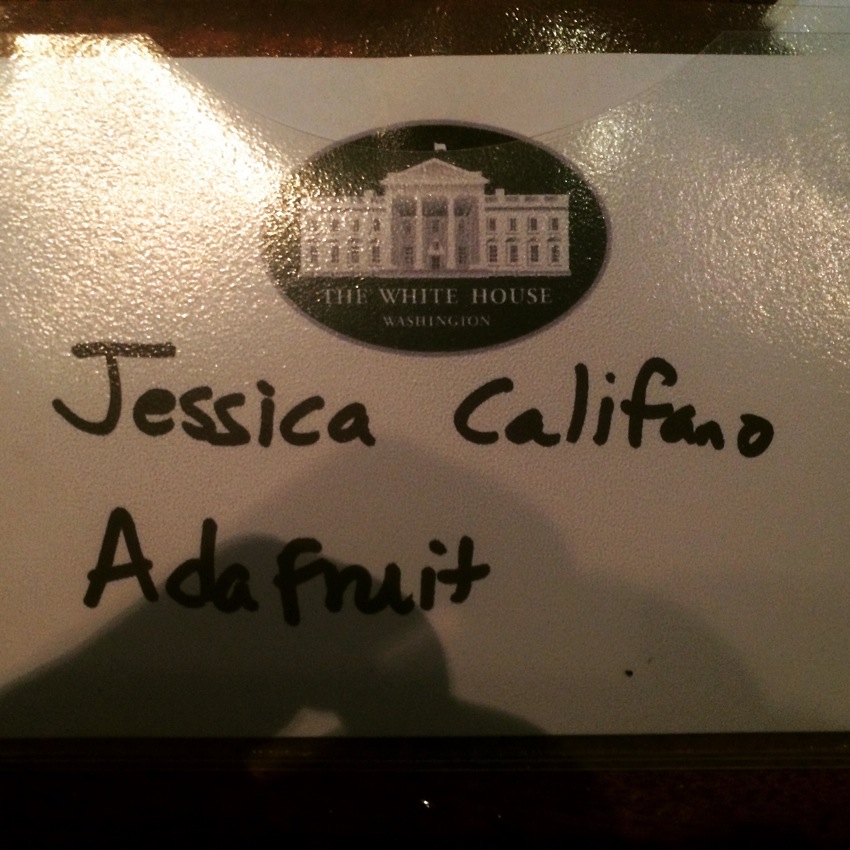 We heard from so many amazing people during the event. First off, we heard from the first ever Senior Advisor for Making, Stephanie Santoso, and OSTP Senior Policy Advisor Rafael López. 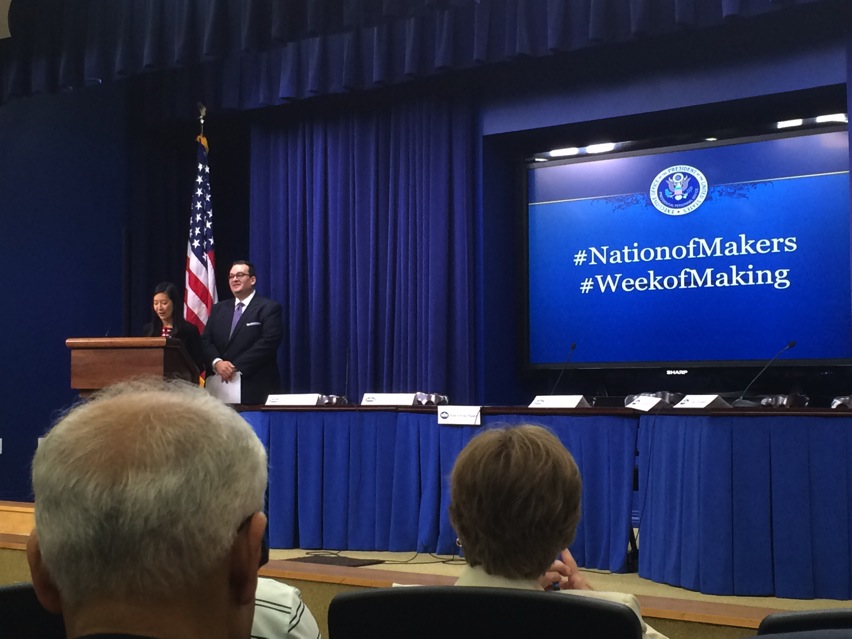 Throughout the event, they brought makers of all ages and races up to the podium to share their “Honored Maker Stories”. This was probably my favorite part of the whole event. We heard from so many amazing makers like Emily Pilloton, founder of Project H – a nonprofit that teaches youth to build and design spaces for their community. She showed off this awesome picture of the welding class that she teaches for young girls – so cool! 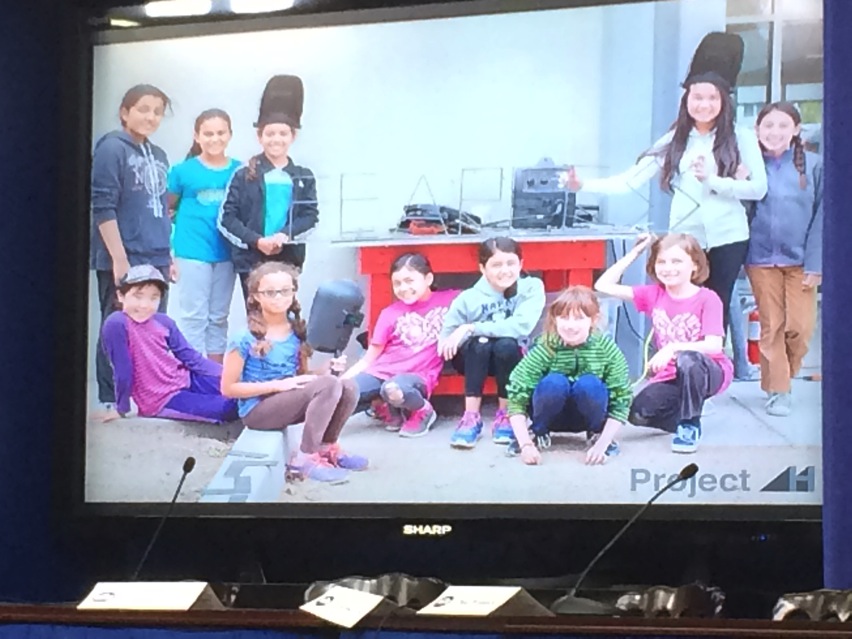 Another inspiring Maker story we heard was from Coby Unger and Aiden Robinson. Coby and Aiden used 3D printing to design a “swiss army knife” of prosthetics for Aiden – he showed off his Lego arm which was really neat. Apparently, he has a full arsenal of kid-friendly superhero prosthetics. You can check out more information on the project here.

There were so many other great maker stories that we heard during the event. Make sure to check out the video at the top of the post if you want hear them all!

There were two different panel discussions that we got to watch as well. The first was called “Connecting Making to Education” and featured Dale Dougherty from Maker Media, Dr. Joan Ferrini-Mundy from the National Science Foundation, Philip Gonsalves from West Contra Costa Unified School District, Alex Suraskey-Ysai from Satellite Shelter, and Dr. Chad Womack from United Negro College Fund. The discussion was great and when one of the attendees asked the panel what the number one thing needed to connect making to education was, the response was “curriculum”. 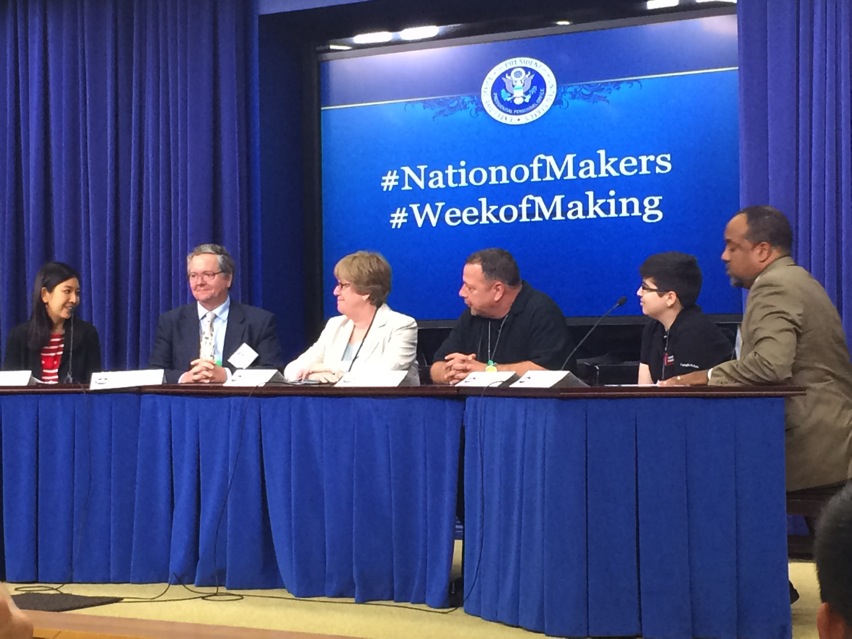 The second panel discussion was “Innovation & Entrepreneurship Through Making” and had a lot of talk about maker business. That panel consisted of Matthew Burnett from Maker’s Row, Althea Erickson from Etsy, Michelle Lee, Director of the U.S. Patent and Trademark Office, Bernie Lynch from Made Right Here, and Mo Mullen from West Elm. There was a lot of talk about manufacturing overseas vs. domestically, how to retain intellectual property, and what the U.S. patent office is doing to help makers with lower incomes get patents for their inventions. 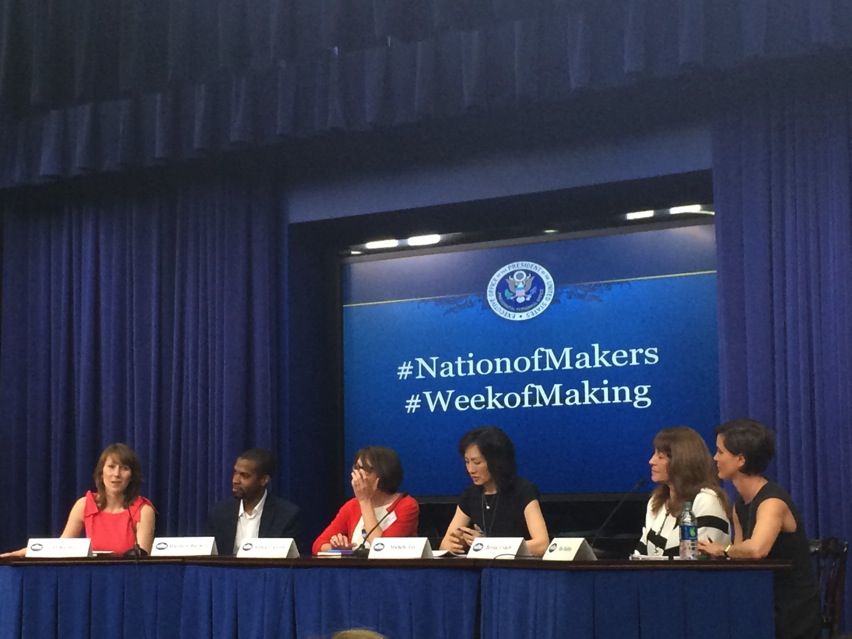 The last “Honored Maker Story” that we heard was from Audrey Hale, and incredible young maker who was introduced by Dr. Glenn Green, CTO of NASA. Audrey decided to re-create the helium balloon-lofted aerial photography rig project that she found in one of her mom’s old Make Magazines. She didn’t have the funds to build it but made a kickstarter and was overwhelmed with the support she received. She is now working on an ebook documenting her build! 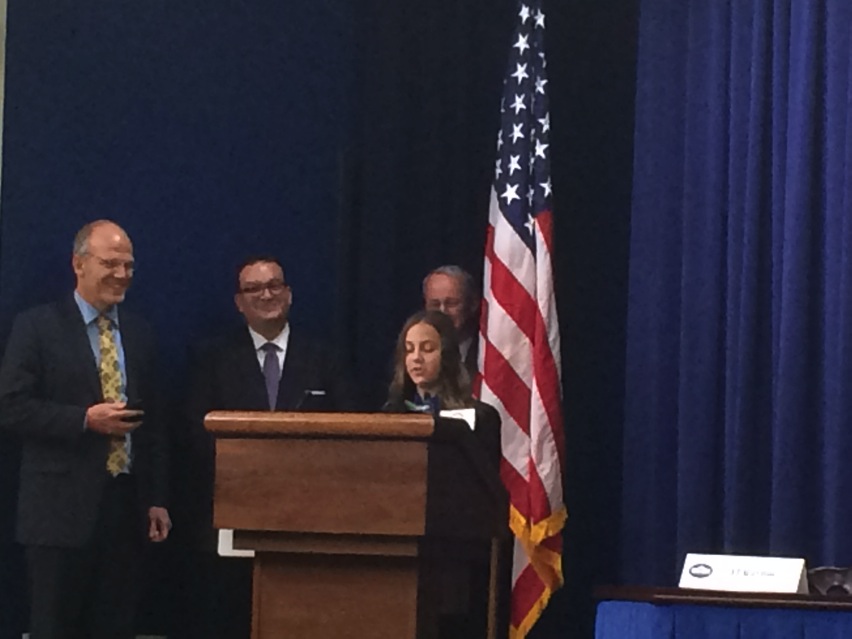 After rushing the stage for a group picture with everyone at the event, we heard closing remarks from U.S. Chief Technology Officer Megan Smith. She talked about making in the US and even pulled out a Raspberry Pi and an Arduino during her speech. I got to say hi to her after the event was over and she told me that she loves Adafruit! 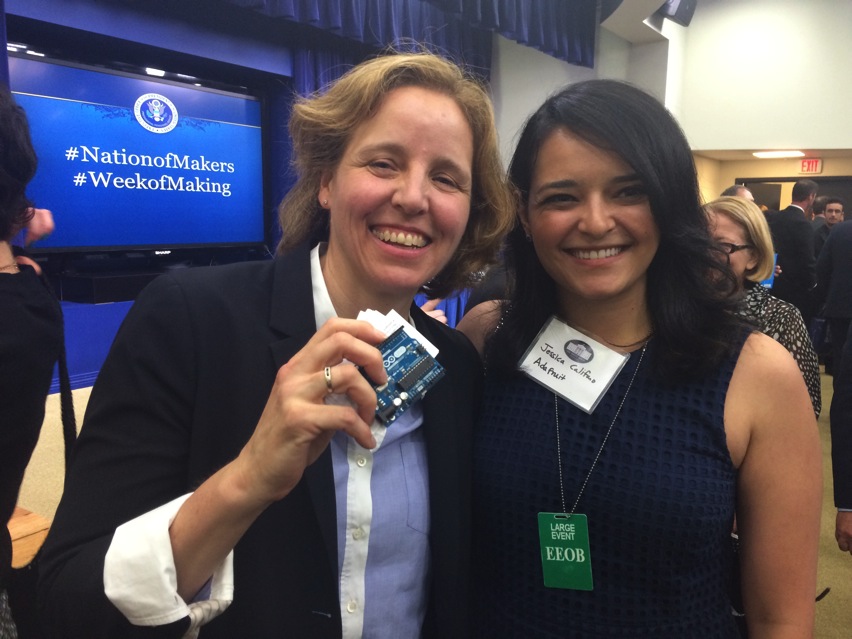 I spoke with many different educators, makers, and engineers after the event and all of them had nice things to say about Adafruit and our reach as a company that not only sells parts to the maker community but also inspires engineers of all ages through things like our live shows, learning system, forums and more.

It was a great first trip to DC and I hope to go back soon! On our way out we received a treat – official President of the United States chocolates and a copy of the President’s proclamation declaring the National Week of Making 2015. It was a sweet end to a great event. 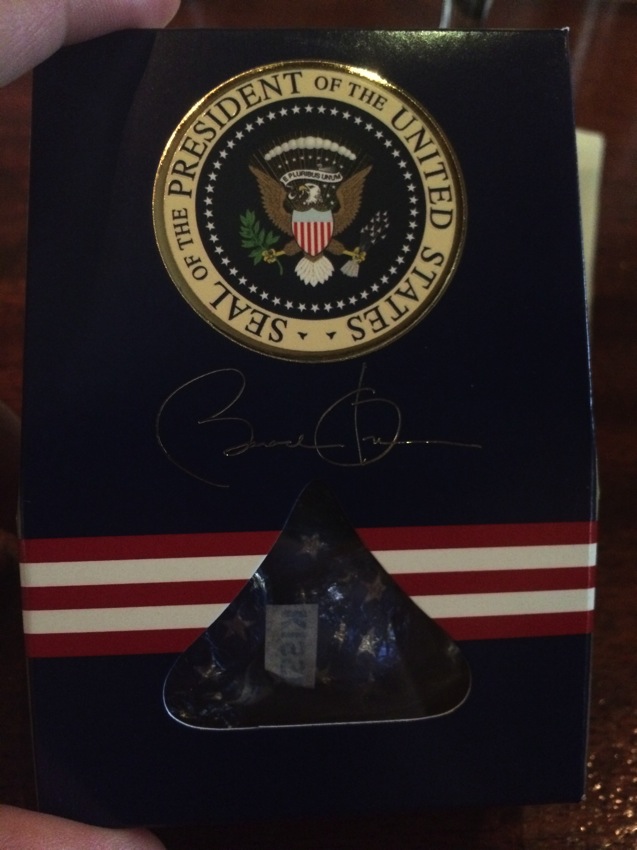 Comments Off on Adafruit celebrates the National Week of Making with a trip to the White House! @whitehouseostp #NationofMakers #WeekofMaking