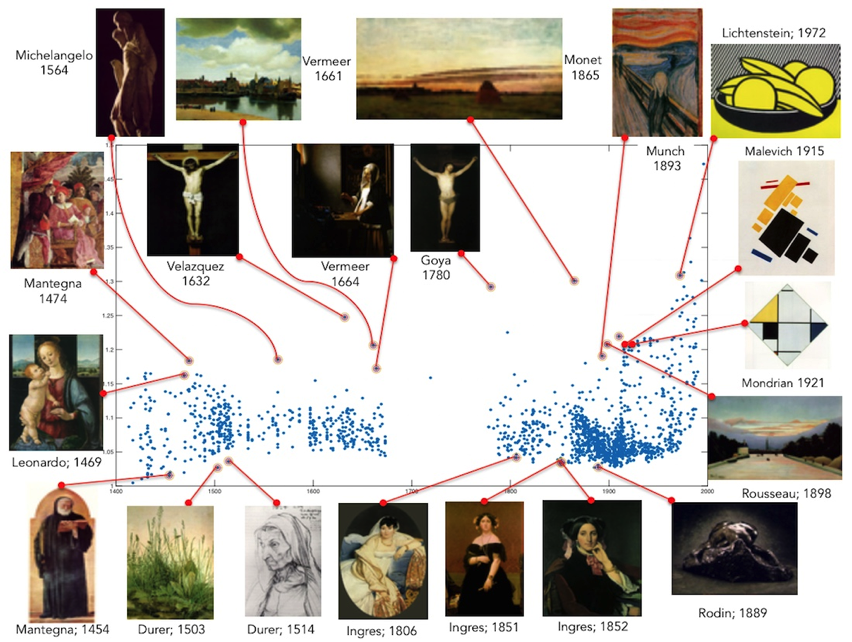 Do you think that there is a way to quantifiably measure creativity in art? Via Hyperallergic.

Two computer scientists have developed an algorithm that measures creativity in visual art. At the end of the month Ahmed Elgammal and Babak Saleh, an associate professor and PhD candidate, respectively, in the Department of Computer Science at Rutgers University, will present their paper “Quantifying Creativity in Art Networks” at the International Conference on Computational Creativity, chronicling the results of their attempt to create a computer algorithm that tabulates the originality and influence of paintings. The results are mixed; Johannes Vermeer, Claude Monet, and Georgia O’Keeffe fare well, while Jean-Auguste-Dominique Ingres, Albrecht Dürer, and Camille Pissarro compute as comparatively uncreative. A closer look at Elgammal and Saleh’s methodology offers clues as to why.

Their algorithm was developed by using computer vision technology to assess the visual characteristics of the 1,710 artworks in the Artchive database and 62,254 works on WikiArt. They focused specifically on paintings, and even more specifically on “Western paintings,” while “removing genres and mediums that are not suitable for the analysis such as sculpture, graffiti, mosaic, installation, performance, photos, etc.” Analyzing the images from the two databases, the algorithm isolated a certain number of visual concepts (as many as 2,659) in each artwork based on the presence of depicted objects like crosses, horses, faces, and so on. The algorithm, in other words, was calibrated for representational art, which explains the off-the-charts creativity readings generated by abstract art from the early 20th century.

More telling, however, is the definition of “creativity” the pair used to guide their research. “Among the various definitions of creativity it seems that there is a convergence to two main conditions for a product to be called ‘creative,’” they wrote. “That product must be novel, compared to prior work, and also has to be of value or influential.” Consequently, the algorithm promoted works that boasted unprecedented visual features as evidence of their novelty, and championed those it deemed “influential” if those original features reappeared in later works. For instance, a Dürer portrait from 1514 scored very low on the algorithm’s creativity scale, while Kazimir Malevich’s “Red Square” (1915) was found to be one of the most creative artworks of the last 600 years. Little allowance is made for artists working in established genres or with frequently recurring subjects like, for instance, most religious paintings. The algorithm champions newness, not sustained excellence in a specific genre.