Minecraft on the Cover of The New Yorker 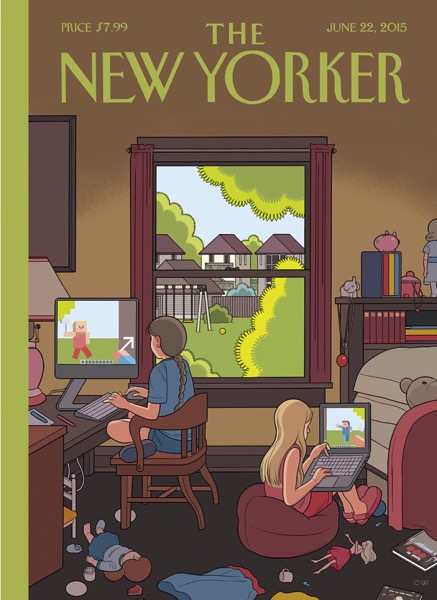 Any parent of a four-to-x-year-old will likely understand this week’s cover. Most everyone else will probably be confused.

Minecraft is a video game invented, in 2009, by Markus Persson (a.k.a. “Notch” to the seven hundred trillion humans who play it), as a sort of intuitive reimagining of the landscape of his Swedish childhood, but with zombies. Simultaneously writing and releasing the game, like a sort of wakeful brain surgery, Persson and his staff coded while an algorithmically increasing number of players sent suggestions, found bugs, and played and played and played Minecraft, before the full version was released, in 2011. Then the whole genome of the project sold to Microsoft last year, for two and a half billion dollars. (Concerned parents can view the fascinating documentary “Minecraft: The Story of Mojang” for more info.) Persson recently became notable to the over-forty set for buying a seventy-million-dollar house in Los Angeles (he only very recently became the owner of an automobile, and appears, like me, to dread human contact), and he no longer works on the game.

Comments Off on Minecraft on the Cover of The New Yorker