The Coverup: An LED fig leaf for Bob the mannequin #WearableWednesday

We’ve covered Bryan’s awesome LED trenchcoat project before and recently he sent in his latest work. We’ll let him explain:

I’d like to introduce you to someone who has been part of my artistic journey for a few years now. His name is Bob. Bob is my mannequin. He’s a handsome one, and he knows it. He lives in my studio, where he often holds up the wearable art pieces I create while I’m working on them, and sometimes does long gallery stints, tirelessly modeling my creations.

But I have to admit…Bob spends a good bit of the time naked. And I think it was getting to him. Here’s Bob, before. Bob is of course a model, and models are rarely shy with their bodies. But Bob…he’s a little self conscious. With reason, if I may say so.

In two weeks I’ll be at Electric Sky in Skykomish, and Bob’s coming with me. I’ll be creating animations for this year’s presentation of the trenchcoat. So during the day, Bob will be busy holding up the trench. But at night, I’ll be leaving his naked ass in the common area. He’s been fretting about that a bit.

So I decided to reach into the past for a, um, solution to Bob’s issue. Starting around the 1530s, depictions of male nudity in sculpture and statuary were deemed unchaste, and castings of fig leaves were often affixed to such artworks. While no artist would condone such an act, you have to admit that such a treatment on Michelangelo’s David could have saved the poor guy from centuries of tittering mockery by every visiting schoolchild.

Enter my modern satirical iteration on the mid-1500s censorship device. It’s a felt fig leaf with adhesive felt details. Behind it is a modified LeafLabs Maple microcontroller (yes, really) and 11 green LEDs run off PWM channels so that the Maple can control their brightness individually. All is powered by a 1600 mAh LiPo battery for 12+ hours of continuous chastity. And it’s finished with a leafy ribbon girding that Bob tells me is, indeed, fabulous.

Given its origins in history, my modern Fig Leaf does, I suppose, deserve a proper artist placard:

Fig Leaf explores the irony of modern attitudes towards nudity and sexuality. In the early 1500s, conservative churches and governments began censoring public sculptures with castings of fig leaves. Fig Leaf turns this idea around, drawing attention to the leaf itself and thereby the mysteries that lie beneath it. 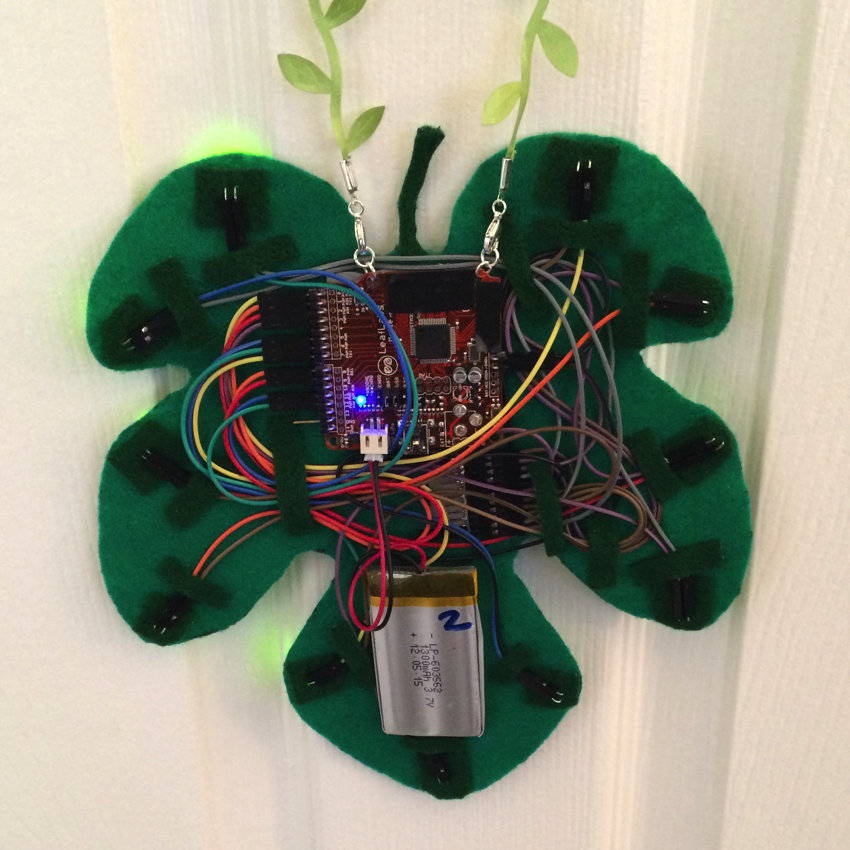 Comments Off on The Coverup: An LED fig leaf for Bob the mannequin #WearableWednesday