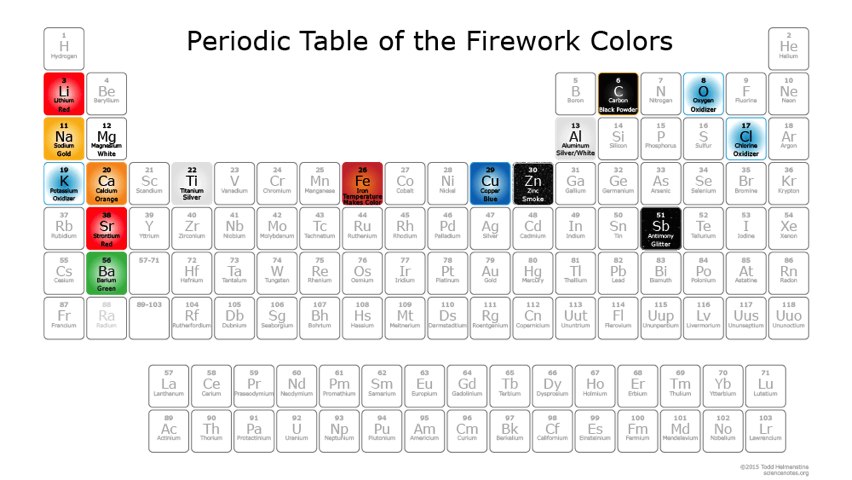 Periodic Table of Fireworks Via Sciencenotes.org.

Fireworks are a colorful display on summer nights. Have you ever wondered about the chemistry of those bright colored explosions? The colors produced depend on the elements added to the firework before they are launched. This periodic table of fireworks highlights the common elements used to produce colors and effects.

Lithium is used to add red color to a firework. The most common form of lithium used is lithium carbonate, Li2CO3.

Carbon is typically black in color, making it useless for night sky displays. It serves as the fuel for the combustion of the firework. It is also important in fireworks as a component of black powder. Black powder is used as the propellant to launch the firework into the sky. Carbon is also found in the ash of black snakes fireworks.

Oxygen does not impart a color to fireworks, but oxygen is essential to cause the reactions that produce the colors. It is also the main element in the combustion of the firework.

Sodium burns with a bright yellow color. Common table salt NaCl is often used for yellow color in a firework.

Magnesium imparts a bright white light when burned. Magnesium chloride, MgCl2 is used to produce bright sparks and enhance the brilliance of a firework.

Aluminum metal is used to produce silver colored sparks. The most common use of this in fireworks is the sparkler.

Chlorine is a common component of the metal salts used to produce colors in fireworks. It is also found in many of the oxidizing agents used to fuel the combustion reactions.

Calcium is used to produce an orange color to fireworks. Adding calcium to a firework also deepens the colors produced in the combustion.

Iron is added to produce sparks. The color of the sparks depends on the temperature of the burning iron. The color can range from red to bright orange in fireworks.

Burning copper salts are responsible for the blue colors seen in fireworks.

Zinc metal is used to produce smoke effects in fireworks.

Strontium salts are used to produce red in many fireworks. Strontium is also used to stabilize the chemical mixtures in fireworks.

The glitter effect seen in many fireworks is produced by burning antimony.

Comments Off on Periodic Table of Fireworks #4thofJuly #fireworks #chemistry