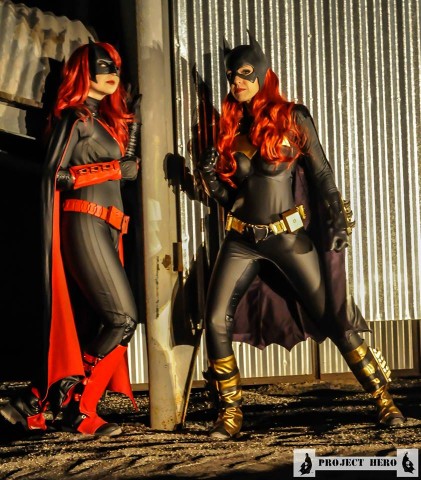 Charitable cosplay makes up a not insignificant portion of the costuming community. Costumers come together to form non-profit groups that appear at events such as fundraisers or participate in activities such as visiting children’s hospitals. One such group is Project: Hero. They have several members and Jackie Backer of KnowOne’s Designs made a Batwoman costume to be part of the group’s Bat Family. She crafted the ensemble last year and went for a look right from the comics. She procrastinated on the mask until the very end of the build:

Now comes the mask…. I was so worried about how I was going to pull this off, so being the responsible adult that I am, I saved that till the end. Like 2 days before the end. I panicked, made a snap decision that it was going to be made out of leather. Don’t know why I decided that as I have never in my life worked with leather. In fact, it grosses me out. I had been vegan for 6 years in a past lie and the thought of wearing something else’s skin on my face made me feel too close to Buffalo Bill for my tastes, however I had made a decision and had to go with it. My wonderful father-in-law has everything and lent me some mask making leather he had lying around and I went at it.

The internet is a beautiful thing. I watched a few tutorials and was on my merry way. My first attempt was a success until I put it on and hated the white eyes. Good idea in theory and works really well on masks that you don’t see any part of a human face. Made another one, added some more lines that I burnt into it with an old soldering iron and added more texture with a small leather working stamp, then I wet formed the whole thing over a kids batman mask and added the details I wanted. 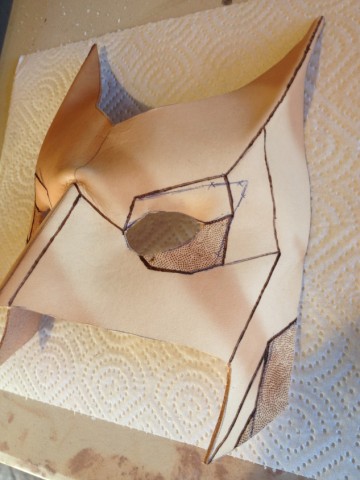 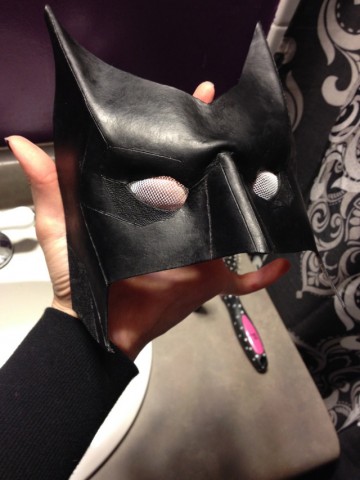 Read more about the making of the costume at KnowOne’s Designs.

Comments Off on Batwoman Costume Build