Courage the Cowardly Dog Queen of the Black Puddle Cosplay 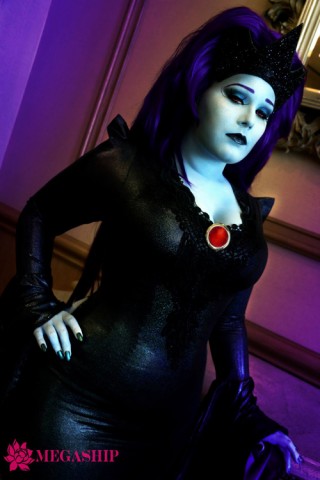 It’s been several years since I’ve heard anything about Courage the Cowardly Dog. The animated series with a horror slant was geared towards children and aired on Cartoon Network beginning in 1999. I’ve never seen cosplay based on the cartoon until now, and of all the characters to dress as, The Queen of the Black Puddle is the best choice. She only appeared in a couple of episodes, but she made an impression.

Chelphie Cosplay wore the costume made by Coquetry Clothing for Halloween last year. She said:

This was one of the only cosplays I’ve ever commissioned, with the base dress being made by Coquetry Clothing, and then I added details like the purple lining on the sleeves, the Venetian lace on the bodice, and the red and gold medallion. The tiara is craft foam with iridescent black glitter added and the wig is two 40″ wigs purchased on eBay and sewn/glued together, teased to infinity and beyond, with some purple tissue paper for stuffing/height. I do the body paint myself and used Mehron Paradise AQ in “Light Blue.”

It’s a fun cosplay, despite how obscure it is, but I love seeing the excitement/amazement on the faces of those that do recognize it!

Filed under: cosplay, costuming —
Tags: Courage the Cowardly Dog, The Queen of the Black Puddle — by Amy Ratcliffe