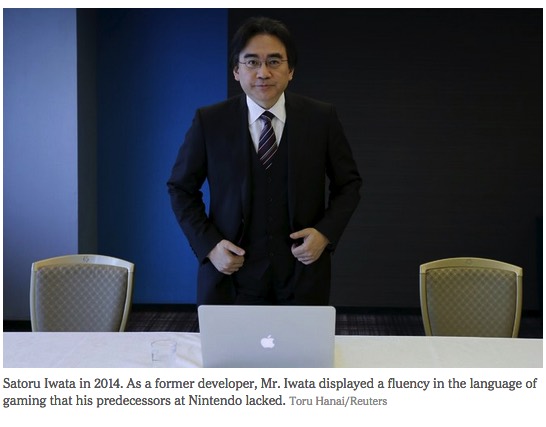 Satoru Iwata, who as chief executive of Nintendo oversaw the introduction of gaming systems such as the Nintendo DS and the Wii, died on Saturday, the company said in a statement.

The statement said the cause was a bile duct growth. He was 55.

A former video game development star, Mr. Iwata was appointed the president of Nintendo in May 2002 and became the chief executive of Nintendo of America in June 2013, the company said.

He was the first chief executive to come from outside the Yamauchi family, which founded the company in 1889 as a manufacturer of playing cards and ran it until Mr. Iwata was appointed.

and an interesting quote from the mmo-champion boards:

He was literally a programming legend. He programmed Earthbound from scratch, redoing the code in the process. He also taught GameFreak a lesson or two with Pokemon Gold and Silver when they only fit Johto on the cartridge… he compressed that data so well they were able to get Kanto on it too lol He also ported the battle code for Pokemon Stadium to the N64 blind. Nintendo is literally run by programming gods.

Comments Off on Satoru Iwata