A new edition of Adafruit’s comic reading list — this week it’s Akira by Katsushiro Otomo, from kitting’s own Lucas!

The masterwork of Katsuhiro Otomo that is Akira is, in my opinion, not only one of the greatest comics of all time, but deserves a place in the pantheon of media that should be considered required consumption for the worldly human being.

Akira is a work that calls others to the challenge of excellence in their own creations. Look at interviews with many if not all of the most successful mangakas (Japanese comic artists) of today and they will almost inevitably list Akira as having inspired them in some way (if not as the defining moment on their career paths). Once you have read Akira you will see its influence literally everywhere in culture all over the world.

So what is it? 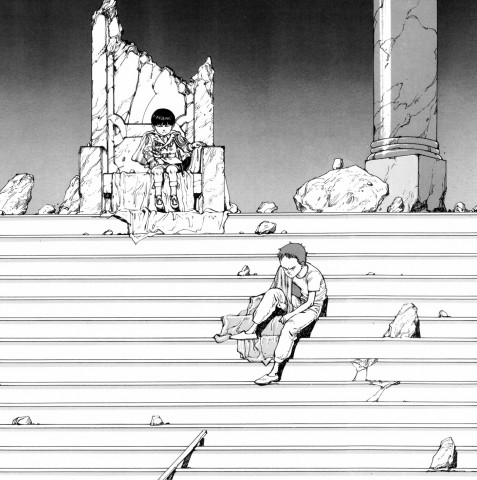 To say that Akira is the story of a teenage biker gang in a post WWIII Neo-Tokyo is not entirely misleading but it would be akin to saying Harry Potter is about a kid who finds out he’s a wizard, or that Star Trek is about exploring space. Indeed, Akira begins with a biker gang getting into a strange accident on the freeway but the story rapidly evolves as the main characters find themselves pulled into mysteries of the state that penetrate its very core. 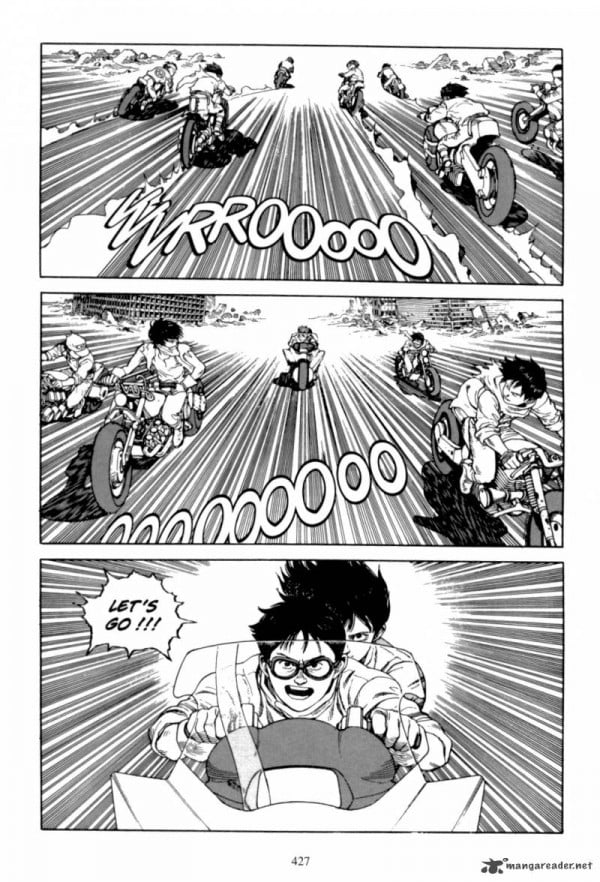 Who or what Akira is should be left to the reader to discover if they do not already know by osmosis. The reader will discover what Akira really means by following the main members of the biker gang as one of their members is kidnapped by the government, another becomes embedded with revolutionaries and the whole of the world becomes swept up in the madness and tumult that befalls Neo-Tokyo. 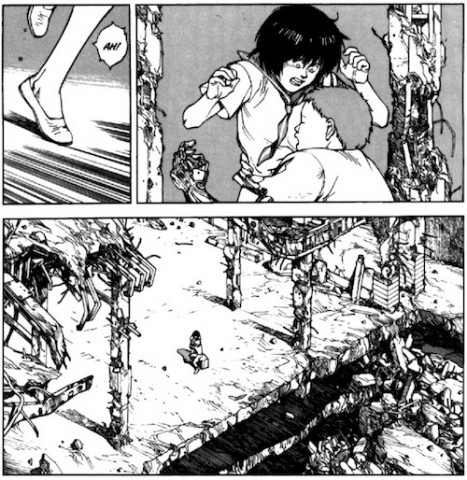 Akira is an epic.

Akira could be described as a Lord of the Flies story on gamma-ray level steroids… but it is so much deeper than that tired rubric. It is a work that explores many different themes among which are: power plays between military and government, gang violence, drug abuse and use, spirituality, the perils of science, romance, sociopathy, metaphysics, cult behavior and good old fashioned rivalry. 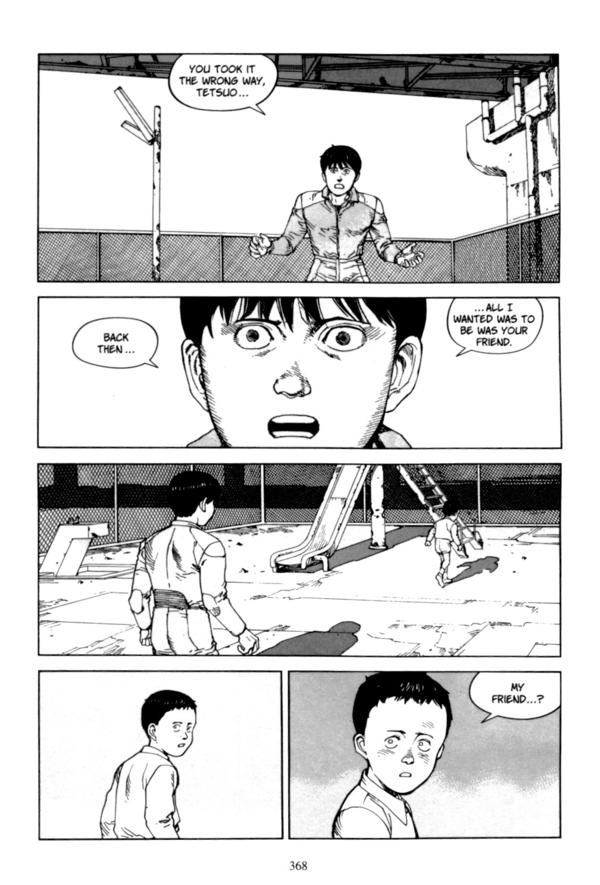 Do not from this description assume that you will be struggling to get through a sluggish, overly cerebral read. Quite the contrary. Akira is a fast-paced, hold on to your eyeballs adventure that is as addictive as it is impeccable. Otomo excels at depicting motion, action and scale. The composition of his drawings are legendary and each page is frame-worthy. In fact, I happen to have print of a page framed in my room right now. (No, really.) 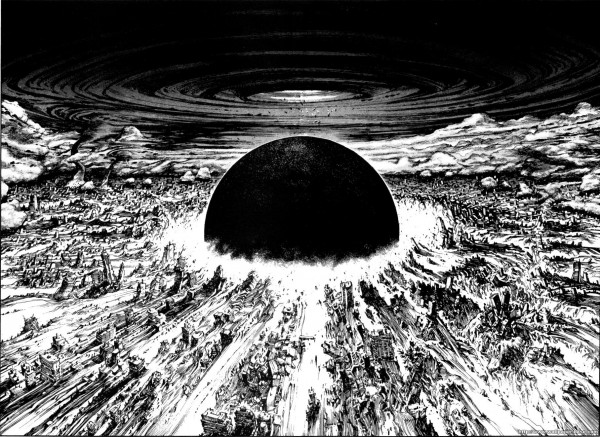 Akira comes in a few formats. The comic was originally published as a weekly, the way most manga(Japanese comics) are, in black and white. There are smaller color issues that can be found and the preference between color and black and white is a personal one. Though, I think the merits of reading manga in its original black and white are not wasted on illustrators and appreciators alike. The most common format is the black and white in full volume form of which there are six volumes. 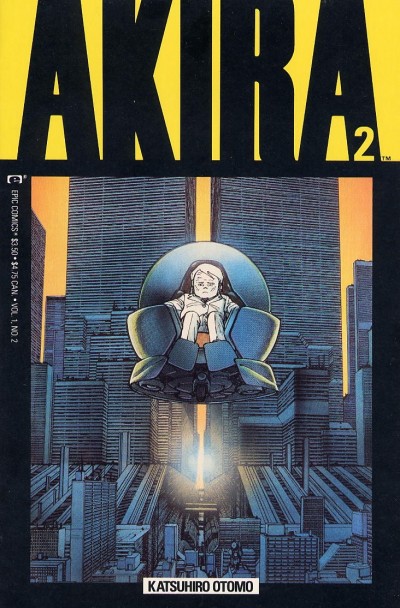 Before I stop gushing I think it may be appropriate to offer some words of warning and opinions:

1. For parents: Akira has nudity, it has violence, these are not its ends but features it contains.

2. Akira is quintessentially Japanese. Japan was the victim of not only the first nuclear bomb used during war time but the second as well. This fact has colored Japanese culture in ways that are difficult for citizens of other nations to wrap our heads around. Akira is a major inheritor of this fact. (Which is why the idea of a westernized live-action adaptation is so onerous)

3. Be prepared, once you burn through the first volume you may experience psychological discomfort or pain if the second volume is not close by or immediately at hand. Don’t worry, that’s how it all starts…

4. Be patient. In the beginning you may not be able to distinguish one Japanese teenager with black hair from the other. In time the subtleties that are great character design become apparent, just keep going.

5. **DO NOT** AND I REPEAT **DO NOT** SEE THE MOVIE FIRST, (IF YOU CAN HELP IT).
Otomo made an animated film whilst the comic was being published. It is incredibly well animated and contains much of the most shocking and memorable imagery of the comic with about one millionth of the substance. Would you want to watch an hour long movie that crams all of Star Wars into that short space, has a different ending and has previously important characters make on screen, dialogue-free cameos? Would you want that to be your best friends introduction to Star Wars? No, No you wouldn’t. Do that thought experiment with any media you love standing in for Star Wars and you will understand. 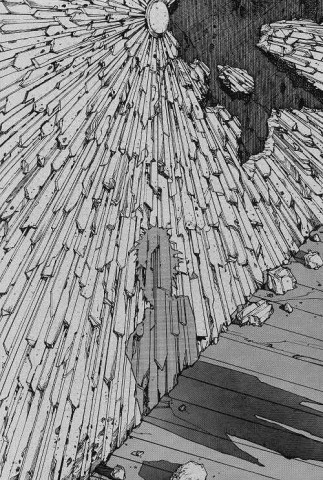 FINALLY: Please enjoy. Akira is a singular work with tons of “replay value” you can revisit it over and over again partially because it’s so long. You will want to lend the first volume to all your friends but just be sure to get it back… I’m looking at you Matt!!!