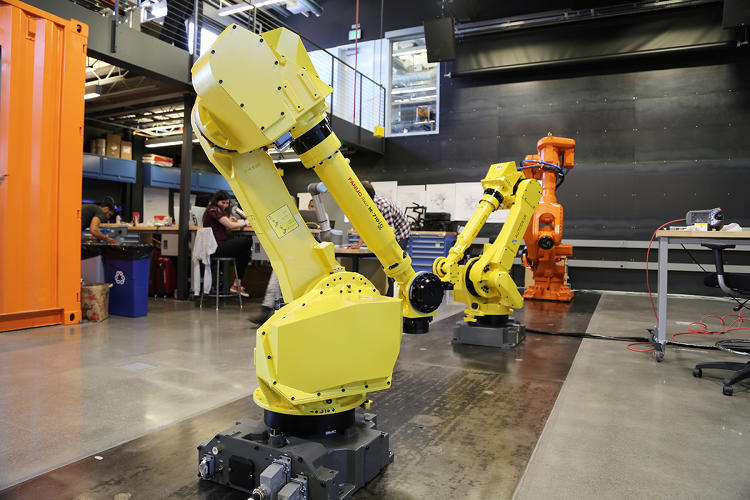 Fast Company has an exclusive look at Autodesk’s robotics lab of the future! Check out the full piece for photos and more.

In the middle of a tall, wide, two-story workspace with black walls and a conference room built inside an orange shipping container, three industrial robots are sitting idle.

Two of them are identical, yellow FANUCs, from Japan, the kind typically used in car manufacturing or for “pick-and-place” tasks. They’re called Castor and Pollux, after twin brothers from Greek and Roman mythology. Here, inside one of the many nearly identical maritime buildings that line San Francisco’s downtown waterfront, without a car to build or a warehouse full of items to pluck off shelves, they look a little out of place. As does their nearby cousin, an even bigger, orange, Swiss industrial robot from ABB that’s as yet unchristened, and a smaller device, a Universal Robotics UR10 called Bishop.

It’s also the home of Autodesk’s Applied Research Lab and, as Fast Company is the first to reveal, the company’s new Robotics Lab, which had been under wraps since February. Castor, Pollux, Bishop, and their Swiss cousin aren’t out of place at all.

With customers in nearly every major industry you can imagine, Autodesk was certainly well aware of how robots had become a mature business technology over the last several decades. It just hadn’t thought much about how robots will work in conjunction with software, and people, in the future. Their thinking changed about a year ago.

For Maurice Conti and his colleagues, the light-bulb moment came when they saw the technology behind the Oscar-winning special effects in Gravity.