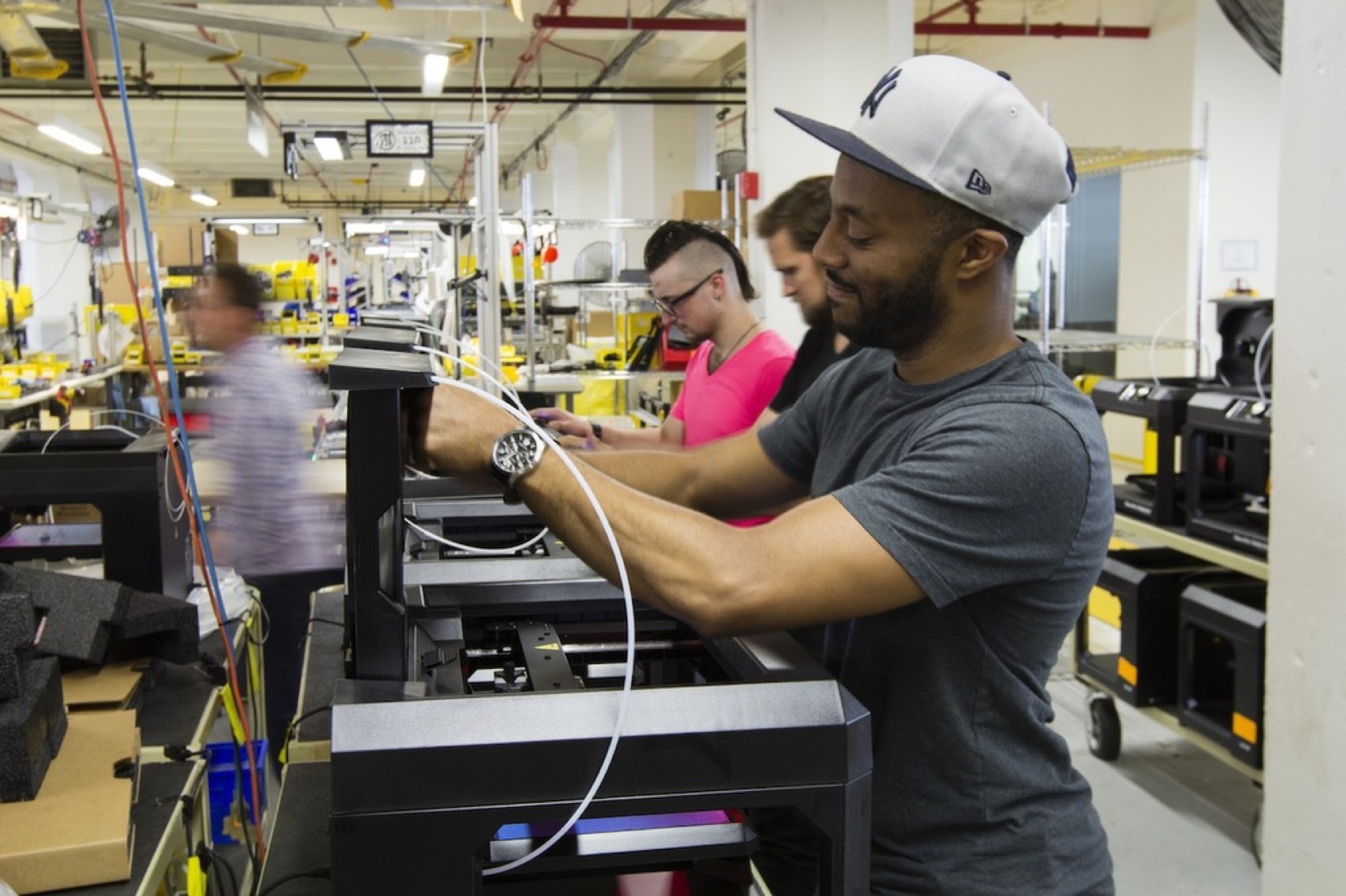 BROOKLYN, N.Y., July 22, 2015 – MakerBot, a global leader in the desktop 3D printing industry, today announced the opening of a new and larger factory at Industry City in Brooklyn, N.Y. The opening of the new factory reinforces MakerBot’s commitment to manufacturing in Brooklyn and is an important step in preparing the company for growth in the 3D printing market. The new facility measures 170,000 square feet, which doubles production capacity compared to MakerBot’s previous Industry City factory. A new layout streamlines the production process to help MakerBot advance its lean manufacturing methods and dedicate an even larger space to product testing.

“Since MakerBot was founded in 2009, we have been leading the desktop 3D printing revolution from Brooklyn and this has spearheaded a renaissance of manufacturing here. Brooklyn has defined what MakerBot is today and I couldn’t think of a better place for our new factory,” said Jonathan Jaglom, CEO of MakerBot. “The new MakerBot factory is a state-of-the-art facility with a focus on lean manufacturing and efficiency, making it one of the most advanced factories in New York City and in the global 3D printing industry. Close proximity to our R&D teams and corporate headquarters is a huge advantage as it allows us to adapt quickly to changes in the growing market of 3D printing.”

“The future has arrived, and its first stop is Brooklyn. We are witnessing the growth and evolution of 3D printing technology in our borough, a rapidly growing industry with infinite potential,” said Brooklyn Borough President Eric Adams. “MakerBot is bound to thrive in their new expanded factory at Industry City, innovating solutions to everyday real-world challenges in the marketplace while inspiring new opportunities for economic and technological development. I thank MakerBot and their development team for calling Brooklyn, the new Silicon Valley, their home.”

It was only six years ago that MakerBot started the desktop 3D printing revolution on Dean Street in Brooklyn. Since then, the company has grown significantly at three locations in Brooklyn and across three continents. MakerBot’s rapid growth led to several factory expansions, resulting in a suboptimal manufacturing space. The new factory streamlines the manufacturing process by bringing crucial functions, such as materials, production, product testing, and shipping, closer to one another. This consolidation allows MakerBot to advance its lean manufacturing practices that emphasize waste reduction and efficiency. MakerBot applies kanban, for example, which aligns inventory levels with consumption, as well as 5S, a workplace organization method.

Canalys, an industry research firm, forecasts that total 3D printing industry revenue will grow to more than $20 billion by the end of 2019. The larger factory prepares MakerBot for market growth by doubling its manufacturing capacity. It includes more space for product testing as part of MakerBot’s effort to create the industry’s largest Quality Assurance operation. The space also has a larger machine shop and 3D printing capabilities for both manufacturing and R&D. MakerBot uses its own 3D printers to create custom jigs and fixtures for the factory to streamline the production process, create better products and save time and money. The MakerBot factory employs 140 staff, including production, shipping, receiving, manufacturing engineering, quality engineering, supply chain and planning.

MakerBot® Replicator® 3D Printers are used by educators, engineers and designers to enhance education and transform the design process through Real-Time Prototyping™. MakerBot provides the most comprehensive 3D ecosystem in the desktop 3D printing industry to make 3D printing more accessible. The MakerBot 3D Ecosystem includes MakerBot Desktop software for preparing prints, the MakerBot Mobile app with cloud platform to initiate and monitor prints remotely, and MakerBot Thingiverse, the world’s largest 3D design community. The MakerBot Replicator Smart Extruder is a groundbreaking innovation that minimizes printing downtime by enabling users to swap a worn extruder in minutes. The Smart Extruder also allows users to adapt quickly to new innovations in the evolving world of 3D printing. When MakerBot introduces new materials like MakerBot Composite PLA, customers will be able to purchase a Smart Extruder made to handle the new filament, instead of having to buy an entirely new printer.

We have an Adafruit team member at the launch today, we’ll follow up with any photos and more soon.