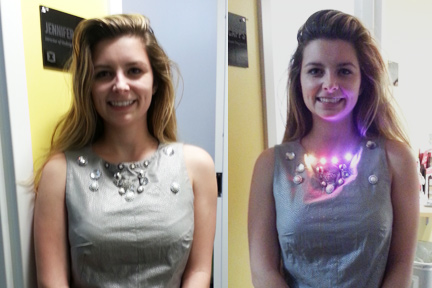 Victoria is a textile engineering student at NC State and she made this cute light up necklace dress using a FLORA and some NeoPixels. Nice work and thanks for sharing Victoria! Check out more info here.

Students with creative minds can make their dreams come to life with the help of the Albright Entrepreneurs Village (AEV). Victoria Rind, a junior studying textile engineering, demonstrated creative and entrepreneurial thinking with her e-textile dress design. The dress is simple but unique with its built-in, light-up necklace. Its purpose is to stand out.

“People want to be able to customize their style and clothing,” Rind said. “What’s more customizable than a programmable dress?”

The Village offered Rind exposure to the entrepreneurial environment of Raleigh. “It has given me confidence and resources to make me believe that in the near future, I can start my own business in E-textiles,” she said. “The Village has worked to connect me with people of similar interests.”

Rind first came up with the idea for the dress after seeing other dresses and shirts with built-in necklaces. She bought a simple shift dress pattern to make the dress and then purchased beads, the FLORA Arduino wearable microcontroller, 4 RGB NeoPixels and conductive thread. The FLORA works just like a normal microcontroller except, instead of wires, it uses conductive thread, and acts as the brain of the ‘circuit,’ controlling how each LED will change color and light up. The battery pack acts as the power source and the NeoPixels act as sensors, relaying information sent from the FLORA to the outside world. To control the output of the NeoPixels, the FLORA is programmed using the Arduino language—which is relatively simple.

“Arduino is a very successful platform for electronics prototyping that includes both hardware and software,” said Adam Rogers, Emerging Technology Services Librarian for NC State Libraries. It is open-source, and as such, many people and companies have modified and added to the platform, such as SparkFun, which makes the RedBoard, included in the SparkFun Inventor’s Kit that we loan out in the libraries.” Adafruit, a woman-owned tech company in New York, created FLORA, which is optimized for sewing and wearable projects like Rind’s project.

“Without the extra layer of thread, the lines of conductive thread would constantly touch, and the light pattern would be glitchy and inconsistent,” she said.

Rind was inspired through her work for Makerspace—a program within the NC State Libraries. Rogers worked with Rind at the Makerspace in the library and has her dress on display. “The NCSU Libraries’ Makerspace program gives NC State students and faculty access to emerging technologies for making, including 3D printing, 3D scanning, laser cutting, electronics and wearables,” he said. Rogers started the program in January 2013 by opening the Hunt Library Makerspace.

Rogers said Rind is talented and great to work with. “She’s creative, tech-savvy and a team player,” he said. “Seeing Victoria teach workshops at the library, I’ve really admired how she is able to help others learn these complex technologies by creating a fun, friendly environment where other students are unafraid and willing to take risks. I’m also impressed at her confidence and willingness to take on new projects and learning new tools.”

Rind recommends anyone who wants to be an entrepreneur or be in an environment fostering new ideas to join the Village. “My ultimate goal in five years is to bring functionality to textiles,” she said. “I would consider my work a success if I could create clothing that adapted to changes in the environment.” 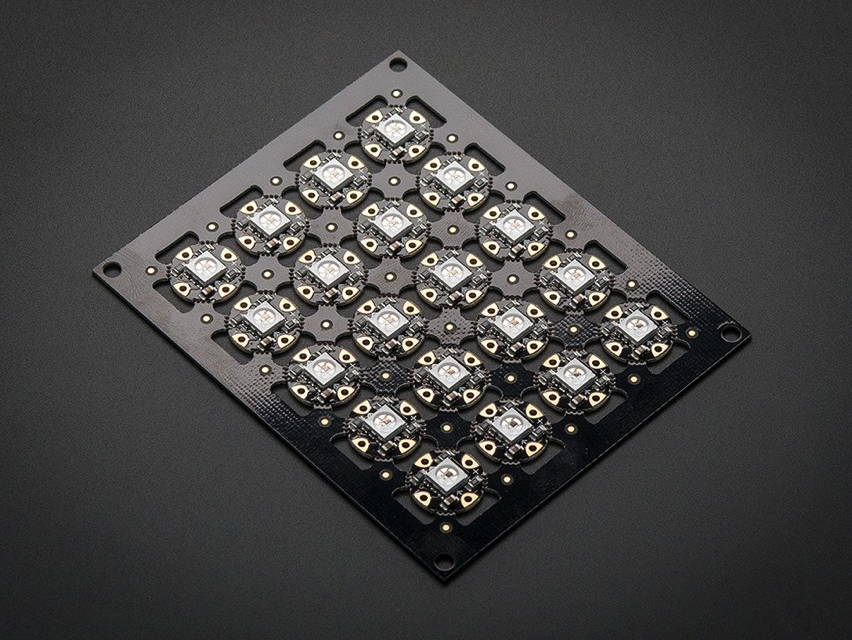 Comments Off on Light up necklace dress #WearableWednesday