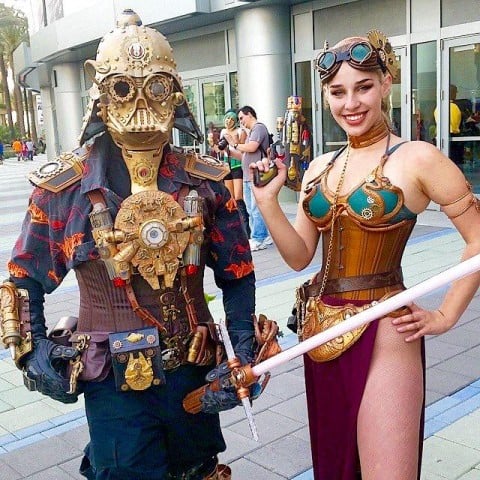 Characters from Star Wars are popular choices for cosplayers, and there are an endless number of ways to dress like denizens of the galaxy far, far away. You can go for a straightforward, screen accurate costume or opt for a mash-up. A cosplayer known as Dude Vader, or Christopher Canole, chose to put a steampunk spin on the Sith Lord and used an Aethertrooper Gladius corset from The Violet Vixen in the costume. Violet Vixen spoke to him about the ensemble, which as you can see, features a couple of Millennium Falcons prominently and a few other toys as well. Dude Vader said:

“I got the idea because young Anakin Skywalker used to hang out in the junkyards and so why wouldn’t he end up creating a costume out of junk? Since I see a lot of kids and they tend to be short, I like to add a lot of cool stuff to the knee pads in particular so they can really get the most out of the costume.”

Read more about his costuming at The Violet Vixen.

Comments Off on Steampunk Darth Vader