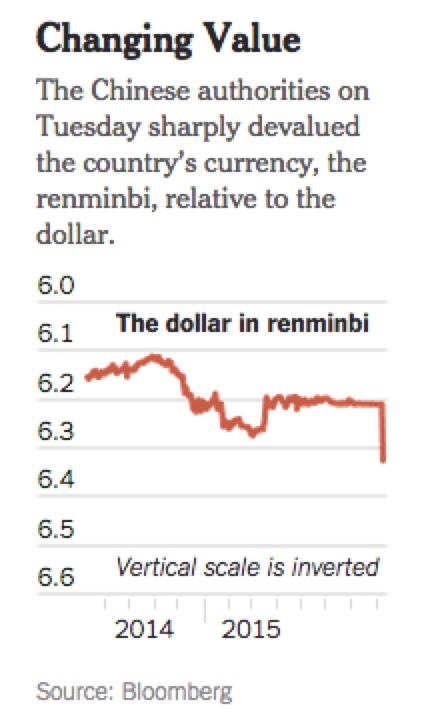 As China contends with an economic slowdown and a stock market slump, the authorities on Tuesday sharply devalued the country’s currency, the renminbi, a move that could raise geopolitical tensions and weigh on growth elsewhere.

The central bank set the official value of the renminbi nearly 2 percent weaker against the dollar. The devaluation is the largest since China’s modern exchange-rate system was introduced at the start of 1994.

China’s abrupt devaluation is the clearest sign yet of mounting concern in Beijing that the country could fall short of its goal of roughly 7 percent economic growth this year. Growth is faltering despite heavy pressure on state-owned banks to lend money readily to companies willing to invest in new factories and equipment, and despite a stepped-up tempo of government spending on high-speed rail lines and other infrastructure projects.

Many in Congress have long accused China of unfairly building up its manufacturing sector at the expense of American jobs by undervaluing the renminbi, and the Chinese devaluation could fan those criticisms.