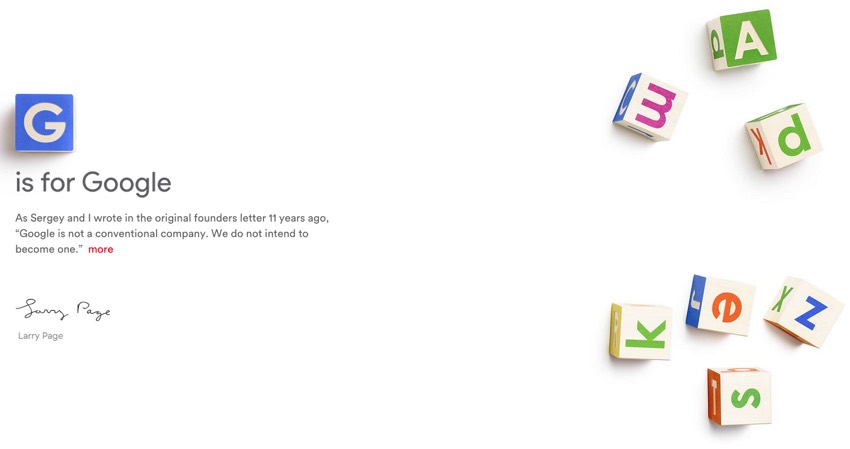 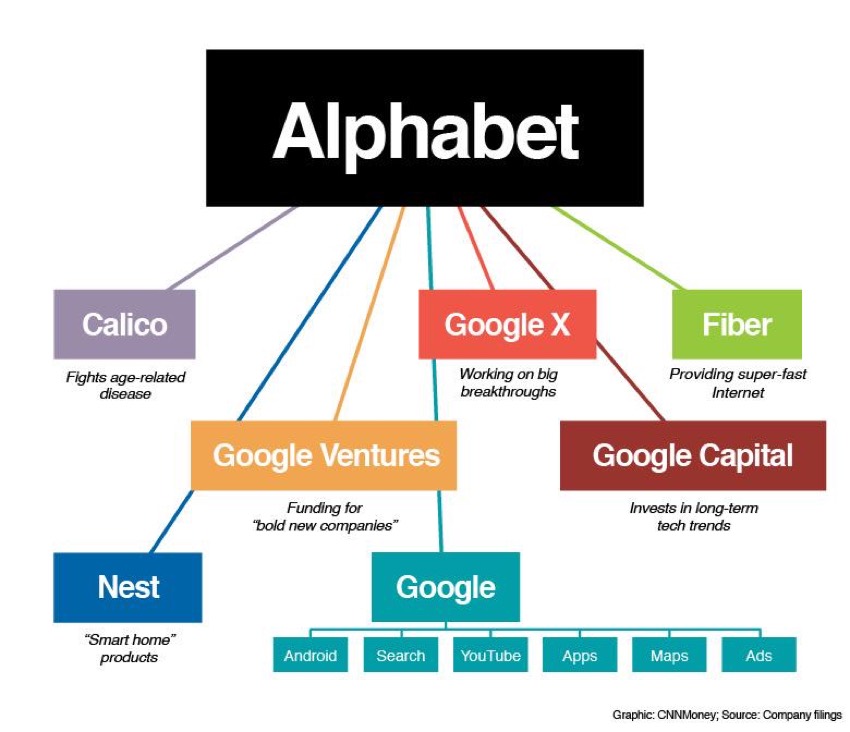 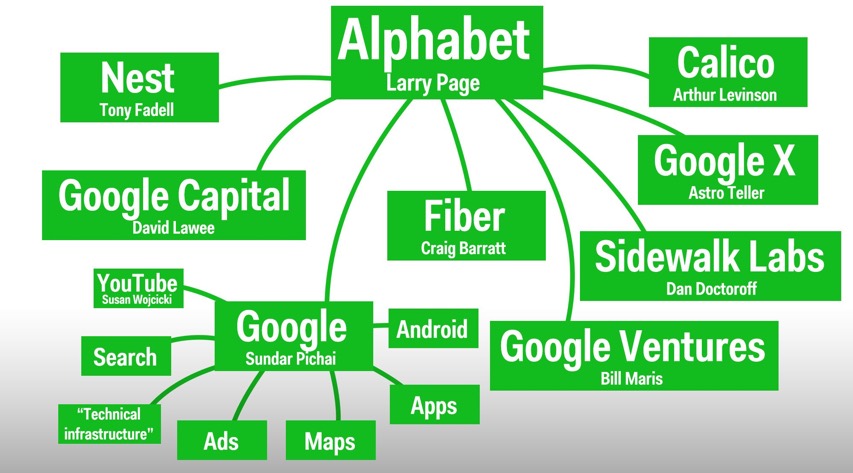 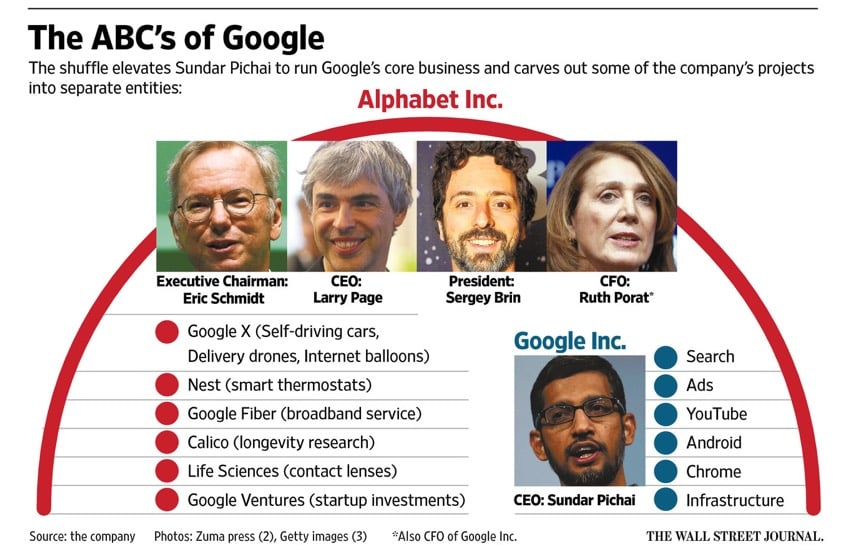 Google to Reorganize as Alphabet to Keep Its Lead as an Innovator – The New York Times.

Google’s reorganization into a holding company called Alphabet, a step to get a handle on its sprawl of businesses, is intended to let the divisions be nimble by giving them room to make their own decisions.
In extended-hours trading, the stock is ahead 6 percent, or more than $10 billion in value, an instant endorsement. Google’s co-founders, Larry Page and Sergey Brin, will run the umbrella company, while Sundar Pichai, 43, will lead the Google subsidiary.

Read more, blog post and visit Alphabet. Pictured above is a chart by Business Insider that gives a lay of the land’ and an addition one from the WSJ and another via twitter.

Here are the SEC filings for the motivated.

On August 10, 2015, Google Inc. (“Google”) announced plans to create a new public holding company, Alphabet Inc. (“Alphabet”), and a new operating structure to increase management scale and focus on its consolidated businesses.  Under the new operating structure, its main Google business will include search, ads, maps, apps, YouTube and Android and the related technical infrastructure (the “Google business”).  Businesses such as Calico, Nest, and Fiber, as well as its investing arms, such as Google Ventures and Google Capital, and incubator projects, such as Google X, will be managed separately from the Google business.

Concurrently upon completion of the Alphabet Merger, Sundar Pichai, age 43, will become the new CEO of Google Inc. Sundar is currently the Senior Vice President of Products at Google and oversees product management, engineering, and research efforts for Google’s products and platforms. Since joining Google in 2004, Sundar has led a number of key consumer products which are now used by hundreds of millions of people and, prior to his current role, served as Google’s SVP of Android, Chrome and Apps.

The Alphabet Merger will be conducted pursuant to Section 251(g) of the General Corporation Law of the State of Delaware, which provides for the formation of a holding company without a vote of the stockholders of the constituent corporations.  Effective upon the consummation of the Alphabet Merger, Alphabet will adopt an amended and restated certificate of incorporation and amended and restated bylaws that are identical to those of Google immediately prior to the consummation of the Alphabet Merger, except for the change of the name of the corporation as permitted by Section 251(g).  Furthermore, the conversion will occur automatically without an exchange of stock certificates.  Stock certificates previously representing shares of a class of Google stock will represent the same number of shares of the corresponding class of Alphabet stock after the Alphabet Merger. Following the consummation of the Alphabet Merger, shares of Class C Capital Stock and Class A Common Stock will continue to trade on the NASDAQ Global Select Market under the symbol “GOOG” and “GOOGL” respectively.  With respect to Alphabet stock, Larry, Sergey, Eric and their respective specified affiliated entities, as well as Alphabet, will be bound, without any modification, by the same restrictions, undertakings and obligations that are imposed under the Transfer Restriction Agreements, related Joinders and other documentation entered into in connection with the prior settlement of the litigation relating to Class C Capital Stock.

Wow, that’s tough to follow, subsidiary of a subsidiary then becomes/merges with, and becomes, the parent, eventually, that’s an interesting move.

What do we think? Some random notes as we digest … They’re separating the moneymaking businesses from the high risk “moonshots” – the hardware company, Nest, is on its own with Tony Fadell leading it. We think Boston Dynamics is still in google X? It will be interesting to see how much each units spends, loses, makes going forward since they’re separated out. From a high level, this seems like a way to have companies in the umbrella to compete with some of the interests google (alphabet) may have: Amazon AWS, Apple, Uber, Elon Musk… AND have more opportunities for multiple CEOs to lead the groups. On the other hand this could have been a proactive way to avoid being broken up in an anti-trust? Or just straight up slimming down after tons and tons of growth. It would have been interesting to see what would have happened if Microsoft did this back in the day as the internet was coming along, Xbox, mobile phones and more.

Here are all the google acquisitions and mergers.

Comments Off on Google to reorganize as Alphabet #Alphabet #makerbusiness @aIphabetinc