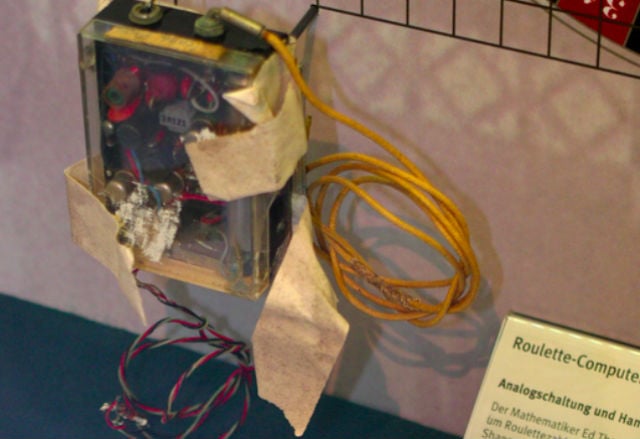 I’ve seen a few good documentaries about casino hustlers, not that I’m really interested in that stuff, but it is amazing to see the wiles and deception that go on. Anyway, my face lit up when I found this gem of a post on Gizmodo Australia about wearable computers for casino hacking. Check out what people have been sporting, starting with this photo of  a device to outfox a roulette table. No, it’s not a Raspberry Pi LOL. It was created by two math professors, Edward O. Thorp and Claude Shannon, back in 1961. This little beauty used switches attached to the toes of gamblers. Using the big toe, the switches would time the ball and rotor, while a computer would send a musical output to a speaker in the ear. Apparently they had to use a few people wearing these devices, so as not to attract attention with winning. Interestingly the wires for the earphones had to blend in with the skin, so they were attached with spirit gum, much like theatrical makeup. Although the experiment fared well, really the professors were just trying to prove the predictability of the roulette wheel. Neither of them was really chasing the money.

Meet Keith Taft–a Sunday school teacher with an interest in Blackjack and an engineering background to make a hack happen. On the left he’s wearing a 15 lb. card counting machine named “George”. This contraption really works with the upper body as a thin wire leads through the hair to the stylish glasses which contain LEDs. Those LEDs blink a pattern letting the gambler know whether to “stand” or “hit”.  Later Taft improved his design when he collaborated with another Blackjack player–Ken Uston. They worked out a deal and “George” became a more compact “David” according to this article in Sports Illustrated.

David, as in David vs. the casino Goliaths, is what Taft calls the space-age microcomputer and battery pack, each about the size of a deck of cards, that were hidden in pockets sewn into the high-waisted athletic supporter that he was wearing. All along, by using his big toes to manipulate a pair of switches that were connected to the computer by copper wires running down the insides of his pants legs, he had been “inputting” the value of each card as it was dealt. In turn, the computer, whirling through 100,000 calculations a second, “told” Taft the best possible play by means of a tapping device built into the instep of his left shoe.

Taft eventually involved his adult kids and got snagged by the FBI. So, David came to rest, but Taft continued to invent, creating the Belly Telly, a hidden camera device, as well as a wearable that relied on teeth to make an imprint. Although these ideas sound crazy, you can see how working in a box can force some pretty creative solutions. It’s this style of thinking that can help people living with physical challenges, too. What do you do when you can’t trigger a switch with a finger?  How can clothing and switches make life for older adults easier? Speaking of switches, I’ve been really interested in Flex Sensors. They were used in the famous Nintendo PowerGlove–think of fingers bending to trigger an action. What do you think you could do with one? Send us your ideas. 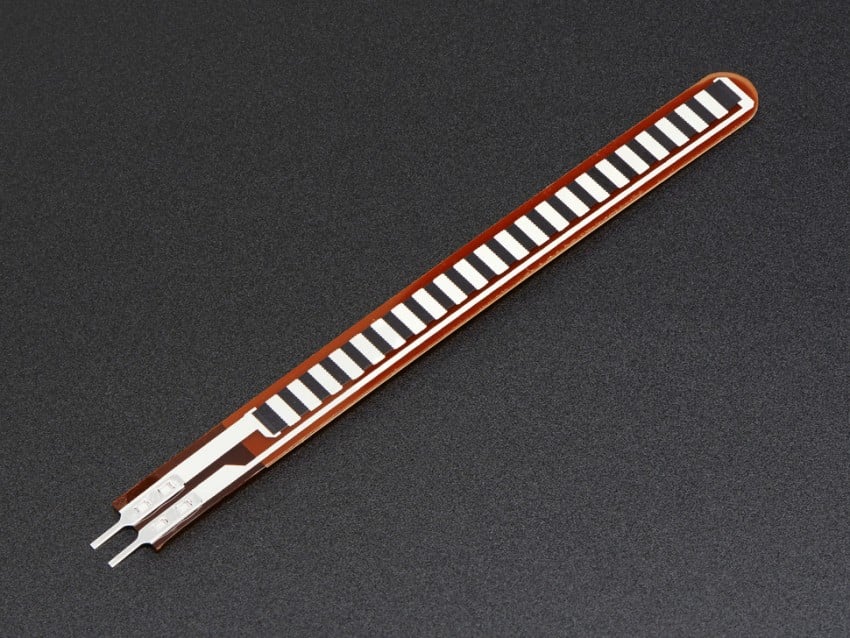 Comments Off on Casino Hackers Really Wore This Stuff #WearableWednesday