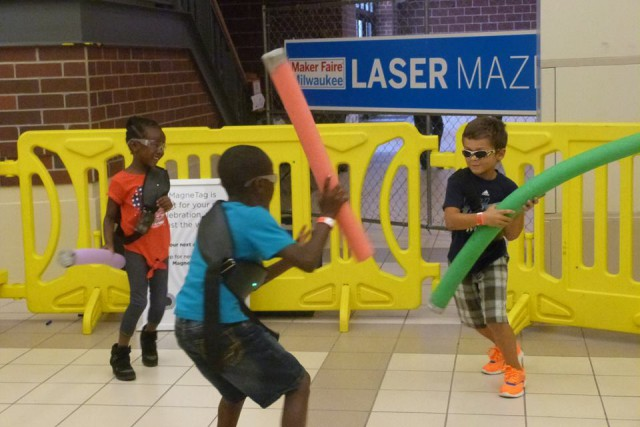 Thanks to Adam for sending in his great project! Check out more information here.

MagneTag is a project I started about four years ago, when I first joined Milwaukee Makerspace. My goal was to create an electronic scoring system for physical tag games. As a paintball enthusiast I really enjoy the action and tactical nature of the sport. I was looking for a method that wasn’t messy or painful and 100% reliable .

In order to accomplish this goal, I employed the mystical power of magnets. It’s a scientific fact that magnets are awesome. I knew that the invisible forces created by magnets could be used to create electrical signals, the technology has been around since Maxwell wrote down his famous equations of electromagnetism. So I set out to build a wearable system that could electronically detect magnets, be they in some projectile, or embedded in an a foam gladiator weapon, or whatever.

To an experienced engineer, this might not seem like a huge challenge, but when I embarked on this project I could barely operate an Arduino. I didn’t really understand what I was getting myself into. Now, I have an above average understanding of the principles of electromagnetism because I have a two degrees in physics, but in trying to make my idea a reality, I now understand that theory does not get you very far on its own. Making things is freakin’ hard, and you have fail many times before you begin to really understand how much you don’t know. When it comes to making, there is no substitute for experience. And I learned this the hard way, over and over again. Persistence removes resistance. In the end I succeeded and created something even better than I had imagined.

Milwaukee Makerspace is an awesome place. I’ve had so much help from some brilliant members, and the tools we have access to are invaluable. I even met my business partner Jason at MMS. Without this place, MagneTag would have just been a cool idea I had one time. It never would have become a real thing.

Comments Off on Project MagneTag: Electronic scoring for foam battles!