The first new mathematical tile in 30 years is discovered #math 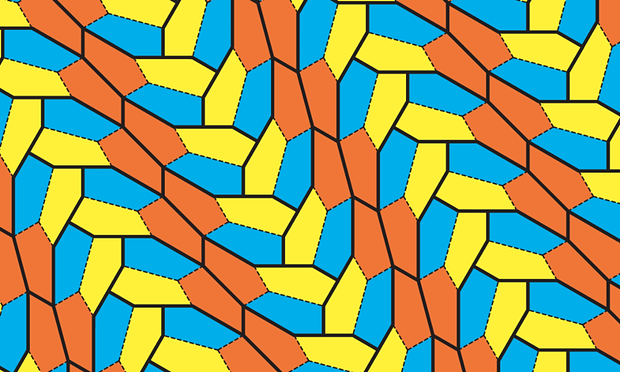 In the world of mathematical tiling, news doesn’t come bigger than this.

In the world of bathroom tiling – I bet they’re interested too.

If you can cover a flat surface using only identical copies of the same shape leaving neither gaps nor overlaps, then that shape is said to tile the plane.

The hunt to find and classify the pentagons that can tile the plane has been a century-long mathematical quest, begun by the German mathematician Karl Reinhardt, who in 1918 discovered five types of pentagon that do tile the plane.

(To clarify, he did not find five single pentagons. He discovered five classes of pentagon that can each be described by an equation. For the curious, the equations are here. And for further clarification, we are talking about convex pentagons, which are most people’s understanding of a pentagon in that every corner sticks out.)

Most people assumed Reinhardt had the complete list until half a century later in 1968 when R. B. Kershner found three more. Richard James brought the number of types of pentagonal tile up to nine in 1975.

That same year an unlikely mathematical pioneer entered the fray: Marjorie Rice, a San Diego housewife in her 50s, who had read about James’ discovery in Scientific American. An amateur mathematician, Rice developed her own notation and method and over the next few years discovered another four types of pentagon that tile the plane. In 1985 Rolf Stein found a fourteenth. Way to go!

But then the hunt went cold. Until last month, when Casey Mann, Jennifer McLoud and David Von Derau of the University of Washington Bothell announced last week that they had discovered this little beauty:

“We discovered the tile using using a computer to exhaustively search through a large but finite set of possibilities,” said Casey. “We were of course very excited and a bit surprised to find the new type of pentagon.

Pentagons remain the area of most mathematical interest when it comes to tilings since it is the only of the ‘-gons’ that is not yet totally understood.

As mentioned above, all triangles and quadrilaterals tile the plane. It was proved in 1963 that there are exactly three types of convex hexagon that tile the plane. And no convex heptagon, octagon, or anything else-gon tiles the plane. But full classification of the pentagons is still an open area of research.

“The problem of classifying convex pentagons that tile the plane is a beautiful mathematical problem that is simple enough to state so that children can understand it, yet the solution to the problem has eluded us for over 100 years,” said Casey. “The problem also has a rich history, connecting back to the 18th of David Hilbert’s famous 23 problems.”