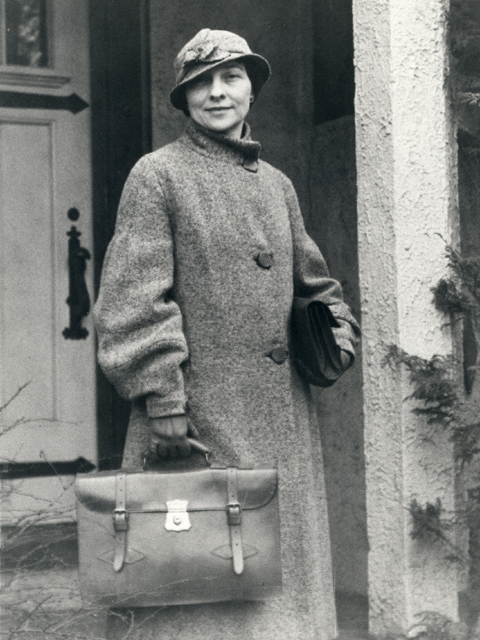 Elizebeth Smith Friedman was a cryptanalyst and author, and a pioneer in U.S. cryptography. She has been dubbed “America’s first female cryptanalyst”…

At Riverbank Laboratories Friedman found one of the first such facilities in the US to seriously study cryptography and other subjects. Through the work of the Friedmans, much historical information on secret writing was gathered. Until the World War I creation of MI8, the Army’s Cipher Bureau, Riverbank was the only facility in the US seriously capable of solving enciphered messages. Military cryptography had been officially deemphasized after the Civil War. During World War I, several US Government departments asked Riverbank Labs for help or sent personnel for training. Among those was Agnes Meyer Driscoll who came on behalf of the Navy.

Among the staff of fifteen at Riverbank was the man Elizebeth would marry in May 1917: William F. Friedman. The couple worked together for the next four years or so in the only significant cryptographic facility in the country, save Herbert Yardley’s ‘Black Chamber’. In 1921 Mr. and Mrs. Friedman left Riverbank to work for the War Department in Washington, D.C.

Mrs. Friedman’s employment as a cryptanalyst for the U.S. Navy followed in 1923, which led to her subsequent positions with the U.S. Treasury Department’s Bureaux of Prohibition and of Customs. Her career at both is quite significant and embraces cryptography against international smuggling and drug running in various parts of the world. The smugglers and runners resorted to encrypted radio messages to support their operations, presuming they would be able to communicate securely. This became a mistaken notion after Mrs. Friedman came to Washington.

The Volstead Act of 1919 forbade the manufacture, sale, import, or export of intoxicating liquors. Prevailing conditions during those days, however, encouraged illegal activity. Further, as radio equipment became less cumbersome, less conspicuous, and more sophisticated, it afforded the criminal element another means to circumvent the law. To avoid taxes, etc., criminals smuggled liquor and, to a lesser degree, narcotics, perfume, jewels, and even pinto beans. Related enciphered communications were passed by persistent anti-prohibitionists to protect their operations.

Anti-prohibitionists provided Mrs. Friedman and her team of cryptanalysts with innumerable opportunities to hone their cryptanalytic/codebreaking skills during her employment with the U.S. Treasury Department. She led the cryptanalytic effort against international smuggling and drug-running radio and encoded messages, which the runners began to use extensively to conduct their operations. Even though early codes and ciphers were very basic, their subsequent increase in complexity and resistance to solution was important to the financial success and growth of their operations. The extent of sophistication seemed to pose little problem for Mrs. Friedman; she still mounted successful attacks against both simple substitution and transposition ciphers, and the more complex enciphered codes which eventually came into use. While working for the Coast Guard and the Bureau of Foreign Control during the Prohibition era, she solved over 12,000 rum-runners’ messages.

Mrs. Friedman also perceived the need for a more dedicated effort against suspected communications. By 1931 she had convinced Congress of the need to create a headquartered, seven-man cryptanalytic section for this purpose. As her cryptanalytic responsibilities began to mount, Mrs. Friedman sensed the need to teach other analysts cryptanalytic fundamentals, including deciphering techniques. By relieving her of a part of the burden, this allowed her time to attack the more atypical new systems as they cropped up and expedited the entire process from initial analysis through to solution. It also allowed her to stay one step ahead of the smugglers.