@Zac_Posen and @MadeWithCode team up for #NYFW with a stunning light up dress modeled by @cocorocha featuring Adafruit FLORA and more! #DressedInCode 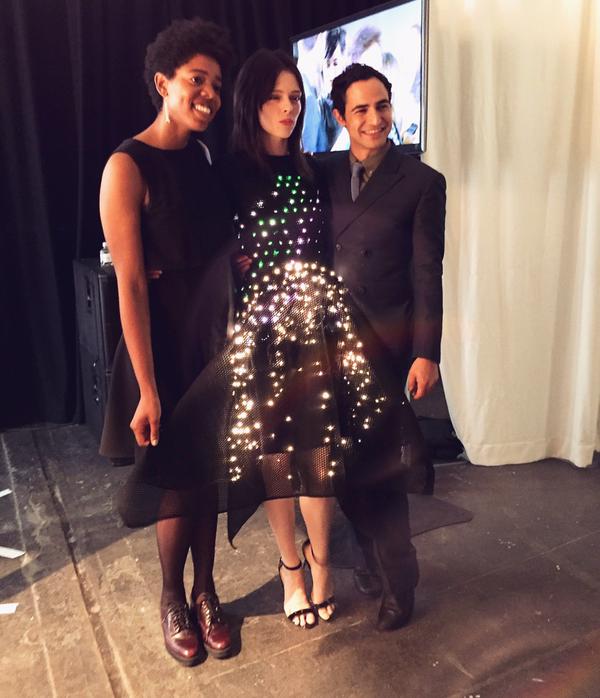 New York Fashion week has taken over the city and kicking it off was Zac Posen who partnered with Google’s Made with Code program to make a stunning LED dress made with Adafruit parts!

Maddy Maxey teamed up with Posen on the dress which featured around 300 LEDs and an Adafruit FLORA. Becky and I spotted the first lady of NYC Chirlane McCray admiring the dress as well!

A great aspect of the show was that they allowed teen girls to go online and code the dress as it was shown on the runway.

As part of the Spring 2016 collection, ZAC Zac Posen has partnered with Google to create an LED dress in collaboration with the Made with Code initiative. The dress, in et-black crepe with a honeycomb mesh overlay moves with the LED light and changes as the teen coders play with millions of possibilities of patterns. This dress depicts a night aerial view of the City of Angels, with its myriad of lights against a dark and quiet backdrop.

Read more about the dress and play around with code on the Made with Code website! And be sure to check out Phil’s excellent coverage of the event as well.

Comments Off on @Zac_Posen and @MadeWithCode team up for #NYFW with a stunning light up dress modeled by @cocorocha featuring Adafruit FLORA and more! #DressedInCode