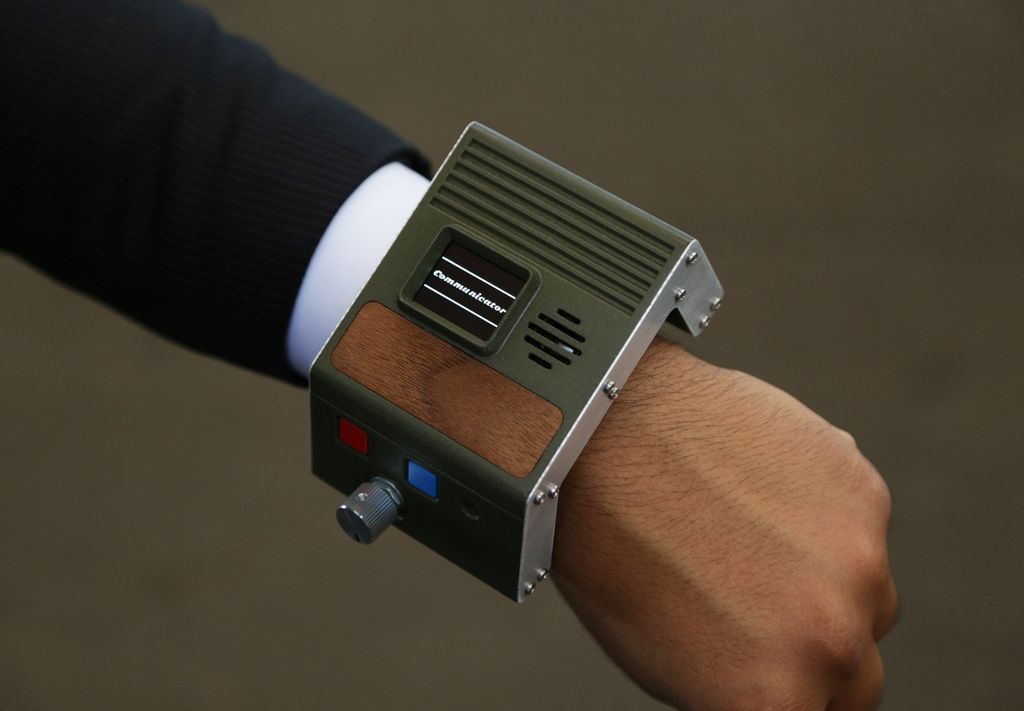 DJ Harrigan wrote in to share his tutorial for a very handsome Communicator Watch on Instructables, inspired by Venture Bros., Fallout’s PipBoy, Star Trek, and more:

Teeny tiny communication devices that you can pin to your chest, strap to your arm, or pop into your ear have long been a sci-fi trope. While wrist-worn “two-way radios” have mostly either been toys or the result of movie magic, we’ve finally reached the point where it’s possible to actually build wearable technology that functions how people have envisioned for decades. Thanks to the amazing open-source hardware community, the technology to build advanced, connected devices is cheaper and easier than ever before! In this Instructable, I’ll show you how I designed and built my very own communicator watch that not only keeps the time, but allows me to make and receive phone calls from my wrist!

The Teensy 3.1 is my go to board for microcontroller projects. They’re fast (72 MHz+), inexpensive (~$20), and (by embedded standards) have oodles of memory (256K ROM, 64K SRAM). The 3.1 has a built-in RTC which makes time keeping a breeze. The only needed accessories are a 32.768 KHz crystal and a 3V battery backup to keep time.

I chose to design the interface around two momentary push buttons and a rotary encoder (with built-in switch) and a single slide SPDT switch. The slide switch directly controls power from the LiPo battery. Although I could have easily designed around just the encoder for the UI, scrolling and confirming for every single interaction takes time and can become tedious, plus I wanted to have the red and blue buttons a la the Venture Bros style communicators.

The heart of the system is a SIMCOM-800 chip, which mounted on Adafruit’s FONA breakout board. Short from designing my own PCB, the FONA is one of the most compact GSM breakout boards available, which is good for keeping things slim. The FONA is basically an all-in-one cellphone module, requiring only the minimum connections of a battery, speaker, microphone, and a host controller. I opted to attach a wee vibration motor as well for additional notification goodness.

I chose to use a 1.27″ 128×96 pixel OLED screen as the main display. I went with this module for many reasons: 128×96 is a 4:3 aspect ratio, which is a classic design, it draws minimal current, has razor sharp contrast, includes a microSD card slot on the back.

The system is powered by a 2000mAh LiPo battery, which is extraordinarily large for a wearable device (most are in the sub 500mAh range), but since this is essentially a cell phone, I wanted to have a realistic battery life of at least 8 hours. The battery is connected directly to the FONA module and the rest of the system is powered via a 5V step-up regulator that boosts the 3.7V source from the module’s VBAT pin. The power switch is located at the front edge of the control plate.

Comments Off on Communicator Watch Takes Calls with FONA #WearableWednesday