Tuesday October 13th is Ada Lovelace Day – Check out events in your area or organize your own! #ALD15 @findingada #WomenInSTEM 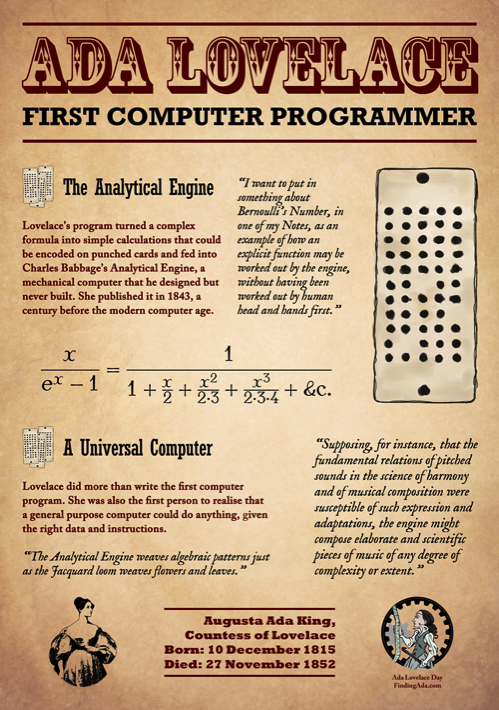 Ada Lovelace Day 2015 is just around the corner and Adafruit is gearing up for 24 hours of posts on our blog! We are also an official sponsor of the day. There are lots of events happening around the world to celebrate as this year marks Ada Lovelace’s 200th birthday.

If you would like to submit an event for your area please go here.

To view upcoming events around the world go here.

To get more information on organizing your own event go here.

Check out the community page here to discuss ideas, ask for help, and take a look at what others are doing.

If you would like to become a patron please go here.

Ada Lovelace Day is an international celebration of the achievements of women in science, technology, engineering and maths (STEM).

This year, our our annual flagship event is being hosted by the Conway Hall Ethical Society at Conway Hall, Holborn, on the evening of 13 October. Confirmed speakers include Mars Rover engineer Abigail Hutty, astrophysicist and science communicator Dr Jen Gupta, nanochemist Dr Suze Kundu, our very own Suw Charman-Anderson. Our compère again this year is the inimitable Helen Arney. Tickets cost £20 (general entry), £5 (concessions), and are available now!

We are also delighted to say that we are this year able to offer free tickets to school and youth groups (12+ years old), as well as families and individuals, for whom the cost of the event would otherwise be prohibitive. We are grateful to Slack, the messaging app for teams, for their support in making this happen.

There are still some sponsorship packages for 2015 are available, so please take a look. We have packages for companies of all sizes, covering our event, our website and special projects. We are also able to tailor packages to sponsors’ specific needs. If you’re interested in supporting women in STEM, please get in touch!

If you are organising your own independent ALD event this year, you can let us know via this form, and we’ll add it to our site. And if you’re looking for an event near you, take a look at our handy map!

There’s still plenty of time to get your event organised, but if you want to get some ideas, download our handy organisers’ pack for inspiration, advice and resources. You can also chat to other organisers about what they are doing on our community forum!

Every year we encourage you to take part, no matter where you are, by writing something about a woman, or women, in STEM whose achievements you admire. You can browse our list of posts from 2014 to see who has inspired other people!

You can now buy Ada Lovelace posters, prints, greetings cards, and notebooks from our RedBubble shop!

All profits go to supporting Ada Lovelace Day, and we’ll be adding to our range there over coming months.

A Passion for Science

From the identification of the Horsehead Nebula to the creation of the computer program, from the development of in vitro fertilisation to the detection of pulsars, A Passion for Science: Stories of Discovery and Invention brings together inspiring stories of how we achieved some of the most important breakthroughs in science and technology. Read our sample chapters.

From Kiribati to Howland Island

In the middle of the Pacific Ocean, on Kiritimati Island, Ada Lovelace Day begins. Also known as Christmas Island, the coral atoll is situated in the Line Islands and is a part of the Republic of Kiribati. It lies 14 hours ahead of GMT/UTC, and 13 hours ahead of British Summer Time.

It continues for a mindbending 50 hours, until midnight on Baker Island and Howland Island, two uninhabited atolls which are actually further west than Kiritimati Island but which sit on the other side of the International Date Line. Both islands are 12 hours behind GMT/UTC, or 13 hours behind BST.

With 50 hours to play with, you will have plenty of time to get something written, published and into our collection! (Hint: You can actually add your story at any time, we’re not that strict!)

Ada Lovelace Day in a nutshell

Ada Lovelace Day is about sharing stories of women — whether engineers, scientists, technologists or mathematicians — who have inspired you to become who you are today. The aim is to create new role models for girls and women in these male-dominated fields by raising the profile of other women in STEM.

People often ask why Ada Lovelace Day is the day that it is. The explanation is rather mundane: the date is arbitrary, chosen in an attempt to make the day maximally convenient for the most number of people. We have tried to avoid major public holidays, school holidays, exam season, and times of the year when people might be hibernating.

Why not just used Ada’s birthday? Well, Ada was born on 10 December and, in the UK where Ada Lovelace Day is based, December is swamped by Christmas parties, making venue hire tricky and putting us in competition with traditionally unmissable employee booze-ups. Given her tragically early death at just 36, it would feel inappropriate to celebrate her deathday on 27 November.

Read more on the finding ada site and check out our previous year’s coverage of the day here.

Comments Off on Tuesday October 13th is Ada Lovelace Day – Check out events in your area or organize your own! #ALD15 @findingada #WomenInSTEM