A new edition of Adafruit’s comic reading list — this week it’s Peanuts by Charles M. Schulz, recommended by Zay, who says “Good Grief!” whenever he makes a shipping error!

Nobody can steal your childhood, even if you might want them to. So when folks get all up in arms because “Hollywood is stealing my childhood” or “George Lucas destroyed my youth” or “Female Ghostbusters? That’s an affront to my whole generation!” you can just nod and maybe say something nice, because they’re lost in some irreparable way.

This is something I have to remind myself when I see things like this: 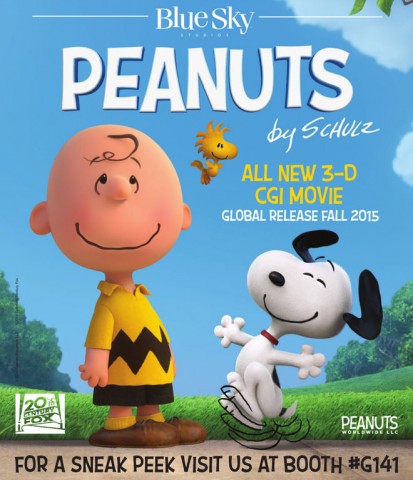 Peanuts was my first comic love. It was therapeutic for me. The Charlie Brown holiday special only scratches the surface.

In 1947 Charles M. Schulz started a strip called Li’l Folks. It was about the relationship between little kids and the big world, drawing its humor from kids behaving like adults.

But in 1950 the strip’s name was changed to Peanuts. Charles M. Schulz famously hated the name, but that didn’t stop him from transforming his cutsie proto-Family Circus into something much, much stranger. Gone were all adults and all the cutesy kids playing house, and in walks this kid named Charlie Brown.

Is it funny? Sort of. But in a sad and strange sort of way.

There’s a powerful irony at work whenever Charles M. Schulz uses the phrase “Good ol’ Charlie Brown,” and you can see it in action here. It’s an irony that gives Peanuts strips an existential and depressive feel that no popular comic strip has ever even come close to matching, even in the world of contemporary web comics, and it all starts with Charlie Brown.

Charlie Brown is far from the heroes or even the anti-heroes of other comic strips or comic books. He’s not funny or witty. He’s not that good of a friend. He’s self-involved. He’s not athletic or smart. His likability stems from his earnest nature and endearing sadness. But the most important thing about Charlie Brown is his depression. 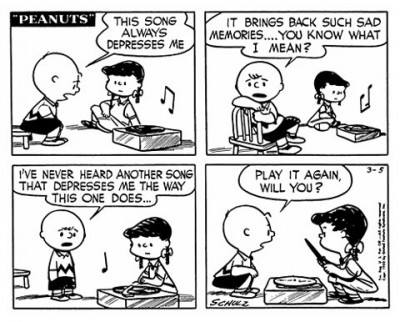 I know it’s sounds strange, but I learned the word “depression” from Charlie Brown. Stranger still, his experiences helped define something that had been unnamable, scary, and alienating.

There is in Schulz’s depiction of Charlie Brown’s depression a level of nuance that brings a startling recognition for many who struggle with depression. Why, for instance, does Charlie Brown assume the famous head down sad walk pose when he’s particularly bummed out? 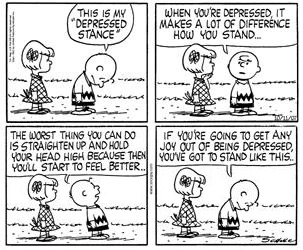 Again, there’s a kind of funny in the punchline of that strip — but it’s not a laugh out loud funny. It’s a surprising ironic twist that articulates a central truth about depression. A lot of the time that’s what Peanuts punchlines are all about.

But Peanuts isn’t all about moping around. Charles M. Schulz has a much more compelling picture of life than that. Like Snoopy.

Snoopy’s uses the power of imagination for fun and freedom. To Charlie Brown life and friends and love are just another opportunity for struggle and failure. To Snoopy his dog house is a fighter plane.

For Snoopy there is no failure, because for Snoopy struggle is fun. And if you’ve struggled all day, even if it’s only in your imagination, then the evening is time to dance the dance of joy.

Snoopy represents vitality, the true opposite of depression. 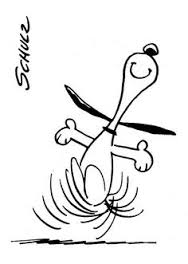 These thematic dyads are everywhere in Peanuts. Linus is the philosopher.

While Lucy is the explosive id.

What’s fun — and thereapeutic — about Peanuts is the interplay of all of these different approaches to life. Lucy can be terribly mean, but if Charlie Brown could learn her lessons he’d probably be much happier. 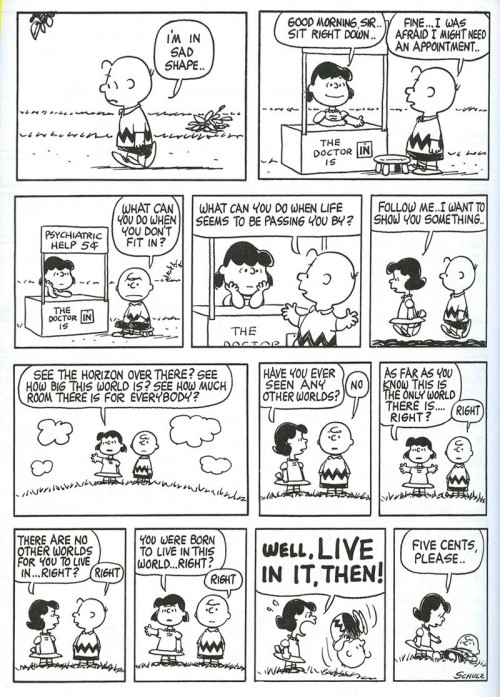 If you want to revisit an American classic and truly unique piece of pop art, and take a journey through the psyche that is full of rich ironies, Peanuts can be endlessly rewarding.

Every strip available online, in chronological order, for free.

Check out our previous posts Bee and the Puppycat, Spacetrawler, Grrl Power, Krazy Kat, She-Hulk, King City, The Whiteboard, Hubris, Akira, The Wicked and the Divine, Saga, Are  You My Mother?, Cairo,  Static, Elfquest, Hip Hop Family Tree, and Finder!