It’s the eve of the equinox. Fall aromas fill the air, pumpkin spice everything is on store shelves, and Halloween projects are afoot at Adafruit.

Previously we saw Erin St Blaine’s ideas for a costume based on the Wasp character of the Avengers comics and films. She’s been working on wings lately…

At first I went to the local Ace Hardware and picked up a sheet of very thin, lightweight aluminum to experiment on. I based the wing vein design on an actual wasp wing, with a strong frame piece along the top and lots of elegant veins inside. I cut a template from foam core and started experimenting with the metal.

This first sheet of metal was so thin that I thought cutting it with metal shears might work well. This was HARD. The shears left lots of jagged edges and bent the metal every which way, giving me a wiggly jagged edge that.. well, wasn’t quite what I was looking for. Next I tried a saber saw with a metal cutting blade, and while that worked a little bit better, the unsupported narrow wing veins still twisted and bucked all about and I ended up with a floppy wing frame that looked a bit like it’d been run over by a truck.

Ok, I needed thicker metal. I found some 2mm aluminum sheet and brought that home to give it a go. There’s no way the shears would work on this stuff , so I went right for the saber saw. It cut the metal all right — this was definitely better than the thin stuff, but the finished wing frame was all covered in deep scratches from the saw, and the finished wing was just sort of stiff and lifeless, and quite a bit heavier than I wanted.

One more trip to the sheet metal store and I came back with a piece of 040 thickness (about 1mm). Since I was afraid it would warp and twist the way the other thin stuff had done, I sandwiched it between two pieces of plywood for support (and scratch protection) and cut through all 3 layers at once.

Success! This wing frame is perfect. It’s light and flexible, while being stiff enough to maintain its shape and structure. 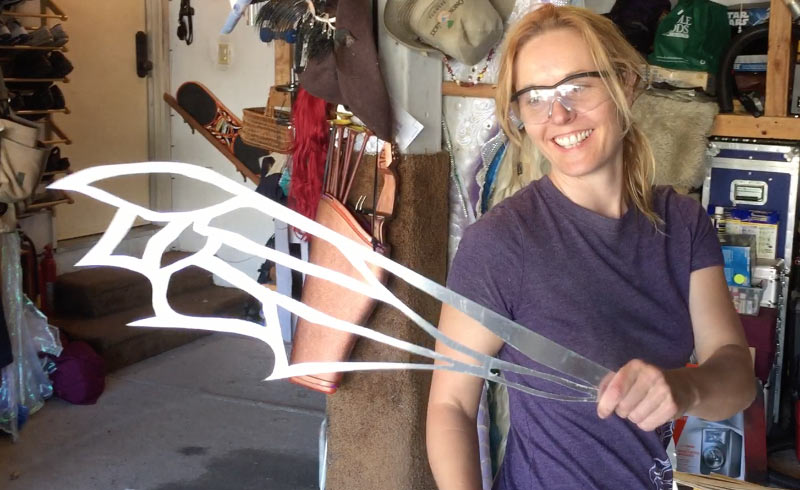 I’ve been tasked with making Erin’s wings move, so there’s going to be servos and a backpack of some sort. While she’s been kicking butt and taking names, I’m falling a bit behind while distracted with other Halloween things…there was the Uncanny Eyes project a couple weeks ago, then more recently I’ve been collaborating with Becky Stern on a Halloween wearable project…for her dog. 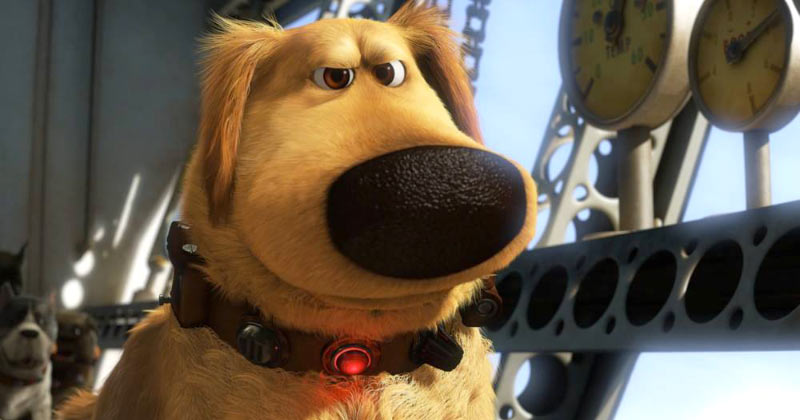 Remember the translator dog collars from the Pixar movie Up? Basically that, using the Adafruit Audio FX Sound Board and triggered via Bluetooth from a smartphone or tablet. Funny thing is, I’ve actually kinda built this project before…

That was stone-age technology by comparison. Because it was designed to be worn by a person in a big stuffy dog costume, that collar was huge and there was ample space for electronics. This time around, the collar is actual dog-sized…so about half the dimensions as before…but remember, scaling by one half means the volume is one eighth. This could be tricky…

HAPPY HALLOWEEN! Every day this month we’ll be bringing you ideas and projects for an Electronic Halloween! Expect wearables, hacks & mods, costumes and more here on the Adafruit blog! Working on a project for Halloween this year? Share it with us on Google+, in the comments below, the Adafruit forums, Facebook, or Twitter— we’d love to see what you’re up to and share it with the world (tag your posts #ElectronicHalloween). You can also send us a blog tip! Tune in to our live shows, Wearable Electronics with Becky Stern, 3D hangouts with Noe and Pedro, and Ask an Engineer, featuring store discount codes, ideas for projects, costumes, decorations, and more!

Comments Off on #ElectronicHalloween 2015 at Adafruit – 9/22 Update