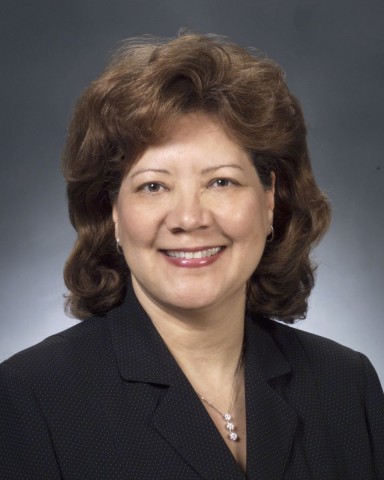 In 1979, González-Sanabria began her NASA career as chief of its Glenn Research Center’s Plans and Programs Office and executive officer to the Center’s Director. During her career González-Sanabria also served as Director of the Systems Management Office.

González-Sanabria played an instrumental role in the power systems area with the development of the “Long Cycle-Life Nickel-Hydrogen Batteries.” Her technical contributions helped to enable the International Space Station power system. She was awarded an R&D 100 Award in recognition of this effort.
In 2002, González-Sanabria was appointed to Senior Rank and named director of the Systems Management Office at NASA’s Glenn Research Center, thus becoming the highest ranking Hispanic at NASA Glenn. She was also named a member of the U.S. government’s Senior Executive Service.

González-Sanabria was featured together with her husband, Rafael Sanabria, as “NASA Glenn’s Dynamic Duo” in the Hispanic Engineer National Achievement Awards Conference (HENNAC) Technical magazine’s (Winter 2004 edition) cover story. She, also holds a patent and has authored/co-authored over 30 technical reports and presentations for journals and conferences.

On October 7, 2003, González-Sanabria was inducted into the Ohio Women’s Hall of Fame under the category “scientist, inventor and executive.” She joined other notable inductees such as Gloria Steinem, Maya Lin, Doris Day, and Elizabeth Blackwell.

Among the many awards which NASA has bestowed upon her are the following The NASA Medal for Outstanding Leadership (2002) and the NASA Exceptional Service Medal (1993). She also received the Women of Color in Technology Career Achievement Award (2000), and an R&D 100 Award (1988).

In 2007, HENAAC  announced HENAAC Award Winners in Engineering & Science. According to HENNAC the winners in each category represent the nation’s best and brightest engineers and scientists. They were selected by the HENAAC Selection Committee, an independent group of representatives from industry, government, military and academia. González-Sanabria was recognized under the category “Executive Excellence”.