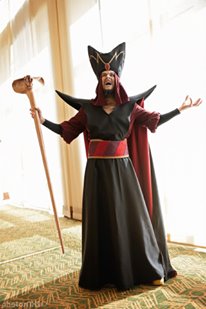 Cosplayer Roland’s Forge, also known as Chris, caught my attention with his Jafar costume. I have a soft spot for all things Aladdin, and his take on the Disney villain was perfect. He makes costumes as a hobby but also to expand his portfolio — he’s a prop artist and the skills used for cosplay definitely tie into that. I talked with him about his cosplay history, the new techniques he’s learned because of cosplay, his cosplay wish list, and more.

Roland’s Forge: I have been cosplaying now for about six years. I started making my first cosplay in the summer of 2009, and wore it to my first convention in early 2010. As for why I started cosplaying, I honestly can’t remember what exactly spurred me to delve into the hobby. I believe it largely had to do with my friends, who were getting back into cosplay at the time after a college induced hiatus. I have always enjoyed making things, such as plastic model kits in high school, so scratch building a project seemed like the logical next step.

Adafruit: What has been your favorite material you’ve worked with and why?

Roland’s Forge: In general, my favorite materials to work with are probably clay and wood. They are both rather forgiving and versatile materials. My preference for clay is an oil clay of medium hardness. Oil clay can be sculpted into any number of forms and then cast. Once cast, the clay can then be re-sculpted and cast over and over, giving it unsurpassed longevity as a building material. Wood, while not as forgiving as clay, is still a very accessible materiel in and of itself. It can be worked with using a vast number of tools, both hand and power. And while wood can be cast into different materials like clay, it also has the advantage of the fact that it itself can be crafted directly into the final product, bypassing the mold making and casting process entirely. 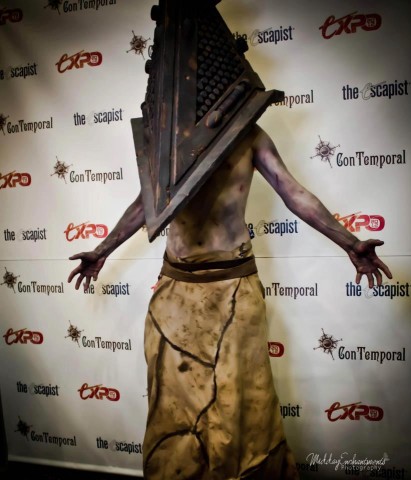 Adafruit: Your Pyramid Head cosplay looks amazing (and also scary). What sort of materials did you use to craft that costume and how did you weather it?

Roland’s Forge: Thank you, it always means a lot when my cosplays successfully frighten people. Interestingly enough, Pyramid Head was my first cosplay, so I didn’t have the best knowledge of materials, nor did I have much of a budget when I made it. The helmet itself is made of your everyday foam core board and various bits of PVC and wood. While not the most durable material, the board is very light weight making the helmet feasible to actually wear. I physically weathered it using various cutting and shaping bits on my Dremel, and the visual weathering was done by studying the textures and colors of rusted iron and then applying that to the final paint job. The Great Knife was cut out of a 6’x10″x.75″ piece of plywood with a jigsaw and then shaped using a belt sander. The handle was shaped out of a separate piece of wood also with a belt sander, then stained and attached. I used similar techniques weathering the Knife as I did the helmet. The skirt was sewn out of faux leather that was stained and painted. The makeup, I didn’t quite get the hang of until a few years later. It was largely thanks to my friend, fellow cosplayer, and makeup master Donttouchmymilk Cosplay that I learned how to use special effects makeup. Someday I hope to remake the helmet and Great Knife with stronger materials such as cast resin. I would also love to make a foam latex body suit like the one used in the Silent Hill movie.

Adafruit: Have you had to learn any new skills because of cosplay. If so, which ones?

Roland’s Forge: So, so many actually. I changed my major to sculpture about the same time I started cosplaying, so I was learning new techniques concurrently from both. It was quite helpful being able to take what I learned from one and apply it the other, creating a synergistic learning experience. 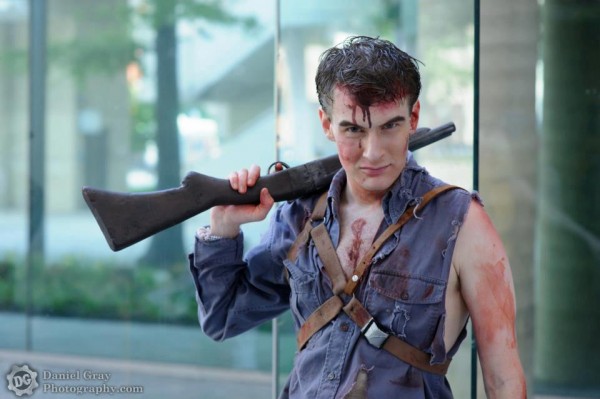 Adafruit: Which costumes are on your cosplay dream list?

Roland’s Forge: Well, generally I’m always working on something I would consider a dream cosplay (I have quite a few), but there are some cosplays I can’t make yet that I suppose you could call dream cosplays. Most of these I need equipment I don’t yet have before I can make them, such as a large format vacuum former or a foam latex oven. Tengen Toppa Gurren Lagann (yes, the galaxy-sized robot) from the show of the same name, Escaflowne from the show of the same name, and a Mondoshawan from The Fifth Element are just a few that come to mind; basically a lot of aliens and giant robots.

Adafruit: What advice would you offer those interested in trying cosplay for the first time?

Roland’s Forge: Since I thrift or commission most of the cloth aspects of my cosplays, I can only really give advice in the way of prop making. As far as that’s concerned, I suppose the best piece of advice I could give is that prop making is equal parts research and experimentation. Before starting a project, always research your materials, tools, and methods. There are a wealth of forums, tutorials, and videos online to help you learn. That being said, never be afraid to (safely) experiment upon and refine what you already know. There is always something new to learn. Also, I know it’s cliche, but safety first! When it comes to prop making there are a lot of hazards, whether it be from chemicals or power tools. Always know the correct procedures and safety gear to use with each tool or activity.

Comments Off on Cosplay Interview with Roland’s Forge